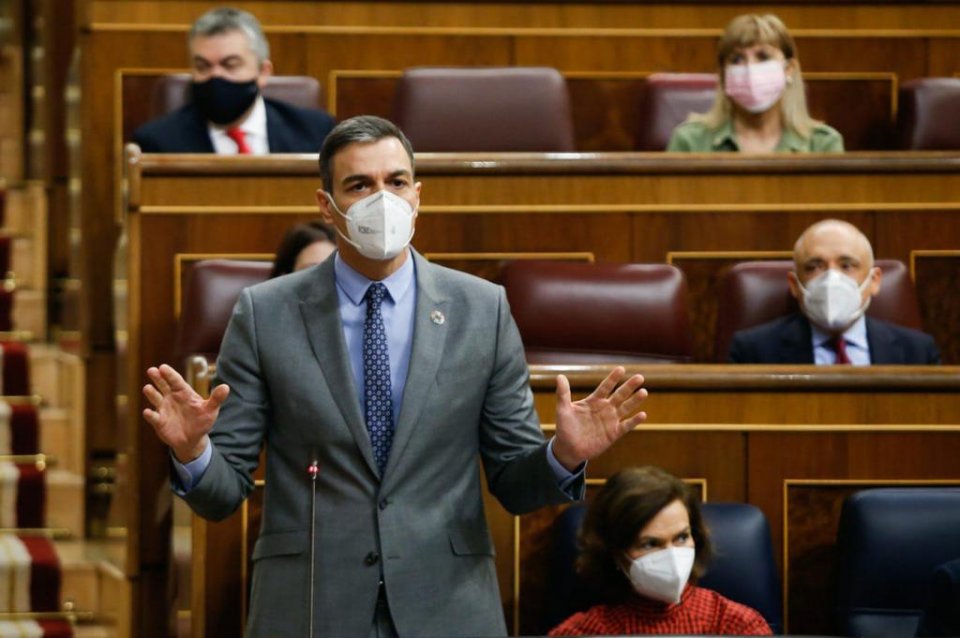 Spanish Prime Minister Pedro Sánchez has said that his government will confront all forms of violence and that it is ‘an attack on democracy’, following the third night of protests over the jailed rapper Pablo Hasél.

‘Democracy never, ever justifies violence,’ the PSOE socialist leader said in his first public condemnation of the protests, but which had been applauded by his government’s junior coalition partner, the left-wing Podemos group. This in turn has fuelled the right-wing opposition to call for Sánchez to break with Podemos and remove its leader, Pablo Iglesias, from the cabinet.

Protests that quickly turned violent first erupted on Tuesday night after police detained Hasél, 32, who had barricaded himself in the University of Lleida in an attempt to avoid going to jail in a case that has raised concerns about free speech in Spain.

‘Violence is an attack on democracy. Consequently the Spanish government will confront any kind of violence to ensure people’s safety,’ Sánchez said on Friday.

‘In a full democracy – which Spain is — the use of any kind of violence is unacceptable. There is no exception to this rule,’ Sánchez said, in reference to remarks by Iglesias who had said Hasél’s imprisonment raised questions about Spain’s democracy.

Spain’s Interior Minister Fernando Grande-Marlaska also thanked police for their efforts on Friday, saying they would continue to ‘guarantee the rights and freedoms of all society against a minority whose misguided idea of rights makes them have recourse to violence’.

About 90 people have been arrested and more than 100 injured during three nights of protests since rapper Hasél was arrested earlier this week. He has finally begun a 9-month prison sentence after his conviction in 2018 for the glorification of terrorism and slander to the crown in his lyrics. The sentence has led the PSOE–Podemos coalition government to also announce that it would make free speech laws less restrictive – but the move will not affect Hasel’s jailing.

Amnesty International also published a statement insisting that ‘no one should be criminally convicted of tweeting or singing something disgusting or scandalous’, highlighting that in Spain around 70 people have been convicted under the law in 2018 and 2019.

During this week’s protests, the Podemos group has spoken out in support of the protestors and criticised the police after one protestor lost an eye, allegedly due to a foam bullet fired by riot police. Podemos MP Pablo Echenique tweeted his backing for the protestors as the violence started to erupt in Madrid and Barcelona on Wednesday night, stating, ‘All my support to the young anti-fascists who are demanding justice and freedom of expression in the streets. Yesterday in Barcelona, today at Puerta del Sol [in central Madrid]. The violent mutilation of the eye of a protestor must be investigated and responsibilities must be decisively clarified.’ His tweet provoked a flood of condemnation from across the political spectrum.

On Thursday, the Podemos parliamentary spokesman Jaume Asens said the party had filed a petition for an ‘urgent’ and ‘total pardon’ for Hasél and another rapper Valtonyc, who fled to Belgium in 2018 to avoid trial on charges of ‘glorifying’ terrorism. Pardons are a bureaucratic process and also need the final approval from the Spanish government itself.

Any pardon and release from prison for Pablo Hasél could be further complicated following a decision by a court in Lleida in Catalonia this week. The court has upheld another two and a half year prison sentence imposed on Hasél in March 2020, for having threatened the witness in the trial of a police officer for an alleged assault on a minor, in which the agent was acquitted. Hasél was sentenced to 1 year and 9 months in prison for obstruction of justice, and a further 9 months for threats. An appeal may still be filed.

Students in at least four Spanish cities staged peaceful demonstrations against the imprisonment of Hasél on Friday morning. The same group that called this week’s violent protests in Barcelona was reportedly organising another gathering in the city for Friday evening.

ALSO READ (17/2/21): Protests and vandalism follow jailing of rapper, with 14 arrests and 33 injured