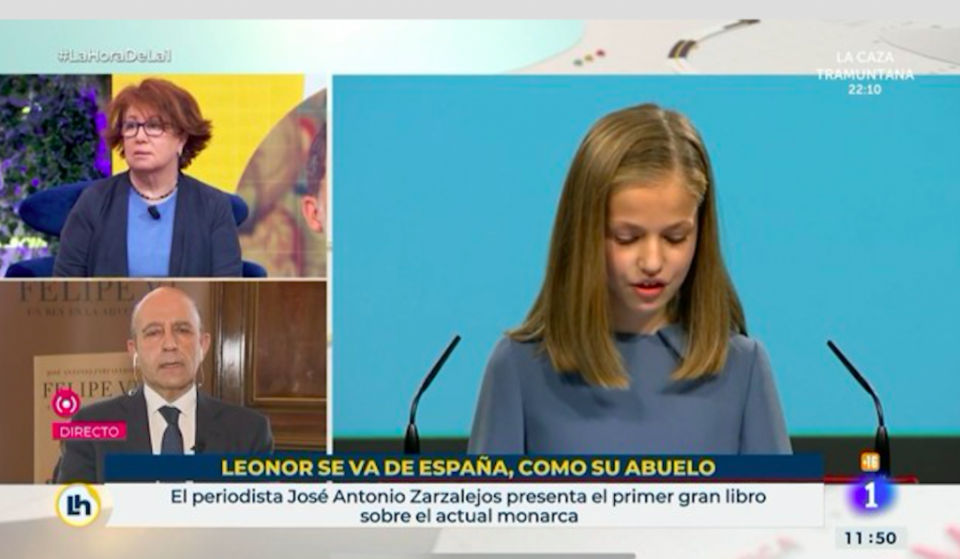 Spain’s public broadcaster RTVE has issued a statement to say it ‘deeply regrets’ a headline that read, ‘Leonor is leaving Spain, like her grandfather’, to accompany the news announced on Wednesday that the heir to the Spanish throne, 15-year-old Princess Leonor, is going to study at a new school in Wales.

During a segment on a lunchtime programme, La Hora de La 1, the state broadcaster put up a headline stating, ‘Leonor is leaving Spain, like her grandfather’. Leonor’s grandfather is Spain’s disgraced former king, Juan Carlos I, who left for the United Arab Emirates in August 2020 following scandals and allegations of financial impropriety.

Leonor de Borbón, whose official title is the Princess of Asturias, is the eldest of two daughters of king Felipe VI and queen Letizia. Spain’s royal household had issued a statement on Wednesday morning to announce that Leonor is to attend UWC Atlantic College, based at the 12th-century St. Donat’s Castle in the Vale of Glamorgan, in south Wales.

Leonor, who turns 16 at the end of October, will begin her two-year course at the boarding school in the summer. Her parents will personally meet the course’s full cost of £67,000 (approximately €76,000), the statement also stressed.

The strapline during the state broadcaster’s La Hora de La 1 programme stayed on screen for almost two minutes while the decision about the heir to the throne’s education was discussed, with screenshots of the headline quickly circulating on social media. Following the broadcast, the right-wing People’s Party (PP) accused RTVE of attacking the crown. ‘We demand a correction and that responsibilities be clarified. RTVE cannot be the official channel of the government [the left-leaning PSOE–Podemos coalition]. It has to be that of all Spaniards. Enough manipulating.’

Soon after the broadcast, RTVE issued an apology and an official statement. Rosa María Mateo, who currently directs the station as its sole administrator, said she ‘deeply regretted the serious error that occurred’ and that she ‘had taken immediate measures so that those responsible are relieved of their positions’. The statement said that the banner had been ‘a serious irresponsibility that cannot cloud RTVE’s unwavering commitment to the defence of constitutional values, to institutions of the State and, above all, to the Crown.’

However, RTVE’s statement has since prompted further political debate, with Pablo Echenique – a prominent member of the left-wing Podemos group, the partner to the PSOE in Spain’s governing coalition – questioning the motivation of the apology. Echenique tweeted his concerns over people being relieved of their posts, asking whether Felipe VI believes ‘it’s okay to dismiss workers so as not to bother him’. He has said that the Podemos party, which is in favour of abolishing the monarchy, will ask Rosa María Mateo in parliament if she had received a call from the royal household pressurising her to dismiss members of staff.

The UWC Atlantic College that Leonor is to attend is for students aged 16-19 years, and its website states that it seeks to ‘inspire changemakers’ who want to work for the common good. It looks for students who ‘can navigate the complexity of life and (reach) beyond easy answers’. The Spanish royal household statement also noted the school’s ‘open and critical approach’.

St.Donat’s Castle, where the school is based, is set in 122 aces of woodland and farmland. It became the home of the Amercian newspaper magnate William Randolph Hearst in 1925, after he saw a feature on it in a magazine.