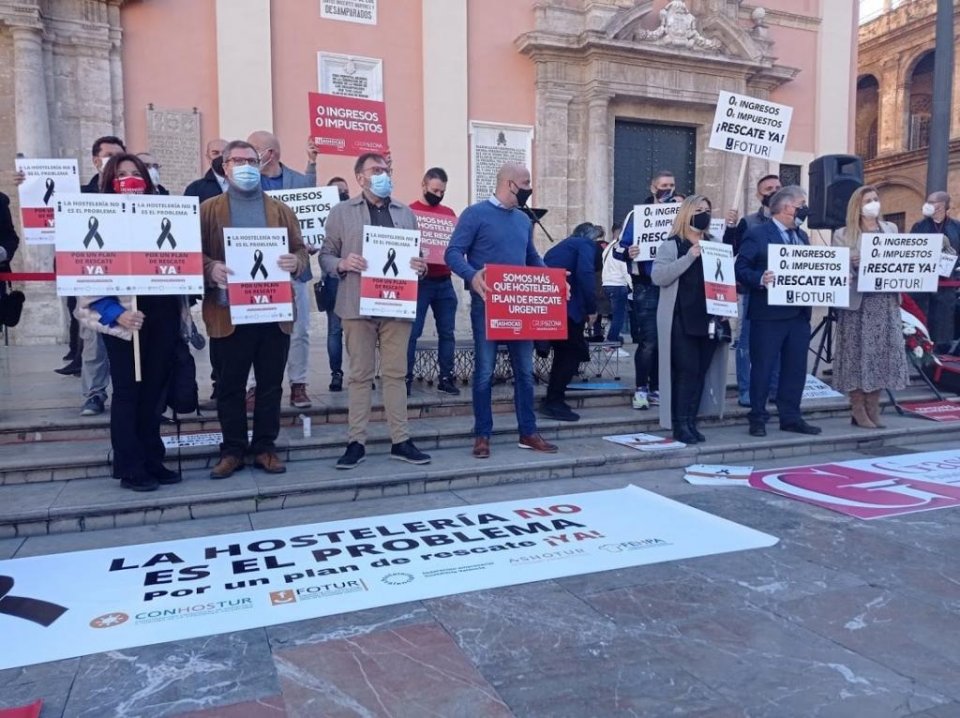 Instead of putting on fancy dress for carnival or sharing a romantic Valentine’s dinner with that special someone, this weekend has been like much of the past year … don’t go out, stay at home, only see the people you live with, watch Netflix and so on. But, despite the monotony, there are signs of hope; infection rates continue to decrease, recovery rates remain high, and while the numbers of those who have died still make for difficult reading, there are marginally fewer than last week. The vaccine programme is back on track and the effects are already being seen in lower infection rates in residences. Nonetheless, it’s still too early to think about easing restrictions, and on Thursday evening the Valencian government agreed to extend the current tough measures until at least 1 March.

Members of the hospitality industry in the province of Castellón, however, are opposed to the extension of the restrictions which have seen all bars and restaurants closed since midnight on Wednesday 20 January, and have vowed to reopen on Tuesday, when the original measures were due to come to an end, despite the prospect of fines of up to €60,000. Some 2,000 bar and restaurant owners are believed to be planning to open their doors in defiance of the law.

However, the Valencian hospitality and tourism business federation, Conhostur, along with its provincial branch, Ashotur, have publicly denounced such action and asked their members to abide by the law.

Conhostur have also written to Valencian president Ximo Puig, asking him, after nearly a year of restrictions, to set up a working group with the different departments of his administrations to actively participate in the reopening of the sector.

In the open letter, the federation also said that after almost a month of being closed, no real help had arrived for the sector and insisted that the budget for the Plan Resistir [government funding to help the self-employed and small businesses] needed to be larger, especially if restrictions were to be extended.

They also demanded evidence from the government justifying the closure of bars and restaurants and said that so far they had been given no reports showing that hospitality was the main cause of infections. They also pointed out that illegal parties, as well as gatherings in public spaces on beaches and in parks, continued to happen.

On Thursday workers in the hospitality industry came to Valencia to protest, banging pots and pans loudly, outside the Palau de la Generalitat. The government has announced that next Tuesday the health and tourism ministers, Ana Barceló and Francesc Colomer respectively, would meet with members of the hospitality industry to begin working on the ‘de-escalation’ process.

Yesterday marks a year since the first death from Coronavirus in Spain and also the Valencia region. On 13 February 2020 a 69-year-old man from the Valencian town of l’Eliana, died in hospital from pneumonia. The man, who had recently returned from a trip to Nepal, was admitted to hospital and his pneumonia surprised doctors by how rapidly his state deteriorated. Samples taken from the man were kept by medical staff and tested 20 days after his death, posthumously revealing him to be Spain’s first death to Covid-19. Since then, according to official figures, there have been 5,800 deaths in the Valencia region, which currently has the highest accumulated incidence rate in the country for the past two weeks, 690 per 100,000, although this figure is half of what it was a month ago.

This week there were 337 new outbreaks, with the majority still from socialising, 224. Work-related outbreaks remain low at just 26 but those related to education are on the increase accounting for a third, 107, despite schools being hailed as the safest places for the region’s children.

Meanwhile cases of flu have plummeted. According to health department figures released this week, in January last year 1,651 positive flu samples were recorded in the region. In January 2021 there were just three. Likewise, the incidence rate of flu cases in the last week of January this year was 12.7 per 100,000 of the population. In the same period in 2020 it was 274.8 and in 2019 that figure was 482.1.

Javier Díez, the Fisabio Foundation’s director of Vaccine Investigation, said that mass vaccination this winter had played a part but that social distancing and hygiene measures to combat Covid-19 were also factors, as was ‘viral interference’, also known as superinfection resistance.

Watching the news from the UK where upwards of 14 million people have already been vaccinated, you may well be thinking What about me? When will I be called?

The Valencian vaccination programme began with great hope on 27 December when 81-year-old Batiste Martí became the first person to receive the jab in the region, and the health department had great plans for the roll out. However, the plans were stalled due to production issues with the pharmaceutical companies, there were stories of residences having their vaccination appointments cancelled more than once for lack of doses and news headlines have been filled with tales of investigations into high-ranking officials jumping the vaccine queue, rather than statistics of how many vulnerable groups were now safe.

So far the main groups to be vaccinated have been those in residences, followed by frontline health workers. The good news is that all residents have now been vaccinated, except for around 5% who are quarantining or suffering from Covid-19. However, due to the shortage of Pfizer vaccines many over-80s are still waiting to be called, my parents-in-law included.

This week, with the arrival of 9,690 doses of the AstraZeneca-Oxford vaccine, the task of vaccinating second line health workers, up to the age of 55, has begun. Although the AstraZeneca jab has been approved for use on all ages in the UK, in Spain it will not be administered to citizens aged over 55 – so the doses will now be given to groups lower down on the priority list. For instance, this week Valencia’s La Fe hospital has been vaccinating high-risk transport and cleaning staff.

The next groups to be called will be firefighters, police officers, civil guards, members of the armed forces as well as infant and primary teachers. In the meantime, over 80s will continue to be called as and when doses of the Pfizer-BioNTech and Moderna vaccines arrive. So if you’re expecting a call, keep your phone switched on.

Latest figures (up to 12 Feb) show that Spain overall has now received 2,914,755 doses of Covid-19 vaccines (from Pfizer-BioNTech, Moderna and AstraZeneca), and that 2,423,045 jabs have been administered. This is 83.1% of total vaccines received. 1,000,485 people have now received a second jab. In a separate report, we have published the amount of vaccines received and administered for each region in Spain. Latest: Covid-19 Vaccinations in Spain

Click here for all our reports on Coronavirus in Spain and for specific reports related to Covid-19 Vaccinations.

The Galaxia Hung exhibition, which comprises 14 sculptures by the artist Hung Yi and inspired by the culture and daily life of Taiwan, has been extended until 18 April and can be visited outdoors in the Ciutat de les Arts i les Ciències.

Coinciding with the exhibition, a special Valentine offer of 2 x 1 on Science Museum or Hemispheric tickets has been launched and received a great response. To enter, follow the official Instagram account of the City of Arts and Sciences (Ciutat de les Arts i les Ciències) and upload a photo of the sculpture ‘El amor del cisne’ from the Galaxia Hung exhibition with the hashtag #amorCAC and tag @ciudadartesciencias. The offer is open until 28 February and tickets are valid until 31 March 2021.

Even though carnival celebrations have been cancelled, some schools allowed pupils to come to class in fancy dress on Friday and perhaps I wasn’t the only mum who had to get up extra early to do a Frozen hairdo, which I was quite surprised survived the day. At my daughters’ school I was particularly impressed by the way one secondary class, who came as rugby players and cheerleaders, turned the traditional stereotypes on their head with the girls dressed as the rugby players and the boys, complete with red tutus, were the cheerleaders. Very 2021.

Valencia’s five best takeaways to tide you over during lockdown

I don’t think that it is something unnatural that the deaths are rising. Governments requests people to stay at home, no sports facilities are open, masks can make more harm than use, increase in depression, anxiety and stress and finally immune system is dropping results in bodies can’t fight virus. Most probably humanity would fight the virus better if their body would naturally develop immune.. But no, because politicians around the world falls into high risk category we all are suffering…