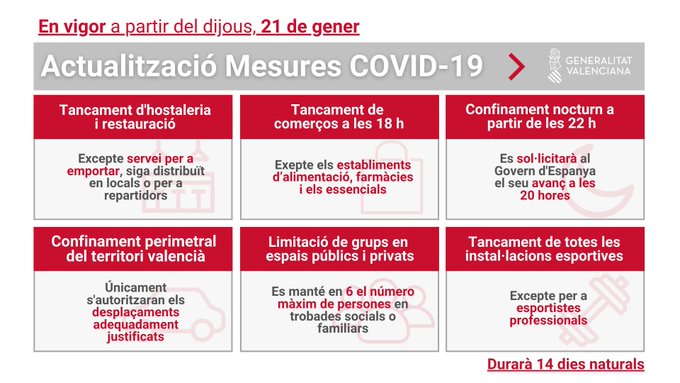 The Valencian government has announced tighter restrictions due to the increasing pressure on hospitals and record numbers of daily deaths from Coronavirus.

The new measures include the closure of all bars and restaurants, except for take-away services, as well as the closure of all sports centres, clubs and gyms, with the exception of those for professional athletes. All shops will now close at 6pm, except for those deemed essential, such as food stores and pharmacies. These measures will come into effect from midnight tomorrow [Wednesday 20 January] and will remain in place for 14 days.

The government will also ask for the 10pm curfew to be brought forward to 8pm. The request will be made to the central government in Madrid on Wednesday. Other regions in Spain have made similar requests. At the moment, the current State of Alarm in Spain stipulates a nighttime curfew for the whole country from 11pm-6am, and regional authorities are only allowed a margin of one hour to bring forward or back these times. The State of Alarm also doesn’t cover measures to impose home confinement – something else that other regions have asked for.

Other restrictions, such as a maximum of six people in any social or family gathering will remain in place in Valencia, as does the perimeter closure of the whole region.

Valencian president, Ximo Puig, laid out the new measures at lunchtime today [Tuesday], after an interdepartmental meeting for Covid-19 prevention and action. He said it was ‘with pain’ that he had to tighten the measures which should have adverse effects on industries which have already been the most hard hit, but that he was ‘obliged’ to take the action given the numbers of hospital admissions.

Talking about a total lockdown, he said that, apart from the fact that it wasn’t within his power to call one, he highlighted the reasons against it being the negative effects on physical and mental health as well as the resulting inequality.

Anyone hoping for schools to be locked down will also be out of luck, as Puig reiterated the government’s message that education centres won’t be closed, saying that the classrooms have proven themselves to be the safest places for youngsters.

He made a plea for ‘total prudence’ from everyone, asking citizens to have as few social interactions as possible, and said that now bars and restaurants are closed, people must not start meeting up in their homes.

He ended with some words of hope, saying that ‘we are on the way out’ of the pandemic and reminded citizens that the Valencian region is the most advanced in the country in terms of its vaccination programme.

Valencian health minister, Ana Barceló, spoke after Puig giving more details of the restrictions. She said that ‘we owe it to all those who are working on the frontline to make a huge effort.’

Barceló also announced that the perimeter lockdown would be lifted on the 29 towns which had been under tighter restrictions, as they would now come under the new measures for the region. She commented that only in four of the towns had the numbers improved while in the other 25 not only had they not flattened the curve of infection rates, they had actually increased.

From 15-M to Podemos on the ‘Sobremesa Podcast’

My daughter is a student in valencia and she had fallen from chair and hand broken.she wants to come home in kerala,sindia..Is it possible for her to travel to barcelona and take emirates special flight to India via dubai? Can anyone guide?

My daughter is a student in Valencia. She fell down from chair and hand broken.She desires to have a come back to home in Kerala,S.India.Is it possible for her to travel to barcelona to take a flight in Emirates air line which has airbubble arrangements with dubai and india? Can anyone guide her to come home?