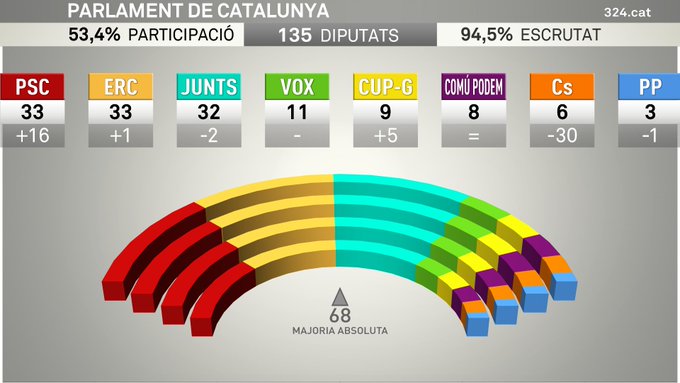 Catalan pro-independence groups have secured over 50% of the votes for the first time in the Catalan elections held on Sunday 14 February – despite the pro-union Catalan Socialists (PSC) securing a narrow win of votes overall.

With 135 seats in the Catalan Parliament and 68 required for an overall majority, the pro-independence bloc have now secured 74 seats between them. In 2017 they had a combined total of 70 seats.

The Catalan Socialists (PSC), headed by Spain’s former health minister Salvador Illa, have won 33 seats. The party won 17 seats in the elections held in December 2017. With 95% of the votes counted, the PSC had secured over 625,000 votes compared to the ERC’s 580,000. Both groups were set to hold 33 seats each.

The other big news is that the far-right Vox party enters the Catalan Parliament for the first time, with 11 seats – the fourth largest party in Catalonia. The party has won more seats than the Cs and PP combined.

Catalunya en Comú-Podem (CatECP), part of the Podemos group who make up the coalition in Spain’s central coalition government with the PSOE socialists, maintained their position with 8 seats.

Over 5.6 million people were eligible to vote, including some 250,000 Catalans living abroad, with polling stations open from 9am to 8pm on Sunday. The elections went ahead despite fears about the Covid-19 pandemic, after the date to hold the vote had been confirmed by Spain’s High Court in Catalonia (TSJC), overturning the Catalan government’s plan to move it to 30 May because of the health crisis.

Turnout for the 2021 Catalan election was just over 53%, the lowest in modern times, with 95% of the votes counted. The pandemic has been cited as a major factor for the dramatic drop in the number of ballots cast. Turnout was over 79% in 2017. Since the return to democracy after the Franco dictatorship, the previous lowest turnout in Catalonia was 54.87% in 1992.

People at high risk from Coronavirus were advised to vote between 9am and 12 noon, while those in quarantine – around 96,000 according to the Catalan health authorities – were told to vote between 7pm and 8pm, during which time election officers were wearing full protection gear.

Ciudadanos = centre, PP = centre right and Vox = right.Those who cast their votes for centre/centre right or right have lost patience with Ciudadanos and can´t work out what PP´s real policies are. Down in Andalusia in a village ( Cartaya) Vox polled one vote a couple of local elections back and then in the following elections received 275 votes