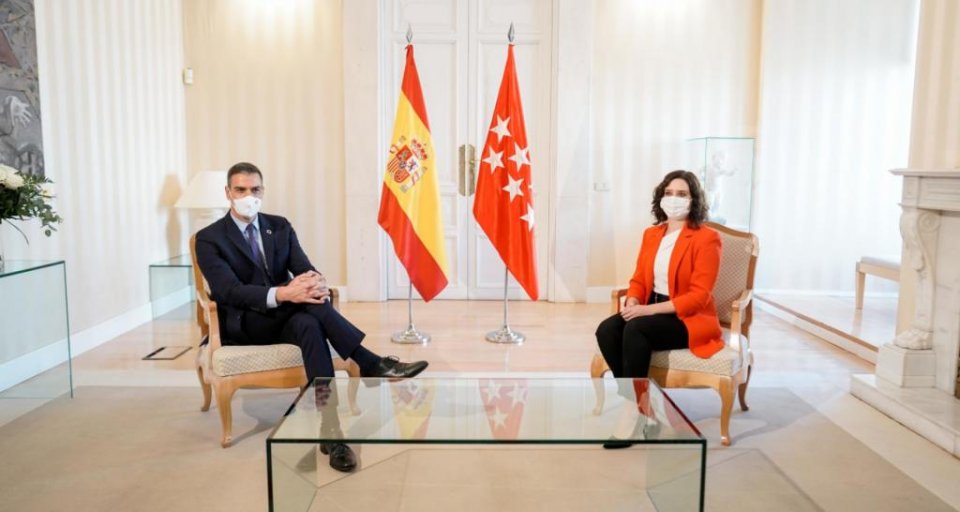 Spanish Prime Minister Pedro Sánchez met on Monday with the president of the Madrid regional government, Isabel Díaz Ayuso, to discuss and offer help with the worsening situation of Coronavirus (Covid-19) in the Madrid region.

Madrid has imposed partial lockdown measures on nearly one million citizens living in 37 areas from Monday – including neighbourhoods in the city of Madrid itself – in a further attempt to stop the spread of the virus. The measures were announced on Friday by Ayuso.

Residents of the 37 areas, mainly densely populated, low-income neighbourhoods in the south of Madrid, are only allowed to leave their areas to go to work, seek medical care or take their children to school. The measures will remain in place for at least 14 days from Monday 21 September.

All bars and restaurants in the 37 areas have also had to reduce their capacity to 50%. Residents affected are allowed to move around freely inside their zone but no-one from outside is allowed in.

The weekend saw a number of protests against the new restrictions in the areas affected in Madrid, with citizens claiming that the measures were ‘discriminatory’.

Social gatherings of more than 6 people are now also banned in the entire Madrid region, down from 10 currently, as part of the new measures.

Meeting with Ayuso on Monday, the Spanish prime minister warned of ‘very tough weeks ahead’ and said that, ‘we must be prepared to consider other scenarios, if necessary’. He added that Madrid ‘needs a special plan’.

Since Spain entered its New Normality phase on 22 June after the central government ended the ‘state of alarm’ that had been in place from 14 March, responsibility for public healthcare and managing the Coronavirus pandemic has been left in the hands of Spain’s 17 regional governments.

During the central government’s four phased plan to relax the country’s lockdown restrictions, the Madrid regional government under Ayuso criticised the prolonged ‘state of alarm’ and lockdown measures – and even threatened legal action when Madrid was not allowed to relax certain restrictions and move from one phase to another.

Sánchez announced on 25 August that the regional governments of Spain could also request ‘regional states of alarm’ if required to combat the virus. But while many regions in Spain have applied further restrictions, particularly focused on nightlife and social gatherings, not one region has asked for a state of alarm.

‘Together we will prevail,’ Sánchez said at the press conference following the meeting with Ayuso on Monday. ‘This is an epidemiological battle, not an ideological one.’

Sánchez and Ayuso have agreed to create a permanent joint Covid-19 Working Group that will make recommendations on a weekly basis to the Spanish Health Minister, Salvador Illa, as well as to Madrid region’s health chief, Enrique Ruíz Escudero.

Despite their differences during Spain’s state of alarm, both Sánchez and Ayuso ‘understand that the co-ordinated action of the administrations is essential, reinforcing the co-governance mechanisms in order to expand the response capacity’, a statement read.

Both have agreed on the need to reinforce Madrid’s primary healthcare system, as well as extra contact and tracing teams, disinfection personnel – as well as police to oversee that the partial lockdowns are observed.