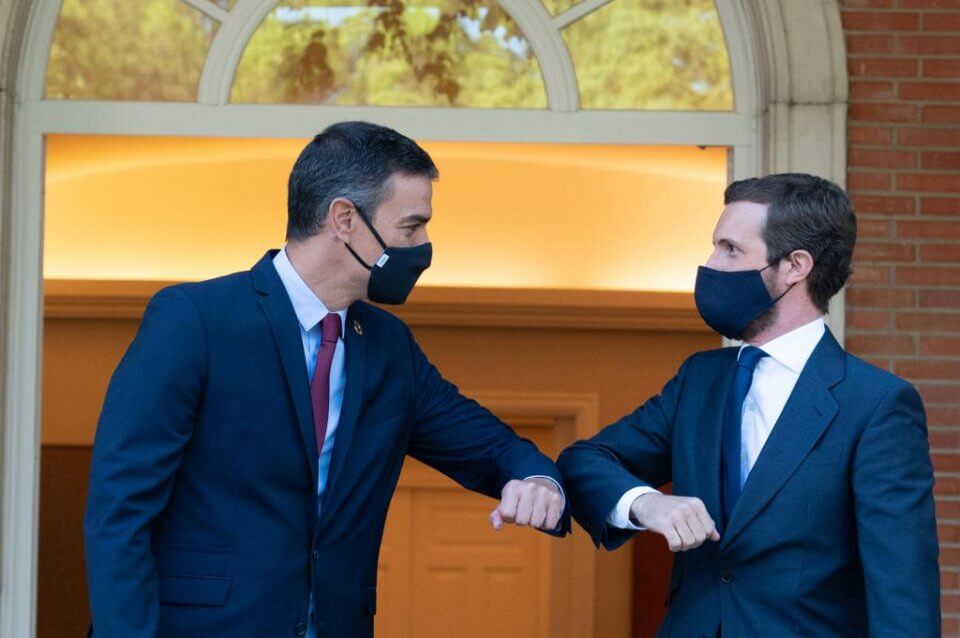 Spanish Prime Minister Pedro Sánchez called for ‘unity of action’ and an end to ‘party squabbling’ as a battle front against the Coronavirus pandemic that ‘does not distinguish between ideologies’, during a speech he delivered to business leaders in Madrid last Monday.

But then following a meeting in Moncloa on Wednesday that Sánchez held with Pablo Casado – the leader of the right-wing People’s Party (PP) and the main opposition party in Spain – Casado remained adamant that he would not do a deal with the Spanish government on the forthcoming budget, as long as the PSOE continues to govern with the Unidas Podemos group.

‘We will lend support,’ tweeted Casado (see below), after the meeting, ‘if the other does not support radicals.’

Sánchez, leader of the PSOE socialist party, currently heads a coalition government in Spain with left-wing Unidas Podemos, led by Pablo Iglesias. Together they have 155 seats in the 350-seat chamber, 120 PSOE and 35 Unidas Podemos – the latter being an alliance between Podemos and the United Left (IU) party.

In his ‘National Recovery, Transformation and Resilience Plan’ speech at the Casa de América in Madrid last Monday, Sánchez had called for unity, as well as social and territorial cohesion, to overcome the crisis caused by Coronavirus.

It follows on from his previous appeals for a cross-party ‘Moncloa Pact’ for Spain’s recovery programme from the pandemic.

‘Spain can do it: recovery, transformation and resilience’ was the title of the speech delivered by Sánchez on Monday to business leaders, representatives from civil associations and trade unions, as well as sectors linked to digitalisation, ecological transition, culture and the third sector.

Sánchez had outlined his vision of Spain in the future and ‘the need for unity and a drive from everyone to ensure the social and economic recovery following the ravages caused by the Covid-19 crisis’.

He said that Spain needed four transformations that were ‘more necessary than ever’ after the outbreak of the global pandemic, that had also hit Spain ‘at a health, social and economic level’.

The national recovery plan was presented by Sánchez as a roadmap and in response to the challenges facing Spain over the next decade – a plan that will also be presented to Brussels and aims to boost the long-term growth of the Spanish economy at above 2%.

The government’s plan also seeks to speed up the transformations that Spain already needed before the pandemic and that, according to Sánchez, ‘it now needs even more urgently’.

The four areas presented by Sánchez are digital transformation – ‘to boost the capabilities of our citizens and the potential of our companies’ – ecological transition, as well as social and territorial cohesion ‘to close the gaps that cause inequality’.

‘Half of Spain cannot overcome this, with the other half of the country turning its back on it,’ said the prime minister, who also called for party squabbling to be banished in the fight against the virus.

Sánchez appealed for a climate of political stability and unity, something that he recalled ‘does not require anyone to abandon their convictions, or even their preferences’, but rather that ‘must combine these convictions, these preferences for the greater good, which is the recovery of the country’.

On Wednesday, however, PP leader Pablo Casado spent two hours at Moncloa with Sánchez, and then announced afterwards that his party would not negotiate the forthcoming budget with the government. Nor would it assist in agreeing new appointments that are overdue in Spain’s key institutions, such as the Constitutional Court, the CGPJ legal watchdog, the governing board of the state broadcaster RTVE and the Ombudsman’s Office.

The PSOE-Podemos coalition government does not have a working majority in the Spanish Congress and needs support (or abstentions, depending on the matter under debate) from other groups in order to pass legislation – as was clearly shown with the six debates to extend the country’s ‘state of alarm’ until 21 June, initially agreed for just two weeks from 14 March.

Government spokeswoman María Jesús Montero accused the PP of ‘going against the Constitution’ and of refusing to recognise the legitimacy of the coalition government.

Casado, however, claims that the Unidas Podemos group is ‘against the constitutional regime’ of Spain and also drew attention to the fact that it is currently immersed in a court probe regarding alleged irregular financing.

‘If we are going to negotiate with someone who is calling for the demolition of the Constitution, that is a bad start,’ said Casado about the Unidas Podemos group, after his meeting at Moncloa. ‘If there is a party that is implicated in illegal financing, it is the government that has the problem.’

Recently, following the news that Spain’s former king Juan Carlos I had ‘fled abroad’ to avoid the corruption scandals under investigation the leader of Podemos, Pablo Iglesias had said that, ‘Juan Carlos de Borbón’s flight abroad is an unworthy act of a former Head of State and it leaves the monarchy in a very compromised position. Out of respect for Spanish citizens and democracy, Juan Carlos I should answer for his actions in Spain and to the people.’

Casado tweeted after his midweek meeting with Sánchez to say, ‘After 7 months I meet with Sánchez to reach pacts against Covid. To get the Spaniards out of the tunnel, we will lend support, if the other does not support radicals. I am not one [to say] “no is no” but I have to say “not like that”. The ball is in your court.’

Sánchez also met with Inés Arrimadas, the leader of the Ciudadanos (Cs) party, at Moncloa during the week.

‘We will all be judged for our actions during the pandemic,’ Arrimadas said after the meeting, during which the possibility of her party supporting the budget plan was discussed.

By contrast to the leader of the PP, Arrimadas confirmed her ‘firm and real’ commitment to negotiate a ‘moderate, sensible’ budget, one that incorporates the financial help from the EU to deal with the pandemic and ‘that does not contain ideologies contrary to what this country needs.’ She accepted that the Unidas Podemos group would form part of the budget talks.

Madrid reinforces its measures against Covid-19, as infections continue to rise