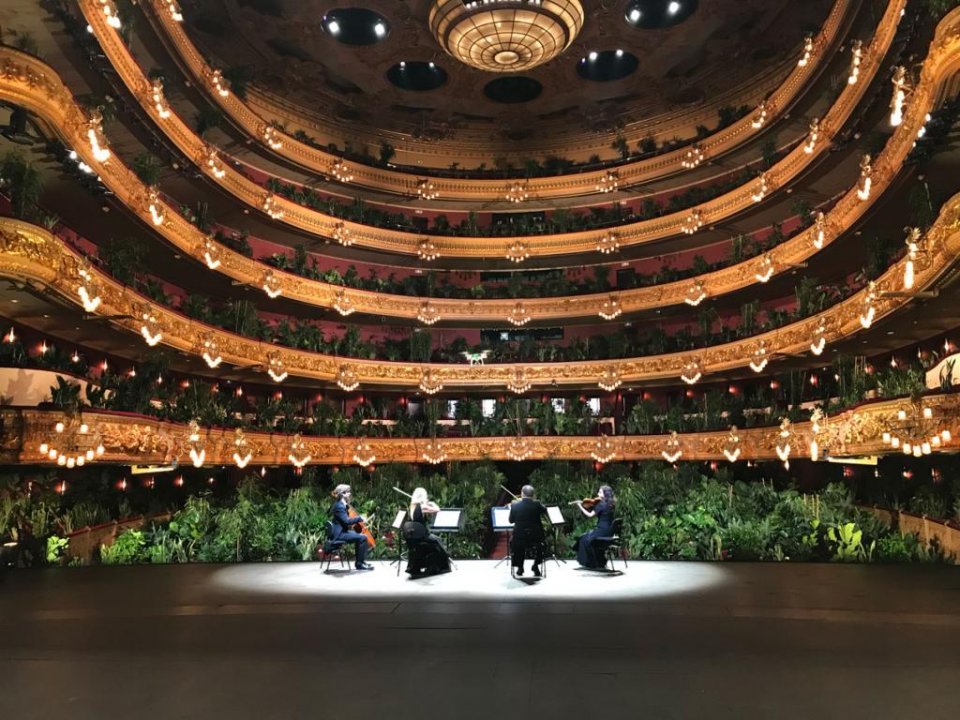 The very first concert after the end of the ‘state of alarm’ and the start of the ‘New Normality’ held at the famous Gran Teatre Liceu opera house in Barcelona, was held before a packed house … of plants.

2,292 plants were placed in the audience seats on Monday evening, whilst a string quartet performed Giacomo Puccini’s ‘Chrysanthemums’ in honour of all healthcare workers and their efforts during the Coronavirus (Covid-19) pandemic.

Brainchild of conceptual artist Eugenio Ampudia, the concept was created to show how nature has flourished during the lockdown, and to reflect on the human relationship with it.

Ampudia wanted the opera house to be ‘alive’ even if people weren’t permitted to be in the audience. ‘Why not bring plants into the Liceu to turn it into a living space, even when there’s nobody there?’ he said.

‘The world we live in now is not the same as that of 90 days ago,’ said Ampudia, reflecting on how the pandemic has changed the world, ‘and that has to be reflected in the things we do.’

He said that the idea for the concert came to him ‘naturally’ after observing nature flourish while people were forced to stay home during the lockdown.

The Liceu in Barcelona is one of the largest and most important opera halls in the world.

The Liceu said that following the concert, the plants are to be gifted to medical professionals at Barcelona’s Hospital Clínic, who worked at ‘the toughest front in a battle unprecedented for our generations’.

The concert was an initiative from the Liceu, the artist and the Max Estrella gallery, with additional sponsorship support. Before the concert started, the ‘audience’ of plants were even asked to switch off their mobile phones.

Watch it all here: