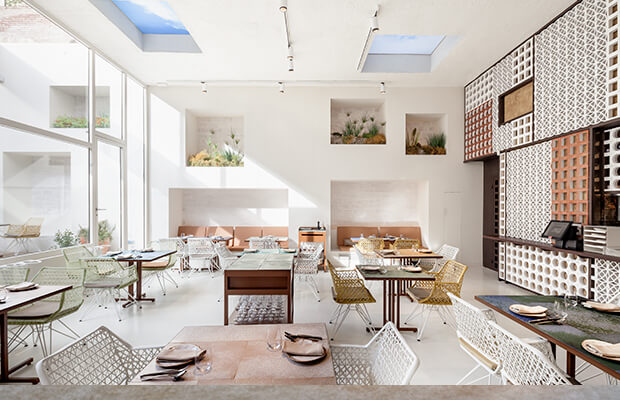 Following on from our first article about The World’s 50 Best, an organisation that ranks restaurants around the world, we now focus on Disfrutar in Barcelona.

Expect the unexpected: Gazpacho in sandwich form? Crispy egg yolk? Liquid salad? Hare bonbon? If such seemingly paradoxical dishes do not pique your interest, then Disfrutar is not the restaurant for you. But for most who attend this unique Barcelona restaurant, such surprises form part of a thrilling rapid-fire, roller-coaster ride of a dining experience.

Who’s behind the magic: Three chefs – Oriol Castro, Mateu Casañas and Eduard Xatruch – all of whom held senior positions in the creative culinary team at the legendary El Bulli prior to the restaurant’s closure in 2011. The trio opened the more casual Compartir in Cadaqués on the Costa Brava in 2014, before adding Disfrutar in Barcelona to the mix in late 2014.

A word on the space: In contrast to the hyperactive and avant-garde menu, which can run to over 30 courses, the dining-room appears relatively simple and serene: light-filled, white and opening onto an outdoor terrace. The overall design is no less creative, however, incorporating a ceramic-lined tunnel effect as guests travel from the narrow entrance area almost through the busy kitchen into the wider restaurant space.

Multiple trophy-winner: Disfrutar doesn’t disguise its obvious debt to El Bulli, but it has also succeeded in writing its own gastronomic story, delivering brave and playful dishes awash with both flavour and wit. In 2017 it picked up the Miele One To Watch Award from The World’s 50 Best Restaurants and in 2018 it followed up by making its debut on the list itself as the Highest New Entry at No.18.