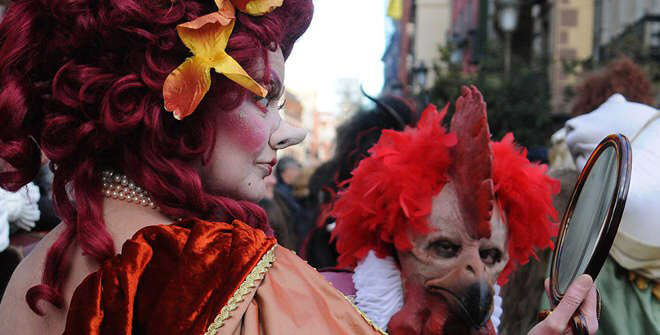 The week of Carnival gets going in Spain from this Thursday, with parades, concerts, dances, dressing up – and much more happening all across the country.

Below is a selection of what’s going on in Madrid, Barcelona and Bilbao:

In the Spanish capital, Carnival (Carnaval in Spanish) this year runs from 1 to 6 March and once again, much of the fun takes place in one of the lesser-known neighbourhoods; in this case La Prospe in the Chamartín district.

The opening event is an evening of live music in Plaza de Prosperidad and Parque de Berlin. The park is also the setting on Saturday for the big parade (morning) and a Masquerade Ball starting at 5.30pm.

On Sunday Parque de Berlin hosts two traditional Madrid Carnival events: the tossing of the rag doll (11am) and a performance of street musicians and artists (noon).

On Ash Wednesday, another tradition takes place that brings the week to a close: the Burial of the Sardine. In Madrid this unique event, whose origins are something of a mystery and which appears in one of Goya’s paintings, involves a procession where a (pretend!) fish is carried through the streets to be buried in the Casa de Campo park.

A number of local organisations hold competitions on Thursday to see who can make the best omelette. On Saturday more than 20 parades take place in different neighbourhoods of the Catalan capital, while over the weekend many towns across the region hold their own events.

The nearby coastal town of Sitges is particularly renowned for its exotic and extravagant parades, which feature colourful floats and flamboyant costumes – certainly the most liveliest town to celebrate the carnival in Catalonia, and probably across the whole Spain.

Barcelona has its own Sardine Burial processions, with different ceremonies staged on Wednesday 6 March in various districts.

In Bilbao, Carnival (Aratusteak in Basque) week gets going with the trial of Farolín and Zarambolas, two of the city’s most illustrious characters, who are arrested at City Hall then taken to Plaza Nueva.

On Saturday in Plaza Ensancho there are workshops for kids and inflatable castles, while in the afternoon the popular costume competition takes place with a parade in Plaza Circular.

Other highlights include processions of ‘giants’, family shows and fireworks. The Burial and Cremation of the Sardine are also part of the celebrations although in Bilbao it takes place on the Tuesday of Carnival week.