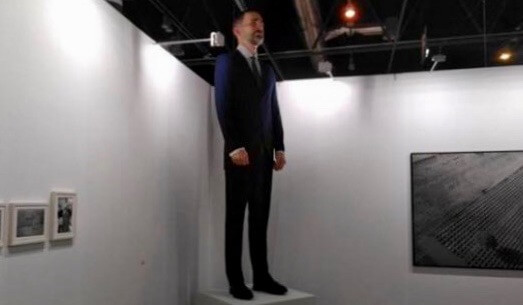 Want to burn a statue of Spain’s King Felipe VI? For 200,000 euros, it’s a deal – a contractual obligation, even – at Madrid’s ARCO contemporary art fair, where two artists known for courting controversy are showing a giant effigy of the monarch.

It is on sale for 200,000 euros, with a special clause obliging the buyer to ‘commit to the artwork being burnt’, Luis Navarro, who works with Santiago Sierra, one of the artists, told the AFP news agency.

‘The specificity of this sculpture is that it isn’t conceived to endure in time, to be collected, but for the pleasure of being destroyed,’ said Navarro.

Criticised as a ‘provocation’ by the conservative press in Spain, the artwork is on display at the ARCO fair. And the king himself will open the fair on Thursday.

This isn’t the first time that Sierra and the other artist, Eugenio Merino, have stirred controversy.

As the fair opens this year, several Catalan leaders are on trial in Madrid for their part in Catalonia’s 2017 independence bid.

Last year, an installation by Sierra which referred to Catalan independence leaders as ‘political prisoners‘ was removed from the ARCO art fair.

The state-owned trade fair operator Ifema hosting ARCO subsequently apologised for what some had denounced as ‘censorship’.

Before that, he also made an artwork displaying Franco in a fridge.

But insulting the monarchy is an offence in Spain, where several sentences have stirred controversy over the years.

In March last year, the European Court of Human Rights (ECHR) criticised Spain for sentencing to jail two young Catalan independence activists who in 2007 burnt photos of former king Juan Carlos and his wife Sofia — although their sentence was later commuted to fines.

The jail sentence had interfered with “freedom of expression”, the court ruled.