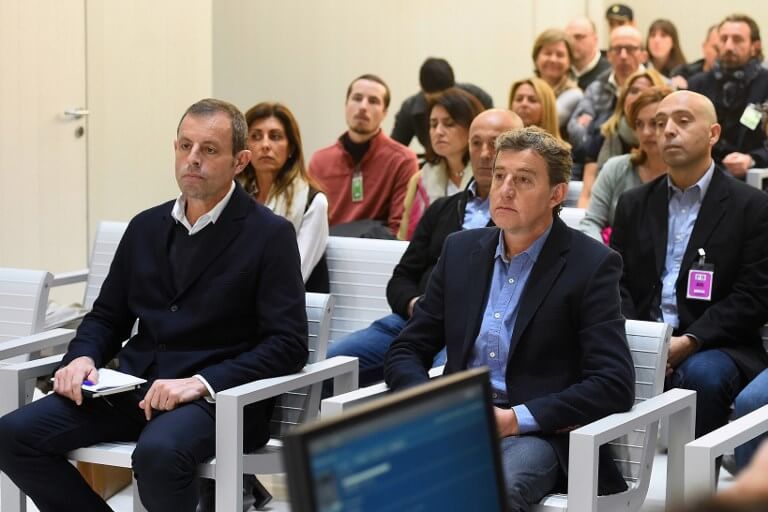 Former FC Barcelona president Sandro Rosell will be freed from jail today, where he has been since his arrest in May 2017, as his trial for alleged money laundering continues, Spain’s National Court has said.

Rosell, his wife and four others are accused of ‘large-scale money laundering’ of close to 20m euros since 2006 relating to television rights and sponsorship in Brazil.

The 54-year-old had been in pre-trial custody for more than 20 months and in the first hearing on Monday, his lawyers argued he should be released pending the rest of the proceedings.

‘The National Court agrees to the provisional release of Sandro Rosell and Joan Besoli,’ his alleged front man, the court said in a statement.

‘The two accused must return to prison at the end of today’s hearing where they will be released,’ it added.

Prosecutors at the Madrid-based court have called for the ex-Barça boss to be jailed for 11 years and to be fined 59m euros.

His release comes after Rosell, who was president of FC Barcelona from 2010-2014, was questioned in court on Tuesday.

He denied the prosecutors’ accusations, which he said were full of ‘mistakes and lies’.

The case centres on a deal signed by Ricardo Teixeira, the former head of the Brazilian Football Confederation, in 2006 with a company based in the Cayman Islands for the television rights to 24 Brazil friendly matches.

Rosell – who had previously lived and worked in Brazil, where he forged business links – and his wife allegedly received close to 15m euros in illegal commissions in their accounts as part of the deal.

Rosell is also suspected of having received some 5m euros illicitly as part of Nike‘s sponsorship deal with the Brazilian national team.

In his declaration, Rosell said ‘there were no commissions, legal or illegal’.

‘There was only payment to my company.’