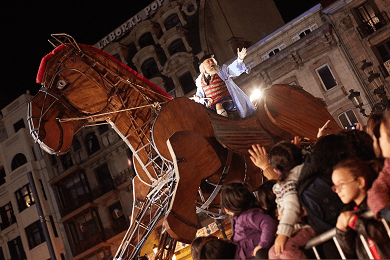 This weekend in Bilbao sees the return of El Olentzero, a legendary Christmas character and charcoal maker from the Basque Country.

According to local tradition, he visits houses in the region during the night of 24 December to leave presents for children, although in certain parts of the Basque Country he arrives a few days later.

On 23 December a large parade is held in the streets of Bilbao to welcome this generous gentleman back.

He arrives on a giant pottoka horse and with a sack full of gifts. Also appearing in the parade are other legendary Basque figures including Marí Domingi, who represents femininity, the arrival of winter and the start of a new year, the basajaun, lords of the forest, and galtzagorris, elves who help humans in their more cumbersome tasks.

On the morning of Christmas Eve, El Olentzero will be at the Teatro Arriaga where children can visit him in person.

The name of El Olentzero has been found in a range of variations but it’s thought to be derived from the words for ‘good’ and ‘times’ and is literally understood to mean ‘times of the good ones’.

The origins of the legends of both Marí Domingi and El Olentzero pre-date Christmas festivities and are thought to be connected to the celebration of the winter solstice. Nowadays, there are many stories and traditions associated with El Olentzero as well as songs about him.