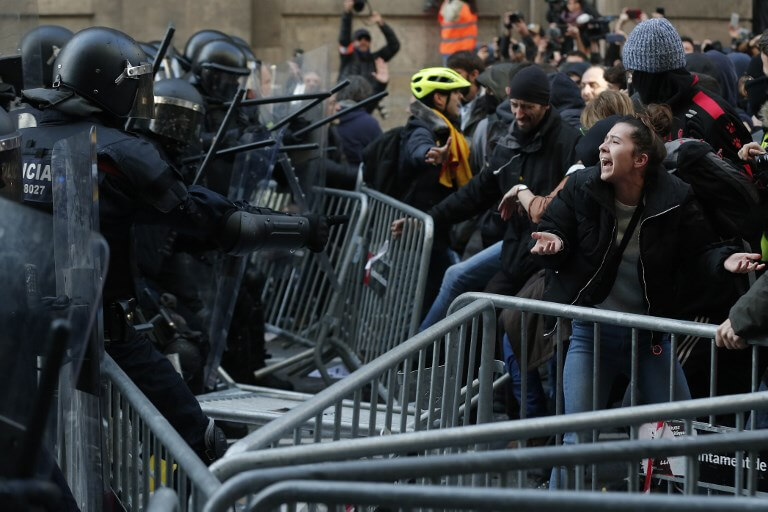 The Spanish government described its controversial cabinet meeting in Barcelona as a ‘show of affection’ towards Catalonia, despite major protests by pro-independence groups that brought tight security measures across the city.

‘It’s good that a cabinet meeting can take place in any part of Spain – and Barcelona is my city, said Meritxell Batet, the Spanish minister for public administrations. ‘This is compatible with protests and citizens’ freedom of expression.’

Pro-independence groups saw the meeting as a ‘provocation’ and called on supporters to take to the streets. Yet negotiations from both governments eventually served to cool tensions down.

Spain’s Prime Minister Pedro Sánchez held a meeting with Quim Torra, the Catalan president, on Thursday evening, in an effort to preserve the fragile alliance that allowed the former’s unexpected rise to power last spring.

Following the meeting, the two governments issued a joint statement expressing a commitment to an ‘effective dialogue’ to try to resolve the dispute over the wealthy region’s status within Spain.

The meeting was regarded as ‘very positive’ by the Spanish government spokesperson Isabel Celáa. ‘The government is always seeking spaces for dialogue – that’s the only recipe.’

Celáa took on opposition parties which accuse the government of being too lenient on pro-independence parties and want Madrid to trigger Article 155 of the constitution again to suspend Catalonia’s self-rule: ‘The perpetual application of Article 155 will not serve to find efficient solutions – only dialogue within the constitutional framework will allow us to solve the conflict.’

The Spanish cabinet meeting in Barcelona approved a €112 million funding plan for major highways and roads in Catalonia, which Madrid says will help boost economic growth.

Spanish ministers also approved a 22% raise of the minimum wage, which will be set at €900 per month, as well as a 2.25% salary increase which will benefit some two million public workers.

In a controversial decision, the Spanish government also decided to change the name of Barcelona-El Prat airport to Josep Tarradellas, Catalonia’s first president after the dictatorship of Francisco Franco.

The Catalan government claimed Madrid authorities didn’t consult them before changing the airport’s name, but minister Batet refuted the accusations.

The Spanish government also condemned the trial and execution of former Catalan President Lluís Companys and proclaimed ‘its recognition and the restitution of its dignity’. Companys, who was president during the Spanish Civil War (1936-39), was executed by firing squad on Montjuïc by the Franco regime on 15 October 1940, some 78 years ago.

This recognition by the Sánchez Cabinet is only a political declaration without legal value as, according to them, the Spanish Congress must first pass a law that officially invalidates Companys’ trial. Currently, there is a proposal waiting for approval at the chamber.

The Catalan government was aware of the stance on Companys adopted today by Madrid authorities, according to official sources.

The weekly cabinet meeting usually takes place in Madrid but the Spanish government decided to hold it in the Catalan capital as part of its efforts to reduce tensions.

It appeared to have the opposite effect in some of the streets of the capital. Protestors threw metal barriers and stones at officers and tried to breach a police barrier a few hundred metres from where the meeting was taking place.

Latest reports
Latest reports are that at least 11 people have been arrested and 46 have been injured, following the protests in Barcelona and across Catalonia.
Several parts of Barcelona city centre were in lockdown during Friday morning due to the cabinet meeting and the pro-independence protests. The Palau Llotja de Mar building, close to the Barcelona seafront, was the focal point for a large deployment of police officers.
Protesters did not make it to the venue due to the cordons deployed from 5:30am onwards, but demonstrations were active nearby. The Committees for the Defence of the Republic (CDRs) pro-independence group gathered in central places like Via Laietana and cut key roads, such as the Diagonal avenue and the Passeig de Gràcia boulevard.
A journalist was attacked while reporting a protest by the CDR. A masked man punched the reporter from the TV channel Intereconomia. The journalist defended that he was only ‘trying to do his job’.
As road cuts were announced earlier in the week, many people decided to steer clear of Barcelona on Friday morning, with 53% fewer vehicles than normal entering the city’s metro area between 6am and 8am.
previous post