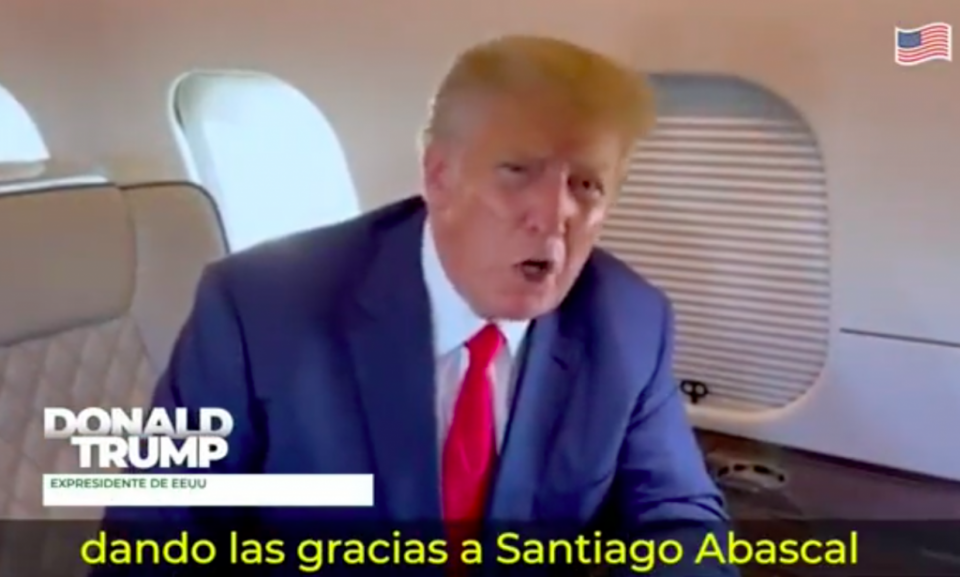 Former US President Donald Trump showed his support for Spain’s far-right Vox party on Sunday, in a video shown at a rally in Madrid that also featured messages by the leading stars of Europe’s populist right, such as Italy’s Giorgia Meloni and Hungary’s Viktor Orban.

In a recording that lasted barely 40 seconds while Trump was on a plane, the former president thanked Spain’s far-right Vox party and its leader Santiago Abascal for what he called the ‘great job’ they do.

‘We have to make sure that we protect our borders and do lots of very good conservative things,’ Trump said. ‘Spain is a great country and we want to keep it a great country. So congratulations to Vox for so many great messages you get out to the people of Spain and the people of the world.’

Vox became Spain’s third-largest party in the Spanish Congress after a 2019 election that led to the current national coalition of the PSOE socialists and left-wing Podemos parties.

Vox’s messages include zero tolerance for Catalan independence, disdain for gender equality, bitter criticism of unauthorised immigration from Africa, and embracing both the ‘Reconquista’ of medieval Spain from Islam as well as the legacy of Francisco Franco’s 20th-century dictatorship.

Abascal returned the flattery when he took to the stage at the outdoor venue after more video messages by European and South American right-wing politicians, as well as an in-person speech by Polish Prime Minister Mateusz Morawiecki.

‘My thanks for President Donald Trump, a visionary in the fight for sovereign nations, a visionary in the fight for secure borders, who has had to suffer [attacks] from the most powerful establishment in the world and the largest media attack that any world leader has had to face in recent memory,’ Abascal told the crowd of several thousand, many waving the Spanish flag.

Despite its spectacular rise, the party led by Abascal failed to meet the expectations it set for itself in regional contests this year, and recently suffered its first serious bout of in-fighting among its leaders. Vox is now eyeing regional and municipal elections next year as it battles to surpass Spain’s traditional right wing group, the People’s Party (PP).

The annual rally came just weeks after Abascal and the rest of Europe’s far-right celebrated the victory of Giorgia Meloni’s neo-fascist Brothers of Italy Party.

Cruz said he is looking forward to a landslide Republican win in the US congressional midterm election next month. Trump has been campaigning for right-wing candidates in the 8 November election and is pondering another presidential run for the 2024 vote.