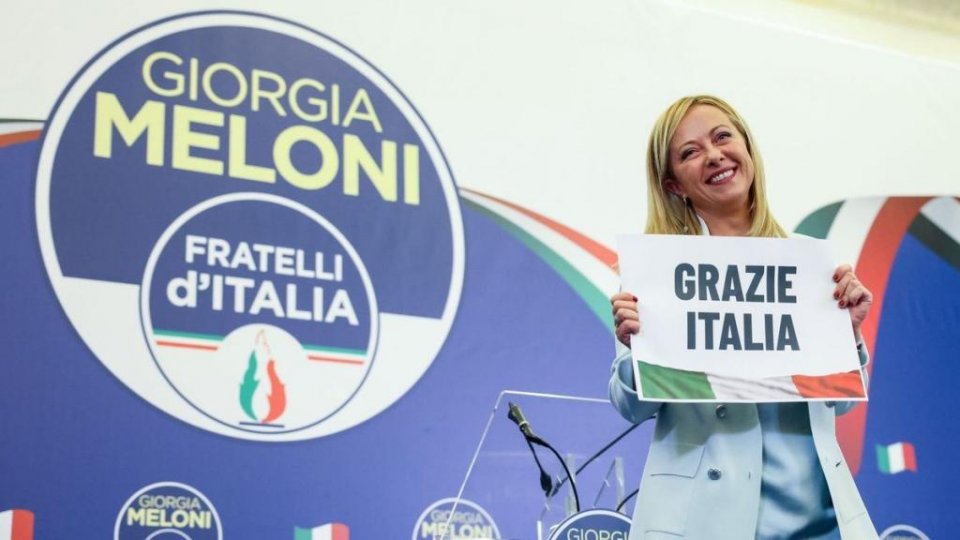 A party with neo-fascist roots, the Brothers of Italy, has won the most votes in Italy’s national elections, looking set to deliver the country’s first far-right-led government since World War Two and make its leader, Giorgia Meloni, Italy’s first woman premier, results showed on Monday.

Italy’s lurch to the far right has immediately shifted Europe’s geopolitics, placing a eurosceptic party in position to lead a founding member of the European Union and its third-largest economy. Right-wing leaders across Europe immediately hailed Meloni’s victory and her party’s meteoric rise as sending a historic message to Brussels, while Italy’s left warned of ‘dark days’ ahead and vowed to keep Italy in the heart of Europe.

Near-final results showed the centre-right coalition netting some 44% of the parliamentary vote, with Meloni’s Brothers of Italy snatching some 26%. Her coalition partners divided up the remainder, with the anti-immigrant League of Matteo Salvini winning 9% and the more moderate Forza Italia of ex-Premier Silvio Berlusconi taking around 8%.

In Spain, Socialist Prime Minister Pedro Sánchez, who announced that he tested positive with Covid-19 on Sunday, has not yet commented publicly on Meloni’s victory, but his Foreign Minister José Manuel Albares has taken a strong approach, stating that ‘populism always ends in catastrophe’.

‘It is a moment of uncertainty and in moments of uncertainty, populisms always acquire importance and always end in the same way: in catastrophe – because they offer simple short-term answers to problems which are very complex,’ he said in comments to the Spanish media.

When asked if the far-right’s victory in Italy could be ‘extrapolated’ to Spain, Albares ruled this out as a possibility. He acknowledged that the results were completely legitimate but said that Meloni’s governance model was closer to Putin’s than to the EU’s.

‘This [Meloni’s] is an authoritarian model that is contrary to the pillars of European construction, which is the basis of our prosperity,’ he said.

Alberto Núñez Feijóo, leader of Spain’s main opposition group, the People’s Party (PP), said that it was ‘not the result we were most in favour of’, whilst stating that Italian voters ‘had clearly manifested their position’ and that the new Italian government should ‘bring stability’ not only to Italy but to the whole of the EU.

Ione Belarra, head of the left-wing Podemos group that forms part of Spain’s governing coalition, said: ‘The victory of the Italian far right showcases the normalisation of hate speech and the lack of courageous policies that protect the social majority. Spain is not free from experiencing something like this. Now is the time to open up urgent and ambitious debates.’

Meanwhile, Santiago Abascal, leader of Spain’s third-largest political party, the far-right Vox, celebrated the Italian election results on Sunday night by Tweeting: ‘Tonight, millions of Europeans have their hopes pinned on Italy. Giorgia Meloni has shown the way forward for a Europe of proud, free and sovereign nations, capable of cooperating for the security and prosperity of all. Avanti Fratelli d’Italia.’

European Commission President Ursula von der Leyen warned against Italy’s potential rightward turn last week, saying that the EU would be ready to work with democratic governments, and had tools it could use should ‘things go in a difficult direction’, as in Hungary and Poland. This was a clear reference to the EU Commission’s ability to cut funds allocated to EU governments when they are deemed to be violating rule-of-law principles.

While the centre-right was the clear winner in Italy, the formation of a government is still weeks away and will involve consultations among party leaders and with President Sergio Mattarella. In the meantime, outgoing premier Mario Draghi remains in a caretaker role.

The elections, which took place some six months early after Draghi’s government collapsed, came at a crucial time for Europe as it faces Russia’s war in Ukraine and the related soaring energy costs that have hit ordinary Italian pocketbooks as well as industry.

Both Berlusconi and Salvini have ties to Russian President Vladimir Putin. While both have distanced themselves from his invasion, Salvini has warned that sanctions against Moscow are hurting Italian industry, and even Berlusconi has excused Putin’s invasion as foisted on him by pro-Moscow separatists in the Donbas.