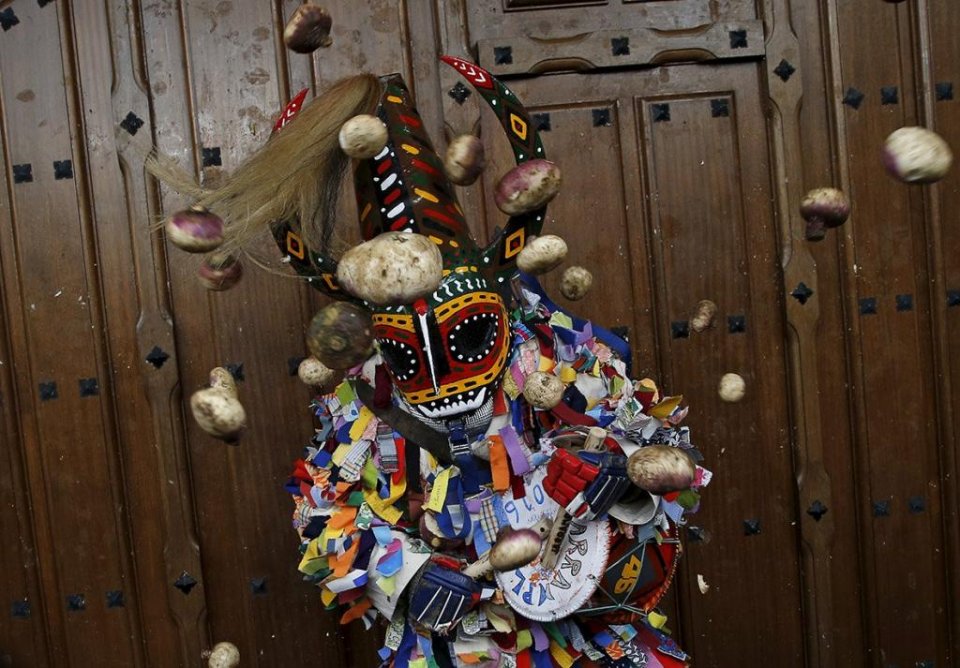 Today is a day you’ve dreamt of for years. It’s a cold winter morning. Your neighbours are outside waiting, armed with turnips. It’s time for you to go and suffer. When you step outside, they’ll launch their turnips at you with full force. But have no fear.

This is what you’ve always wanted. Your parents couldn’t be prouder. They’ll happily join in the merciless onslaught. It’s what any loving parent in the village would do: get in with the mob to chuck turnips at you from every angle.

It may seem strange to imagine, but this is how the chosen ones feel during the festival of Jarramplas. Being attacked by turnip-wielding villagers may be physically painful, but it’s not humiliating. In fact, in the village of Piornal, there is no greater honour.

The Jarramplas Festival takes places in Piornal, in the province of Cáceres (Extremadura) each year on 19-20 January [see video below].

The Jarramplas himself is a mythical monster dressed in a large jacket and trousers covered in hand-sewn multicoloured ribbons. Over his face and head, he wears a cone-shaped fibreglass mask with two devil-like horns.

The Jarramplas roams the streets of the village, playing his handheld snare drum. Local residents, and an increasing number of visitors, must chase him away by throwing turnips at him. In the past, other vegetables such as potatoes were used, but turnips are today’s weapon of choice.

As brutal as it is, the Jarramplas’ costume has protective padding beneath it to prevent any serious injuries. However, that doesn’t mean he has it easy. Apart from the constant pelting from an estimated 25,000 turnips in total, the costume itself weighs 45 to 50kg. Simply put, being the Jarramplas is exhausting.

The turnip-chucking residents, on the other hand, have it pretty good. When they’re not attacking their cone-headed victim, they spend the rest of the day singing traditional songs and enjoying local delicacies such as migas extremeñas, chorizo, cheese and wine.

Locals say the Jarramplas represents a cattle thief who was once chased away by the villagers. Even if that’s true, nobody knows when it happened, how it turned into a festival and why the culprit evolved into the multicoloured monster of today.

Even so, there are other theories about the festival’s origin. One is that it predates Christianity and represents the mythological story of Hercules slaying Cacus, a cattle thief and monster. Another is that comes from the indigenous tribes of South America á and was brought to Extremadura from returning explorers. Since all theories are yet to be proven, it remains a mystery.

Locals consider it an honour to be the Jarramplas. To even be considered, you would have to go on a waiting list that spans for over two decades. That’s why it’s common for parents to put their children on the list, in the hope that one day, when they’re fully grown, they’ll be lucky enough to be thrashed by thousands of turnips.

If you’d like to contribute something to our ‘Travel’, ‘Lifestyle’ or our ‘Opinion, Blogs & Spanish Experiences’ section, please email us: editorial@spainenglish.com. We’d love to hear from you.