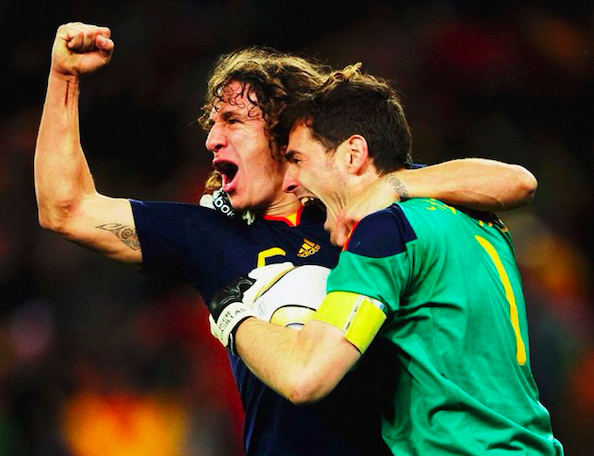 Spanish football legends Iker Casillas and Carles Puyol apologised to the LGBT+ community on social media on Sunday, after making ‘clumsy jokes’ about being gay.

Casillas and Puyol played on opposite sides of El Clasico for years as captains of Real Madrid and FC Barcelona respectively, but the two also enjoyed a friendship as regulars in the Spanish national team. Casillas retired from football in 2020 while Puyol called time on his career in 2014.

The personal life of Casillas has been heavily covered in Spain since his retirement, much to his annoyance, and it appears this was the reason behind his tweet, despite initially claiming that he had been hacked.

The original tweet was live for more than an hour before being deleted. He later tweeted: ‘Hacked account. Luckily everything in order. Apologies to all my followers. Of course, more apologies to the LGBT community.’

Puyol, meanwhile, did not claim his account was hacked, but instead apologised for ‘a clumsy joke with no bad intentions but was totally out of place.’ He added: ‘I understand that it may have hurt sensitivities. All my respect and support for the LGTBIQA+ community.’

Casillas has 9.7 million followers on Twitter; Puyol has 12.3 million.

According to Spanish publication AS, the post from Casillas was meant as a sarcastic joke, aimed directly at the Spanish media for its incessant coverage of his personal life following his separation from his wife Sara Carbonero in 2021.

‘After the repercussion generated by these rumours, Casillas has reacted publicly with a striking message that has caught many of his followers by surprise and it is not about any kind of hacking,’ wrote AS. ‘The former Real Madrid goalkeeper has sarcastically posted on Twitter with the aim that the media stop leaking false information about his courtships, which have grown since his sentimental break-up with Sara Carbonero.’

However, the tweets from Casillas and Puyol were met with widespread criticism. Among those to register their condemnation was openly gay footballer Josh Cavallo, an Australian who plays for A-League club Adelaide United.

Cavallo’s post was shared by Jake Daniels, the Blackpool forward who in May became the first current player in the UK to come out as gay since Justin Fashanu in 1990.

Openly gay players remain rare in men’s football, although some progress has been made in recent years. In 2012, the former Germany and Aston Villa midfielder Thomas Hitzlsperger came out shortly after calling time on his playing career. The following year, the former Leeds midfielder Robbie Rogers did the same, eventually reversing his retirement to play for LA Galaxy in MLS.

@IkerCasillas and @Carles5puyol joking and making fun out of coming out in football is disappointing. It’s a difficult journey that any LGBTQ+ ppl have to go through. To see my role models and legends of the game make fun out of coming out and my community is beyond disrespectful pic.twitter.com/Yp88aQyyTV