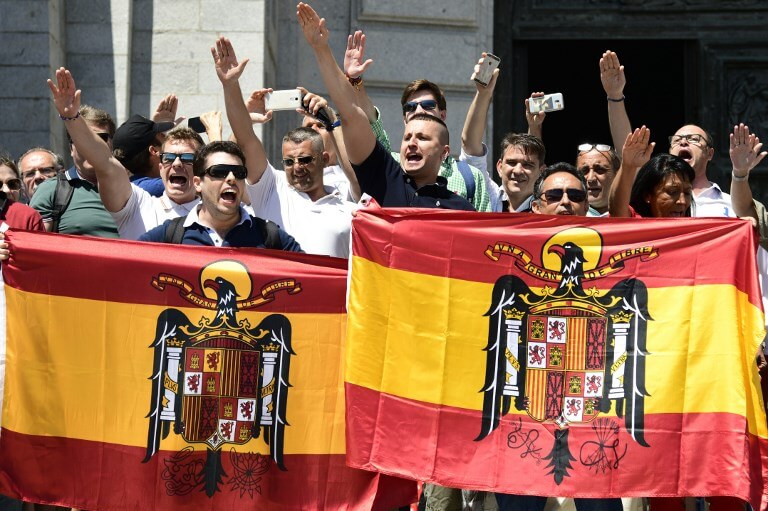 Spain’s Senate house has approved a landmark bill that will ban expressions of support for the former dictator Francisco Franco, and seek to bring ‘justice’ to the victims of the 1936-1939 Civil War and the ensuing dictatorship.

Organisations that praise or support the policies and leaders of Spain’s 20th-century dictatorship, including the private Francisco Franco Foundation, will now be banned under the legislation. Fines for non-compliance will range from 200 to 150,000 euros.

The new law does not allow for crimes under the dictatorship to be prosecuted, however.

The bill was approved by 128 lawmakers in the Senate on Wednesday, with 113 votes against and 18 abstentions.

Honouring those who died or suffered violence or repression during the war and decades of dictatorship that followed has been a top priority for the left-wing government of Prime Minister Pedro Sánchez since he came to power in 2018.

‘Today we are taking another step towards justice, reparation and dignity for all victims,’ tweeted Sánchez after the vote.

But the new law also threatens to fuel tensions in a nation where public opinion is still divided over the legacy of the dictatorship that ended with Franco’s death in 1975.

The right-wing opposition People’s Party (PP) has vowed to overturn the law if elected in the next election, which is due by the end of 2023.

‘History cannot be built on the basis of forgetting and silencing the vanquished’ of the civil war, reads the preamble to the law.

Franco assumed power after the civil war in which his Nationalists defeated Republicans, leaving the country in ruins and mourning hundreds of thousands of dead.

While his regime honoured its own dead, it left its opponents buried in unmarked graves across the country.

The bill also calls for a national DNA bank to be established to help identify remains and for the creation of a map of all mass graves in the country.

‘The state must exhume the remains of the victims of the Franco dictatorship,’ Sánchez told parliament in July.

‘There are still 114,000 people who were forcibly disappeared in Spain, mostly Republicans,’ he said, referring to people whose fate was deliberately hidden.

Only Cambodia, he said, had more ‘disappeared’ people than Spain, its population suffering atrocities under the 1975-1979 Khmer Rouge regime.

Up until now, it has been associations who have led the search for those who went missing during the Franco era, as portrayed in Spanish director Pedro Almodóvar’s most recent film ‘Parallel Mothers’.

The new legislation seeks to build on a 2007 ‘historical memory’ law, which experts and activists say fell short of excavating the hundreds of still untouched mass graves scattered across Spain.

Sánchez’s predecessor, Mariano Rajoy of the PP, famously bragged that he had not spent a euro of public money in furthering the provisions within the law.

The new law will also annul the criminal convictions of opponents of the Franco regime and appoint a prosecutor to probe human rights abuses during the war and the ensuing dictatorship.

Previous attempts to bring Franco-era officials to justice in Spain have been blocked by an amnesty agreement signed by political leaders after his death.

The deal was seen as essential to avoid a spiral of score-settling as officials sought to unite the country and steer it towards democracy.

And the law will also mean that for the first time, ‘stolen babies’ will be recognised as victims of Francoism.

Those babies were newborns who were taken away from ‘unsuitable’ mothers — Republican or left-wing opponents of the regime, at the time unwed mothers or poor families.

The new bill creates a State Prosecutors’ Office for Human Rights and Democratic Memory that guarantees the right to investigate the human rights violations during the war and dictatorship.

But not everyone was pleased with the outcome of the vote, with the Association for the Recovery of Historical Memory (ARMH) saying the new legislation did not go far enough.

The law ‘perpetuates impunity for the Francoists’ because it leaves the amnesty agreement in force, ‘it will not put anyone on trial’ nor will it ‘compensate the families of the disappeared’, it said in a statement.

The PP has accused the government of needlessly opening the wounds of the past with the law.

This is Sánchez’s second major effort to tackle the Franco legacy. In 2019, he had Franco’s remains removed from a vast grandiose mausoleum near Madrid and transferred to a discreet family plot, despite opposition from the late dictator’s relatives and right-wing parties.