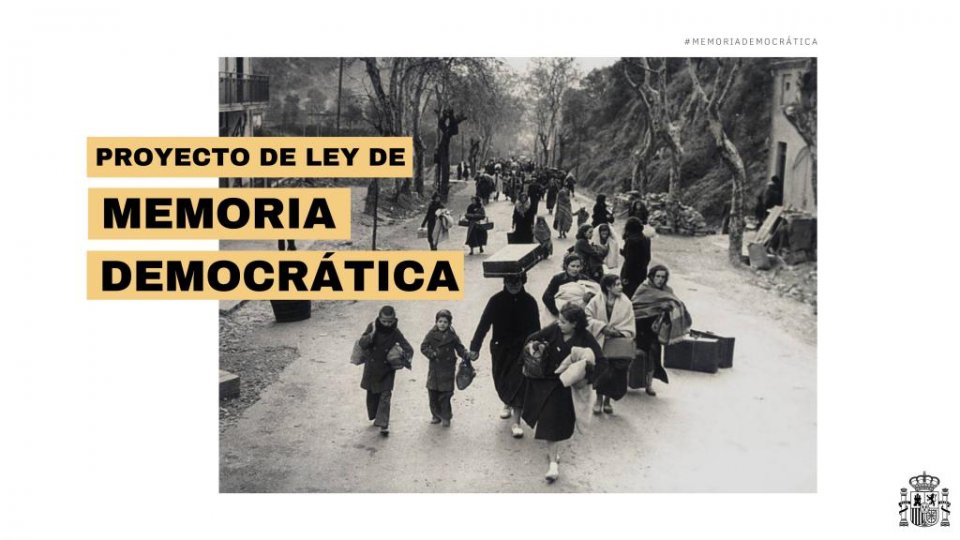 The Spanish government has approved a new ‘Democratic Memory’ bill to tackle the legacy of Franco’s 1939-1975 dictatorship and the Spanish Civil War that preceded it, with various measures to honour those who suffered persecution or violence.

The ‘Law on Democratic Memory’ will now go to the Spanish Congress for a vote, and is likely to re-ignite a debate over freedom of expression and how the Franco regime is seen — an issue that still provokes strong emotions among many Spaniards.

14 years after Spain passed its first ‘Historic Memory’ law (2007), the government now aims to eliminate loopholes and cover a wider range of victims and crimes related to Francoism. It will also actively promote the search and exhumations of victims buried in mass graves. Under the 2007 law, the state only provided assistance to help families track relatives buried in unmarked graves.

With the new law, Spain’s left-wing PSOE–Podemos coalition government wants to outlaw expressions of support for Franco’s dictatorship, or anyone who ‘extols (Franco’s) coup and the dictatorship or extols its leaders, denigrating and demeaning the dignity of the victims of the coup, of the Civil War or of Franco’s rule.’ If passed into law, the bill will create two official remembrance days to honour the victims and the exiled, and an official registry of the victims will be set up.

More than 500,000 people died in the war between rebel nationalist forces led by Franco and defenders of a short-lived Spanish Republic. Franco then declared victory on 1 April 1939 and ruled ruthlessly until his death in 1975. Government estimates point to 114,000 civilians who disappeared, presumably killed, throughout the dictatorship. Campaign groups say more than 100,000 bodies are still in unmarked mass graves across Spain. Amnesty International has previously stated that only Cambodia has more mass graves.

The ‘Democratic Memory Law’ will make the state responsible for finding and identifying the bodies, rather than leaving the task to relatives. The bill will ensure public funding to search for missing persons, map mass graves, and create a DNA database to help identify the bodies.

With Franco’s death in 1975 and the return of democracy, Spain’s left and right-wing parties originally agreed on a Pacto del Olvido (Pact of Forgetting) to avoid confronting a painful past and to ease the transition.

But Franco’s legacy has remained a very divisive issue in Spain, and even more so since the rise of the far-right Vox party in the past few years, currently the third largest party in the country.

‘With this law … we become a more decent country because we serve better the victims,’ the minister in charge of the bill, Félix Bolaños, told reporters on Tuesday. ‘We want the thousands of families who are still searching for the remains of their loved ones to know that they can count on the government in that mission’ of giving them a dignified burial or simply establishing what happened, he added.

If passed, the bill will declare null and void the convictions and penalties handed down by Francoist repressive bodies over people’s political and other beliefs, or sexual orientation. It will also redefine the grandiose Franco-era monument known as The Valley of the Fallen, following the exhumation of the body of Franco on 24 October 2019, as a cemetery to hold the remains of people killed on both sides of the civil war.

It states no one can be buried in a place of prominence in the complex, meaning the remains of the fascist Falange party’s founder, José Antonio Primo de Rivera, will also have to be removed.

Since taking power in 2018, Prime Minister Pedro Sánchez has made several moves to address Franco’s legacy, including the exhumation of Franco in October 2019.

‘Today, Spain has settled a historic debt with its past. We have approved the Democratic Memory bill with which we advance towards acknowledging the victims of Civil War and dictatorship,’ Sánchez tweeted, after his cabinet approved the new draft bill this week. ‘It is a necessary law that enables us to be a better country. For truth, justice, reparation and memory.’