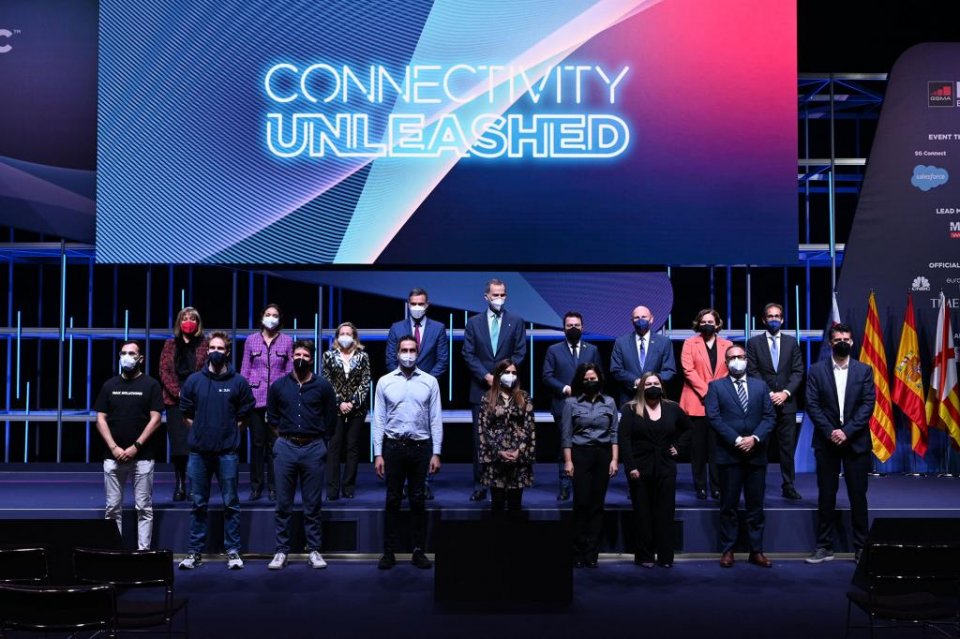 Spanish Prime Minister Pedro Sánchez opened the Mobile World Congress (MWC) in Barcelona on Monday by saying it ‘reaffirmed everything that unites us’.

Speaking at an event on Sunday evening to welcome attendees to one of the technology industry’s biggest annual events, Sánchez said, ‘We open this Mobile World Congress at a dramatic time for Europe … with a historic modernisation process ahead of us’, and which he said was key to achieving a ‘peaceful future’, with this MWC ‘reaffirming everything that unites us’.

The event, featuring more than 1,000 speakers, 1,500 exhibitors and expected to attract more than 40,000 guests, runs from 28 February until 3 March, yet is taking place under the shadow of the Russian invasion of Ukraine.

Organisers are staging a full-scale event again, after two years of disruption caused by the Coronavirus pandemic. However, the Russian invasion of Ukraine has hindered preparations for this year’s edition, with organisers forced to remove the country’s dedicated pavilion.

Industry body GSMA, which stages the annual event, said in a statement on Friday that it was complying with all sanctions and policies regarding Russia. It confirmed, however, that Russian firms would still be able to participate. Also read: No Russian pavilion at Mobile World Congress in Barcelona, opening Monday

The MWC was cancelled at the last minute in 2020 as the pandemic spread from China to Europe, and last year’s edition was drastically scaled down. The pandemic continues to cast its shadow with big names like Sony, Asus and Lenovo pulling out or participating ‘virtually’.

Focuses of this year’s event include the rise of 5G, the opportunities offered by the Internet of Things (IoT), the metaverse and the impact of tech on the environment.

Few new products are expected to be unveiled by the major players, many of whom have showcased their latest releases in the weeks leading up to the get-together.

Celebrating that the MWC is ‘the best sign of the return to normality’ after the pandemic, Pedro Sánchez praised the digital sector ‘for rising to the occasion’, and thanked all the companies for their efforts to ‘allow citizens to continue working, learning, enjoying entertainment and culture, and communicating with family and friends’ during the pandemic.

He also emphasised that digitalisation is one of the cornerstones of Spain’s Recovery, Transformation and Resilience Plan and would be attracting almost a third of total investment, some 20 billion euros. Along with the guarantee of 100 megabit broadband for 100% of citizens and the roll-out of 5G, the Spanish government has promised investments in areas where Spain ‘will play a leading role’ such as artificial intelligence, cybersecurity, industry 4.0 and the data economy. Also read: Sánchez: ‘Economic Recovery Plan most ambitious in Spain’s recent history’.

Sánchez also used the inauguration dinner event to stress ‘the critical moment that Europe is going through, where its security is threatened’, and where ‘the European Union and its allies must respond as we are doing, with unity and determination, to the threat that Putin represents to Europe’s security’.

He said that Europe and its allies had sent a strong message with massive economic sanctions and warned that ‘the sanctions will last until Putin leaves Ukraine, all of Ukraine’.

Given the invasion of Ukraine, Sánchez pointed out that ‘we are responding to President Putin with total forcefulness and also with humanitarian aid, while also keeping such important dates as MWC because of the commitment it represents and also because of the values that inspire it’.

The ceremony, presided over by Felipe VI, was also attended by the Economy Minister Nadia Calviño, and the Minister for Industry, Trade and Tourism, Reyes Maroto.