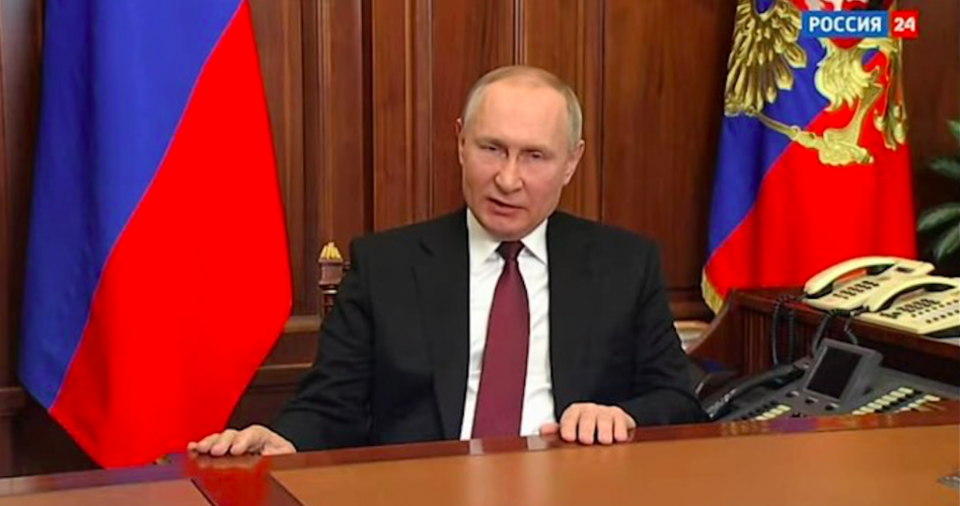 Russia launched a wide-ranging attack on Ukraine on Thursday, hitting cities and bases with airstrikes or shelling, as civilians piled into trains and cars to flee. Ukraine’s government said Russian tanks and troops rolled across the border in a ‘full-scale war’ that could rewrite the geopolitical order and whose fallout already reverberated around the world.

In unleashing Moscow’s most aggressive action since the Soviet invasion of Afghanistan in 1979, President Vladimir Putin deflected global condemnation and cascading new sanctions — and chillingly referred to his country’s nuclear arsenal. He threatened any foreign country attempting to interfere with ‘consequences you have never seen’.

In a reminder of Russia’s nuclear power, Putin warned that ‘no one should have any doubts that a direct attack on our country will lead to the destruction and horrible consequences for any potential aggressor’.

‘To anyone who would consider interfering from the outside,’ said Putin, ‘if you do, you will face consequences greater than any you have faced in history. All relevant decisions have been taken. I hope you hear me.’

The attack began even as the UN Security Council was meeting to hold off an invasion. Members still unaware of Putin’s announcement of the operation appealed to him to stand down. UN Secretary-General Antonio Guterres opened the emergency meeting, telling Putin: ‘Give peace a chance.’

But hours later, NATO’s Jens Stoltenberg indicated it was too late: ‘Peace on our continent has been shattered.’

Condemnation rained down not only from the US and Europe, but from South Korea, Australia and beyond — and many governments readied new sanctions.

Spanish Prime Minister Pedro Sánchez condemned Russia’s aggression against Ukraine, calling it an ‘intolerable military invasion’, and said that his government stands in solidarity with the Ukrainian government and its people.

Sánchez said he is in contact with EU and NATO partners and allies to ‘coordinate a response to the serious situation’. He called the actions of the Russian army ‘a completely unjustified aggression, of unprecedented gravity, and a flagrant violation of international law that puts global security and stability at risk’.

‘We demand the immediate cessation of hostilities before the number of victims multiplies, as well as the return of troops to the internationally recognized territory of the Russian Federation,’ a Spanish government statement read.

‘In these difficult hours, we also want to reiterate our support for the territorial integrity and sovereignty of Ukraine, as well as show our full support and solidarity with the Ukrainian people,’ the government said.

Sánchez said he is coordinating with European Union partners and NATO allies for a response ‘adapted to the seriousness of the Russian Federation’s illegal action’.

The Spanish prime minister will also attend the extraordinary European Council called urgently to establish the EU’s response to the Russian aggression.

Reporting an “incidence rate” by stating a number has little meaning for most people who haven’t been keeping a running record of this statistic. I suggest you add a sentence or two to give a feel for how this number compares with previous numbers and with other countries’ like statistic.