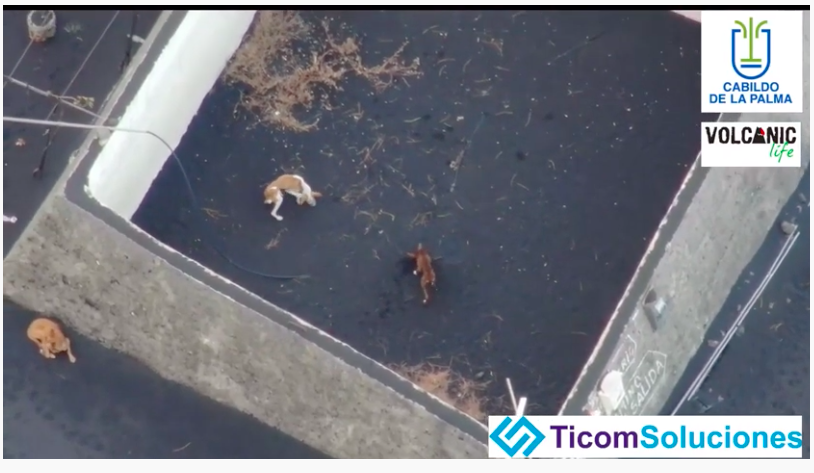 The Spanish drone company from Galicia, Aerocámaras, that had been attempting to airlift four to six hunting dogs stranded for weeks between rivers of red-hot lava streaming from the erupting volcano on the island of La Palma in the Canary Islands, has detected human tracks in the area and was preparing to abandon the project on Thursday. It also tweeted that there was no longer any trace of the dogs, believed to have already been rescued.

It has been reported that a mysterious group calling itself the ‘A Team’ was claiming responsibility for rescuing the dogs. The owners of the dogs have not come forward, and there is an exclusion zone established by the island’s authorities in the areas affected by the volcano, including where the dogs were trapped.

The emaciated dogs had been stranded in two empty water tanks in the town of Todoque, flanked by slow moving lava flows from the Cumbre Vieja volcano that erupted on 19 September. Until Wednesday, the trapped dogs had been supplied with food and water using smaller drones belonging to local companies, Ticom Soluciones and Volcanic Life [see video below].

Aerocámaras is licensed to use larger drones for assistance in emergency operations, and was trying to carry the animals to safety in a move that has not been attempted to date. A wave of support had helped the company transport 100kg of heavy equipment from the Galicia region to La Palma.

Aerocámaras CEO Jaime Pereira said that the rescue attempt would be complicated, and explained that the company had had to quickly develop a new system to bear the weight of the dogs. Flying conditions with the area surrounded by hot lava, ash and smoke, were also complex.

The molten rock has so far covered over 1,885 acres of land and destroyed around 2,000 buildings, although prompt evacuations have helped avoid fatalities on the island.

On its way to the sea, the lava has spared a few areas by creating ‘islands’ of land that remain relatively unharmed, such as the spot where the dogs were last seen.