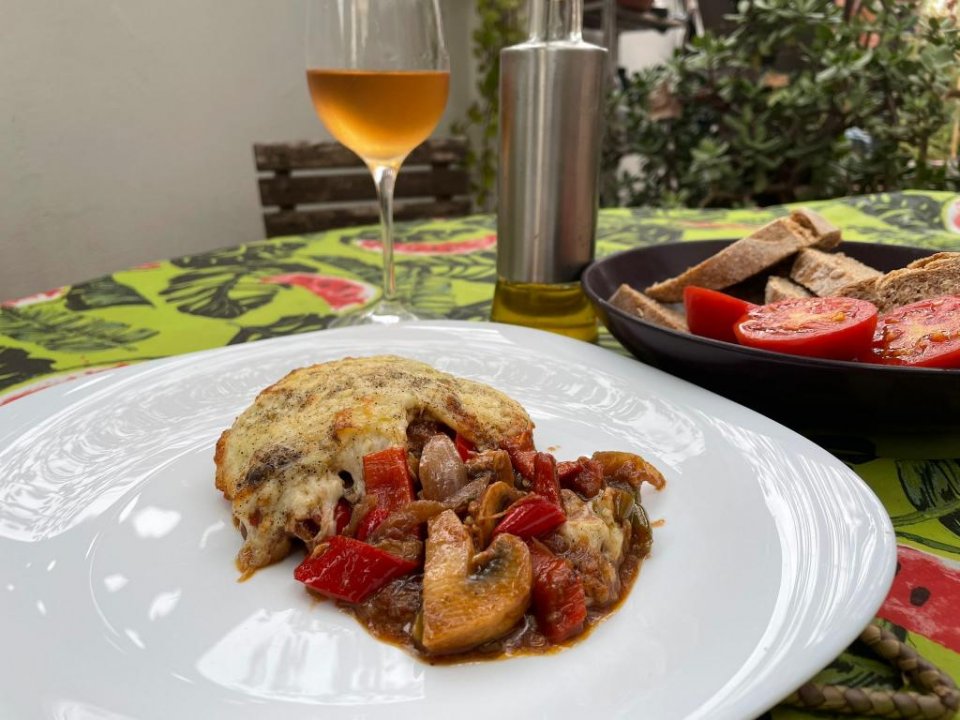 It was only when I started growing peppers myself that I realised that there was no such thing as green pepper plants and red pepper plants! All green peppers turn into red peppers if you leave them long enough (the man I was buying the baby pepper plants from actually laughed out loud at me when I asked him).

Now, this is a bit of a problem in our household, where my husband eats kilos of green peppers every week and is not that fond of red peppers, whereas I love the crunchy sweetness of a red pepper. I virtually have to stand guard over them to stop him picking them all while they’re still green. Green peppers have a slightly bitter and more savoury taste, while red peppers are sweeter. I think he’s convinced it’s a male/female thing.

There are many different types of peppers and they’re all part of the Capsicum family, including the tiny little chilli ones. Originally, they only grew in Latin America (as early as 7000BC) and the early Spanish and Portuguese travellers brought them back and introduced them to the rest of the world, where they took off like peppery wildfire. Peppers really are the most truly international of vegetables. I can’t think of a single cuisine that doesn’t use them. The largest pepper producer in the world is China, followed by Mexico, then Indonesia. The majority of the peppers we buy here are Bell peppers.

Peppers are loaded with essential vitamins and minerals, they’re low in calories and totally cholesterol free. They’re good for your eye health, rich in antioxidants and can help prevent anaemia, as they have a good level of iron and they’re high in vitamin C which helps the body absorb iron. Really, they’re a super vegetable! Red, green, orange, even purple, they’re delicious raw, roasted or stir-fried and right now, in the markets they’re very, very reasonably priced. This recipe calls for tomatoes too, which are also at the peak of their season at the moment and of which, coincidentally, I also have a garden full.

The idea behind this recipe was to use the veggies I have in my garden in a different way. Everyone stuffs peppers, so I thought we would do a kind of ‘de-constructed’ stuffed pepper, with all the flavour and none of the fuss. Basically, a summer casserole!

In a large pan (I always use a wok), sauté the onions and peppers in a good glug of olive oil. Do this on quite a low heat because you want the peppers to soften but not burn, you can’t really overcook them at this stage. Add the mushrooms and garlic and cook until it all smells wonderful and the mushrooms have reduced a little but not too much. Mix in all the spices and a pinch of salt and some freshly ground pepper to taste. (Ask anyone, I’m an addict!)

Now add the diced tomatoes and simmer the mixture for about 10 minutes. It should not be too tomatoey. The dominant look should be of peppers and mushrooms.

Tip the mixture into a casserole dish and cover with the grated mozzarella and cheddar. Do combine the cheeses. Do NOT be tempted to just use one. The mozzarella gives it that glorious stringiness and the cheddar the sharp cheese flavour, they really work so well together.

Bake for about 15 minutes at about 180C, or until the cheese is bubbling away merrily.

When you pull the casserole out, leave it to rest for a few minutes, so it’s not too runny when you serve it.

The great thing about this dish is that although it’s perfectly seasonal now, and you don’t want it to be too heavy, it’s very adaptable. So, you could make it into a more filling meal by adding a jar of lentils, or white beans when you add the tomatoes. I served it with a crunchy salad and some pan con tomate, but you could serve a side dish of rice or a potato salad if you had really hungry mouths to feed!

Oh, and a REALLY cold bottle of rosado. Bon profit!

ALSO READ: The Seasonal Chef (1) – Frittering Away the Weekend

Lisa Girling is the owner and director of TEFL International Barcelona where she trains teachers of English. She loves growing, cooking and eating food and lives in Sant Pere de Ribes, Catalonia, with her husband and two cats.

If you’d like to contribute to our site, please email us: editorial@spainenglish.com. We’d love to hear from you.

Over 2,500 evacuated as Spain deploys military against wildfire in Andalusia