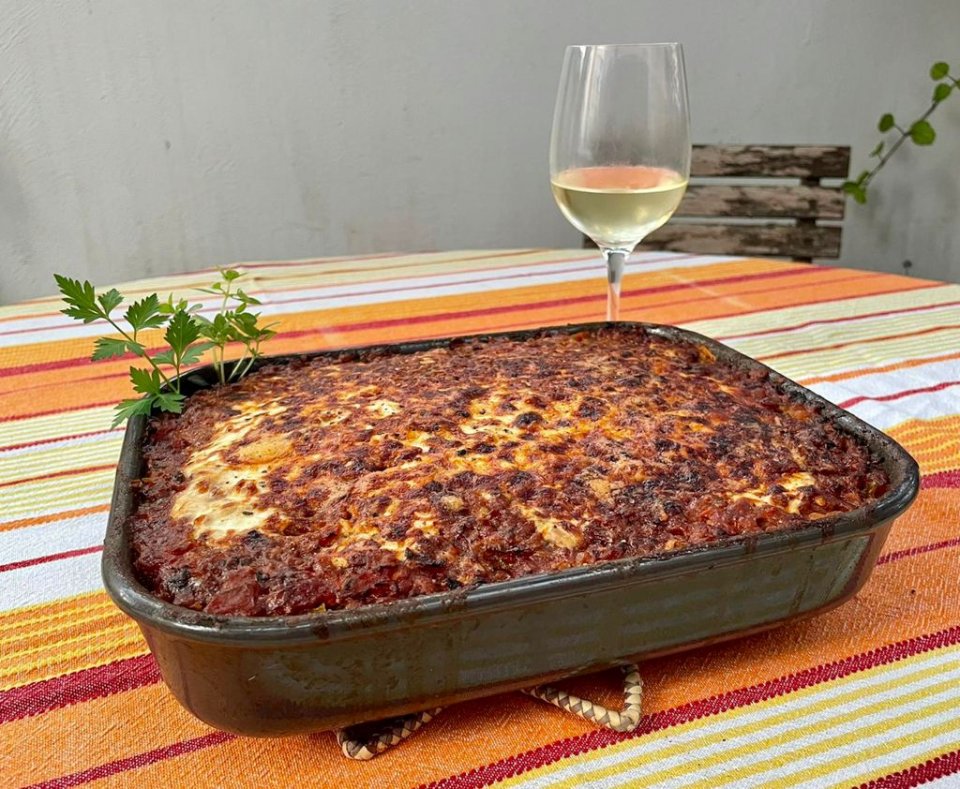 Aubergine or eggplant? One of the many debates I have with my American friends about the names of things and one I find particularly funny. I mean really, have you ever seen anything that looks less like an egg than a great big purple aubergine? So, before I wrote this, I did some research, and it turns out that it is not quite as ludicrous as it might seem. You see, the original aubergines were smaller and rotund (egg-shaped even!) and off-white coloured, hence the name: egg plant!

So why on earth do we insist on calling them aubergines? Well, the word has come from the Dravidian languages, via Arabic. The Hobson dictionary comments: ‘probably there is no word of the kind which has undergone such extraordinary variety of modifications, whilst retaining the same meaning, as aubergine’ So, there you have it!

Whatever you call them, aubergines are an amazing culinary resource. For non-meat-eaters they are invaluable. On their own, some people think they have little flavour (I don’t agree), but they have an amazing ability to soak up spice and sauce. They reward long, careful cooking with delicious, flavour-filled results.

The season for aubergines is from the end of May until October, so right now the markets are full of the firm, shiny, purple vegetables! I paid 90 cents a kilo! Did you know that, botanically speaking, the aubergine is, in fact, a berry? No, neither did I until I looked it up! It belongs to the nightshade family, but don’t worry, they’re not poisonous (although it probably isn’t a very good idea to eat them raw.) Tomatoes and potatoes are also nightshades.

When I first started cooking with aubergines, I remember I used to have to salt them carefully before I cooked them to draw out the bitterness. It was a pain, it used to take ages, but something has changed: aubergines are no longer bitter! I guess they’ve had it gradually bred out of them but, however it’s been done, it’s a huge improvement. The thing to remember when cooking with aubergines is that an undercooked aubergine is really, really nasty. You cannot cook aubergine in a hurry. If you’re trying to cook a quick dinner, cook something else! I am not a fan of microwaves. I only really use mine for heating up cups of tea and coffee which I’ve allowed to go cold and left around the place. But when cooking with aubergine a great tip is to first blast them in the microwave for a while – it really does speed things up.

Thinly slice the aubergines and put them in a plastic bowl. Microwave them on full power for about 10 minutes and then stir them and blast them for another five. They should be starting to go soft but still maintaining their shape.

Dice the onion and fry in a little olive oil with the garlic and celery. When soft, add the diced tomato. You can use a tin of tomatoes, but tomatoes are so cheap in the market at the moment that it really is worth using fresh ones – they’re so sweet and flavoursome. Add a good splash of Worcester sauce (I’m from Worcestershire and I simply can’t cook without it!), two cinnamon sticks, a bay leaf and a good dose of freshly ground nutmeg according to your taste. Add the diced chilli and sweet red pepper, then put the lid on and simmer for a while until the tomato starts to get jammy. Add the lentils and the chopped parsley and cook a while longer, but don’t let the sauce get too thick.

Put a thin layer of the sauce in the bottom of a 25cm x 30cm oven dish, then a layer of overlapping aubergine slices, then another level of the sauce, then a drizzle of the homemade yoghurt and some grated cheese on top of that. Then repeat the process: aubergine, sauce, yoghurt and finally cheese and a really good amount of ground black pepper.

You could do three layers if you have enough sauce and aubergine.

Cook the dish at 180 degrees for at least 60 mins in the middle of the oven. Check it doesn’t burn and turn it down, if necessary. I generally try to give it 90 mins; it only improves with cooking. A knife should go through it with no resistance when it is cooked. Leave it to rest for 10 minutes when it comes out of the oven before you serve it.

It’s even better the next day … if there’s any left!

ALSO READ: The Seasonal Chef (1) – Frittering Away the Weekend

Lisa Girling is the owner and director of TEFL International Barcelona where she trains teachers of English. She loves growing, cooking and eating food and lives in Sant Pere de Ribes, Catalonia, with her husband and two cats.

If you’d like to contribute to our site, please email us: editorial@spainenglish.com. We’d love to hear from you.