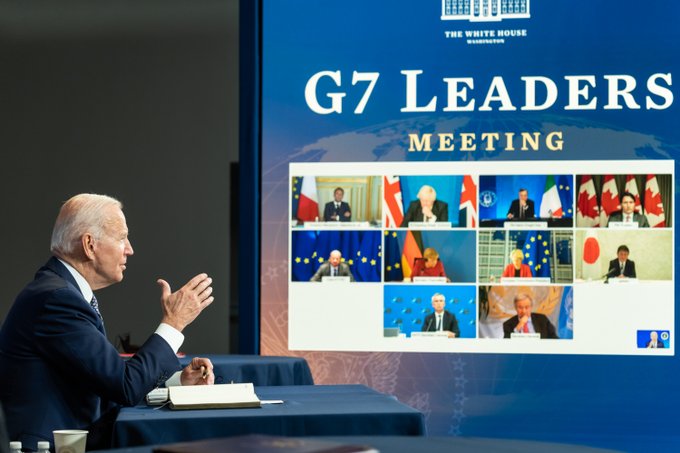 US President Joe Biden has rejected pleas from international allies to keep US troops in Afghanistan for evacuation efforts beyond 31 August, citing the growing threat of a terrorist attack near Kabul airport.

His insistence to keep to the end of month deadline came during virtual talks on Tuesday with leaders of the G7 – Britain, Canada, France, Germany, Italy, Japan and the US. In a move likely to fuel criticism that America is abandoning Afghan partners to the Taliban, Biden made it clear that he is resolved to withdraw what are now 5,800 American troops from Kabul airport by next Tuesday’s deadline.

‘We are currently on a pace to finish by 31 August,’ Biden said at the White House on Tuesday. ‘The sooner we can finish, the better. Each day of operations brings added risk to our troops.’

The president also acknowledged that completing the airlift by 31 August depended on the Taliban continuing to cooperate and allowing access to the airport with no disruption to operations. He said that he had asked the Pentagon and the State Department for ‘contingency plans to adjust the timetable should that become necessary’ – but he was adamant that 31 August would be the deadline.

‘I’m determined to ensure that we complete our mission, this mission. I’m also mindful of the increasing risks that I’ve been briefed on and the need to factor those risks in,’ said Biden.

The ‘acute and growing’ risks included possible terrorist attacks by Isis-K, the Islamic State group’s Afghanistan affiliate that is also a sworn enemy of the Taliban, the US president said. ‘Every day we’re on the ground is another day we know that Isis-K is seeking to target the airport and attack both US forces and allied forces and innocent civilians.’

Biden said that 70,700 people have been evacuated from Kabul since 14 August. But his reluctance to extend the 31 August deadline disappointed politicians in the US and leaders abroad who believe that it is unrealistic.

British Prime Minister Boris Johnson said after the meeting: ‘We will go on right up until the last moment that we can. But you have heard what the president of the United States has had to say, you have heard what the Taliban have said. I think you have got to understand the context in which we’re doing this. We’re confident we can get thousands more out. But the situation at the airport is not getting any better, there are public order issues, it’s harrowing scenes for those who are trying to get out, and it’s tough for our military as well.’

Charles Michel, the president of the European Council, said: ‘Several leaders during the G7 meeting expressed concerns about this timing, 31 August, and we have also had the opportunity to express our opinion on that.’

Going forward, the G7 leaders said they would ‘judge the Afghan parties by their actions, not words’, echoing previous warnings to the Taliban not to revert to the strict Islamic form of government that they ran when they last held power from 1996 until the US-led invasion that ousted them in 2001.

‘In particular, we reaffirm that the Taliban will be held accountable for their actions on preventing terrorism, on human rights in particular those of women, girls and minorities and on pursuing an inclusive political settlement in Afghanistan,’ the G7 leaders said in a statement. ‘The legitimacy of any future government depends on the approach it now takes to uphold its international obligations and commitments to ensure a stable Afghanistan.’ The full statement from the G7 leaders can be found by clicking here.

A 2020 deal struck by then US president Donald Trump and the Taliban initially set a May deadline for US troops to be fully withdrawn, after nearly 20 years of war there. Biden extended the deadline to 31 August, including from Kabul airport, but failed to anticipate how quickly the Afghan government and army would collapse.

There are fears for Afghan civilians who, if left behind, face reprisals from the Taliban for working with western forces, missions and non-government organisations.

On Tuesday, Spain’s Defence Minister Margarita Robles admitted that it would not be possible to evacuate all Afghan refugees who served Spanish missions in Afghanistan and who were now seeking to flee from the Taliban.

‘It is a very frustrating situation for everyone, because even those who reach Kabul, access to the airport is very complicated,’ Robles said. ‘The Taliban are becoming more aggressive, there is gunfire, violence is more obvious.’

The Taliban has allowed the airlift to continue without major interference so far. But at a press conference in Kabul, Taliban spokesman Zabihullah Mujahid said the group would accept ‘no extensions’ of the deadline.

Mujahid also said the Taliban is still allowing foreign nationals to leave but preventing Afghans from reaching the airport on the grounds that it is dangerous and their skills are are needed to rebuild the country. ‘We are asking the Americans please change your policy and don’t encourage Afghans to leave,’ he said.

The US increased its airlift of evacuees from Afghanistan to the highest level yet on Tuesday. About 21,600 people were flown safely out of Afghanistan in the 24-hour period that ended early on Tuesday, the White House said, far more than the 16,000 moved out the previous day.

Meanwhile, according to numerous reports, the CIA director, William Burns, secretly visited Kabul on Monday to meet with the Taliban’s top political leader, Abdul Ghani Baradar, although the White House declined to confirm.