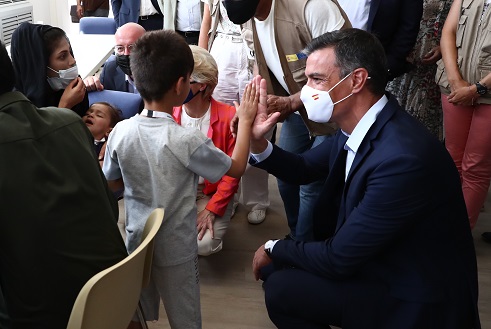 The President of the United States, Joe Biden, and Spanish Prime Minister Pedro Sánchez have agreed two military bases in the south of Spain can be used to receive refugees from Afghanistan who have worked for the US government, the Spanish government said on Sunday.

During a 25 minute phone call on Saturday night, Biden and Sánchez agreed that Morón de la Frontera near Sevilla and Rota near Cadiz can be used for refugees from Afghanistan fleeing the Taliban, until onward travel to other countries is organised.

‘Pedro Sánchez and Joe Biden agreed the use of the bases of Morón and Rota to host Afghans who worked with the US while in transit to other countries,’ the Spanish government said in a statement on Sunday. Both leaders agreed ‘on the need for the international community to act in a co-ordinated and supportive manner, especially to facilitate evacuation and repatriation operations’.

The statement also said that the two leaders had spoken about ‘the mechanism that Spain has put in place to act as a hub for the EU’s External Action Service [see below], for Afghan citizens who have collaborated with the European Union and other personnel in the service of European institutions’.

Tens of thousands of Afghans were still racing to try to flee the country and the threats posed by a new Taliban regime on Sunday, as the US warned of security threats at the gates of Kabul airport. At least 20 people have been killed in and around the single-runway airfield in a week, a NATO official said. But terrified Afghans continue trying to flee, and the US and its allies have been unable to cope with the huge numbers of people trying to get on evacuation flights.

Sánchez also tweeted on Saturday: ‘I have just had a meaningful conversation with President Joe Biden, in which we have addressed several topics of common interest, particularly the situation in Afghanistan and the collaboration between our both governments in the evacuation of citizens from that country.’

A plane carrying 110 Afghan evacuees and their families arrived at the Torrejón de Ardoz air base in Madrid on Saturday night, which is to be used as a European Union hub for coordinating their onward journeys. The flight included 36 people who had worked for the US administration in Afghanistan.

Of the 110 people from Afghanistan on board the A400M aircraft, Spain’s Foreign Affairs Minister José Manuel Albares confirmed that the evacuees were Afghans who worked with Spain and Afghan staff from the Spanish embassy. Among them were three families.

The hub is to be used as an access point for evacuated Afghans who have worked with Spain or with European Union institutions. The asylum seekers will be distributed among EU member states after their arrival.

The first A400M flight arrived on Spanish soil on Thursday morning at 4.30am at the Torrejón de Ardoz air base. It was carrying 53 people, five of whom were Spanish nationals. The rest were Afghans who had worked with Spain, some accompanied by their families, including a dozen or so children.

The arrivals are due to spend 72 hours on the air base before they are gradually distributed among the state shelter network or in the case of families, housed in apartments. Further flights are currently underway, despite the chaos at Kabul airport.

Charles Michel tweeted that he was ‘grateful to Spain and Pedro Sánchez for having set up a facility to temporarily host EU’s Afghan staff and families evacuated from Kabul. While helping them, you are helping the EU to live up to its moral obligations’.

Ursula Von der Leyen tweeted that she was grateful to Spain ‘for having taken the initiative to coordinate the reception of incoming Afghan EU Delegation staff and their families and for setting up this reception hub’.

She said she was ‘moved by the outstanding commitment and extraordinary strength we have witnessed today at the reception hub in Torrejón, Madrid. It is our moral responsibility to help those who arrive in Spain, and those who remained in Afghanistan.’

Von der Leyen also said that the European Union had not recognised the Taliban, nor is it holding political talks with the militants, a week after they seized control of Afghanistan.

She said she would propose an increase in the 57 million euros in humanitarian aid which the Commission had allocated this year for Afghanistan, but insisted the EU development aid would be tied to the respect of human rights, good treatment of minorities and the respect for the rights of women and girls.

‘We may well hear the Taliban’s words but we will measure them above all by their deeds and actions,’ von der Leyen said.

After a peak in 2015 when more than one million migrants came to the EU, mostly from Syria, Afghanistan and Iraq, the EU has cut the number of arrivals thanks to a deal with Turkey which receives EU funds to host asylum seekers in its territory.

You can click here to read her full statement.