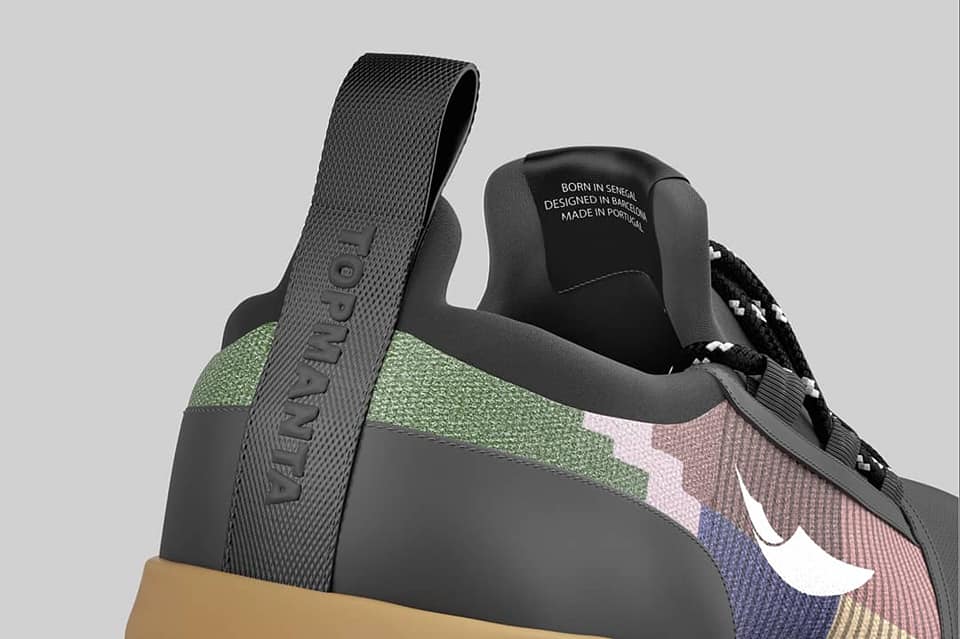 This week saw the launch of the latest product range from ethical clothing brand ‘Top Manta’, as it continues to develop its brand and products and also help revive the artisanal shoe industry in Spain.

The trainer collection, called Ande Dem, is set to compete against global giants such as Nike, and is the latest launch from the organisation that was originally established in 2017 from a co-operative of unlicensed street sellers. The term ‘Top Manta’ borrows its name from how the vendors use blankets (mantas in Spanish) to carry their products from place to place, and put them on display in some of the most prominent tourist areas of Barcelona and in many other towns and cites.

Back then, Top Manta products were imported from China with a logo added to reflect their branding. Over the last couple of years, the brand has developed production links closer to home and a focus on producing rather than importing, and the new sneakers are made in Alicante in Spain and Porto in Portugal.

Whilst competing against companies with huge budgets to throw behind their products that are often mass produced in low-income countries, Top Manta aims to be responsible in its sourcing and production.

Ande Dem, the name of the new trainer collection, is a phrase from the Wolof language meaning ‘Walking Together’. The language is spoken by most of the co-operative members, who are largely Senegal born and travelled to Barcelona in search of better lives.

This background is also incorporated in the Top Manta logo of a blanket, to reflect the way the sellers on the streets display their products and also waves, being a reference to the dangerous journeys on small boats that many of the manteros experienced in arriving in Spain from Africa.

The new collection was launched at an event at the IDEAL Digital Arts Centre in the Poble Nou district of Barcelona on Tuesday, against a backdrop of projections of sand and sea to represent the journeys of the migrants, intended to contrast their ethical product with the exploitative nature portrayed of major brands.

The group proudly stated that their brightly coloured sneakers were ‘born in Senegal and designed in Barcelona without exploiting anyone’. Their bold slogan also made reference to their responsible ethos compared to bigger, global brands such as Nike, stating ‘it’s not about just doing it; it’s about just doing it right’.

A group of manteros were behind the design of the sneakers, along with Sara González de Ubieta, a local architect and designer, and Helga Juárez, a graphic designer.

So far, 400 pairs have been produced and can be bought online or in the Top Manta shop in Barcelona. Profits will be used to continue to develop the brand and support manteros and their families.

The pandemic resulted in a devastating year for the street vendors, with lockdowns and significantly reduced levels of tourism causing even more uncertainty to their livelihoods.

Speaking to The Guardian on behalf of Top Manta, Lamine Sarr said, ‘It’s been really difficult during the pandemic. These are people who can’t claim unemployment benefit and there’s been no government support. We established a food bank and we set up sewing machines and people came here to the shop to work on a voluntary basis sewing shoes and clothes’.

Explaining why Top Manta sneakers were desirable over big named brands, Sarr went on to say that ‘instead of supporting a multinational that exploits desperate people in the developing world, you are helping a community that is discriminated against in every way. You are helping people to become legal and work for a decent wage’.

Top Manta is not only succeeding in developing an increasing brand presence, it has also allowed 120 manteros to become legally resident in Spain and created 25 jobs, along with offering training in textiles and language classes to migrants in the city.

Describing itself as an ‘ethical and social brand, intent on changing society and bettering the lives of the most vulnerable’ the launch of its latest collection was said to be ‘a day we’ve been waiting for for years, a day that’s so important for us’.

Sustainability and ethical sourcing and production is becoming an important priority throughout the clothing industry, and Top Manta is developing into an increasingly attractive brand that is not afraid of taking on the big global brands and making a difference to the livelihoods of the people behind its origins.