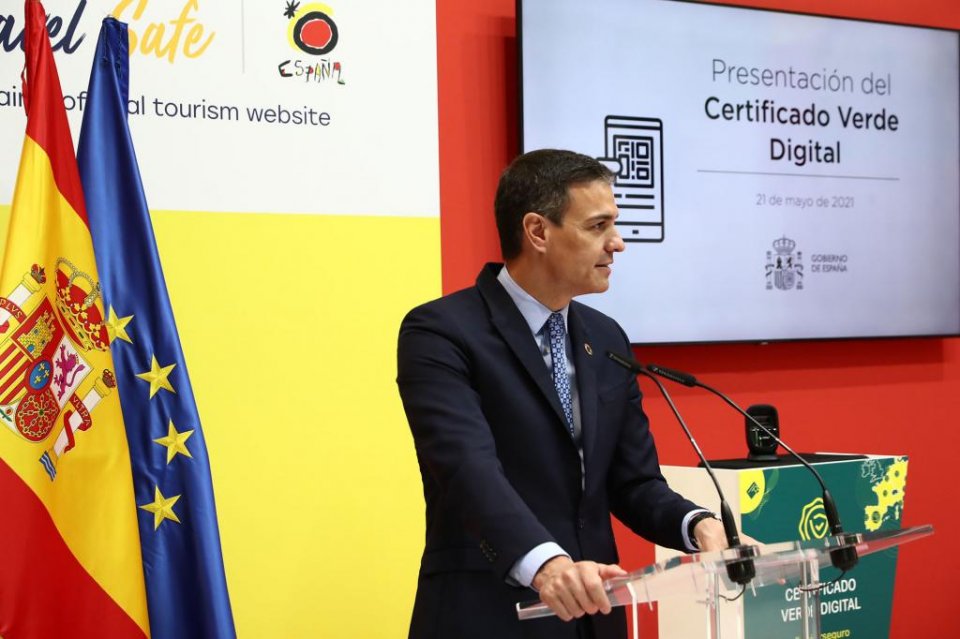 The Spanish government has today announced that travellers from the UK can visit the country from Monday 24 May without the need to quarantine or provide a negative PCR Covid-19 test – even though Spain still remains on the UK government’s ‘amber list’. Filling in a health control form will be required.

Travellers from the UK to Spain must have previously been residing or staying in the UK for the last 14 days before travelling to Spain, in order to avoid quarantine or having to show a negative PCR test. Since Brexit, UK visitors and tourists to Spain (without legal residency status in Spain) can stay in Spain without a visa for a maximum period of 90 days within six months.

Speaking at the FITUR travel show in Madrid on Friday, Prime Minister Pedro Sánchez said that ‘Spain will be delighted, very delighted to welcome all British tourists’ and tourists from other countries with a low incidence rate of Covid-19.

Sánchez also said it was ‘extraordinary news’ that the EU is poised to introduce by 1 July a system of Covid-19 travel certificates for EU citizens, allowing them to travel freely across the bloc. At the Spanish Tourist Board’s stand on Friday at FITUR, a presentation of the ‘digital green certificate’ was also made.

Sánchez confirmed that from Monday 24 May, travellers from the UK and Japan will be able to enter the country without undergoing quarantine or showing a negative PCR test. He added that, from 7 June, ‘tourists from other countries with which there is not complete free movement, among them the United States, will be able to enter Spain provided they count on a certificate showing they have received their full vaccinations’.

Sánchez also conveyed messages in English, so that, in his own words, they reached the international press: ‘I am pleased to inform you that the ministerial order will be officially published today exempting citizens from the UK and other countries such as New Zealand, South Korea or China from temporary restrictions for non-essential trips to Spain,’ he said. ‘I can therefore announce that from next Monday 24 May, Spain will be delighted to receive British tourists again into our country.’

However, Spain remains on the UK government’s ‘amber list’, meaning that Britons currently should not travel to Spain for non-essential reasons and must self-isolate for 10 days on return.

Spain’s announcement follows Portugal also allowing British tourists to travel without restrictions, yet the EU has delayed its decision about which non-EU countries can be added to its safe ‘white list’.

Earlier this week, the EU announced that its ambassadors had agreed to ease restrictions on international travel and re-open borders for non-essential trips. Non-EU countries would be added to its ‘white list’ if the Covid-19 incidence rate was below 75 in 100,000 people.

The UK incidence rate is currently 22 in 100,000, but there is concern about a new Indian variant and it is understood that EU ambassadors are delaying a decision on whether to add Britain to the list until more is known about its spread and ability to transmit.

It is understood that the EU decision may now be put back another 2 weeks.

🛫 From 00:00 of May 24th Spain lifts travel restrictions from 🇬🇧

What does it mean? 🤔

Details are also set to be released soon about the EU Digital Green Certificate. The European Parliament reached a provisional deal on Thursday about the use of a digital certificate to facilitate travel and help revive tourism in Europe. The certificate will show a person’s vaccination status or proof of a negative test result.

Announcing the agreement on the certificate scheme, the official statement declared that the EU certificate is now ‘well on track to be ready end of June, as planned’.

The European Commission said the certificates will be issued in digital format and designed to be shown either on smartphones or paper. It guaranteed that ‘a very high level of data protection will be ensured’.

Spain’s announcement today on lifting restrictions for UK travellers demonstrates the country’s commitment to open up international tourism as quickly and safely as possible.

Today’s announcement will be a welcome boost to Spain’s travel and hospitality sector, who are desperate to see international tourists again and begin to recover from the devastation of last year’s ‘lost’ summer. In 2020, foreign tourism to Spain plunged 80% to 19 million visitors – its lowest figure since 1969.

However, there is still uncertainty about when the UK government will consider moving Spain onto its ‘green list’ of countries that allow non-essential travel. The British government is reviewing Covid-19 data and making adjustments to its travel lists every three weeks.

Spain is hoping that its continued progress with its vaccination programme and reducing infection levels will allow moving the country onto the UK’s green list and fully open up to British tourist in the weeks ahead.

Extremadura in English – news round-up (24 May)

Many fully-vaccinated British passport holders living in Spain, likely to be readers of this publication, are wondering how and when they may be able to make short visits back to the U.K. to see loved ones. The British Consulate has been unable to provide an answer, advising that the present situation, with Spain being on the Amber list, would require such people to quarantine on arrival in the U.K. This would be totally unfeasible for most people who only wish to make short visits. Could “Spain in English” please investigate the matter of vaccinated Ex-pats, many of whom are senior citizens and who pose no tangible risk to either themselves or the British population? Thank you.