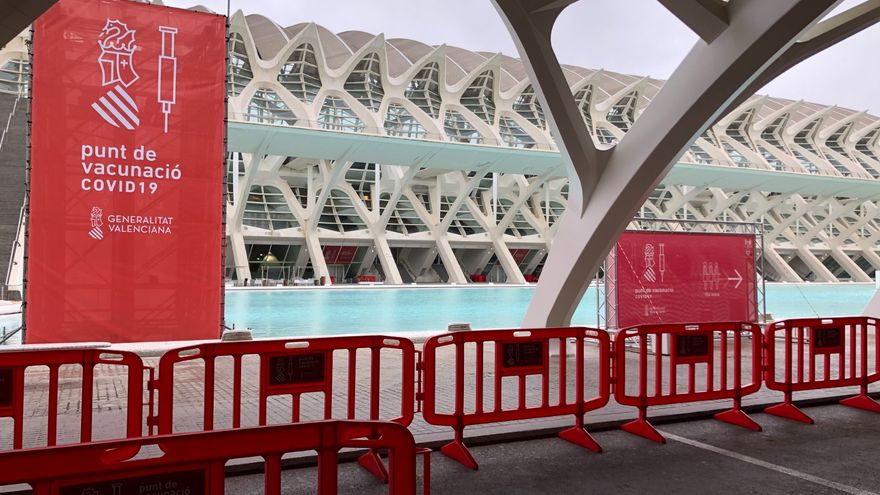 Mass vaccination of over 70s begins

Four mass vaccination centres are to begin operating this week in the Valencia region, with the capacity of administering 4,000 jabs per hour, it was announced on Saturday.

Regional president Ximo Puig made the announcement during a visit to one of the mass vaccination centres, located in La Ciudad de las Artes y las Ciencias.

The other centres which have been adapted for vaccinations are El Palacio de Congresos in Castelló, La Ciudad de la Luz in Alicante and La Institución Ferial Alicantina in Elche.

During the coming week, more than 185,000 doses are to be administered, the majority being first jabs for those aged between 70 and 79, with Pfizer or Moderna vaccines, and those between 60 and 65 with AstraZeneca. There will also be second doses given to those who now require them.

More than 1,000 healthcare professionals will be working in the four mass vaccination centres, enabling them to reach a rate of 4,000 jabs per hour, although this will depend on the supply of vaccines. Puig said he hoped that the Janssen vaccine could soon begin to be used and that the age range for using AstraZeneca would also be extended. He said that the health department has the capacity for mass vaccination, but that it depended on having sufficient doses.

However, he pointed out that in the past three weeks ‘the number of vaccines given has doubled’, going from 640,000 to 1.2 million for the Valencia region. ALSO READ: Covid-19 Vaccinations in Spain

In addition to the mass vaccination centres, there are 48 local points throughout the region, as well as those which have been used so far.

Valencia Health Minister Ana Barceló – who accompanied Puig on Saturday’s visit – said that it was very important that people coming for their vaccination kept to appointment times and didn’t arrive early, in order to avoid large crowds congregating.

From Monday, those being vaccinated will receive a leaflet which will include a card showing details of the jab given, the date and the batch number. The document will act as proof of going to the vaccination centre and will include recommendations against Covid-19 and post-vaccination. It is important, however, to point out that the card is not to be confused with the ‘digital green certificate’ that the European Union is currently developing.

As health minister Ana Barceló received the AstraZeneca jab this week, she underlined that the vaccine is safe and reliable, and that the benefits far outweigh the possible adverse side effects.

Barceló, who is from Sax, in Alicante, got the jab at the Pabellón Azul in Elda, as she is in the age range currently being called, those between 60 and 69. She said that the vaccine is the start of ending the pandemic, adding that there many millions who have been vaccinated and that it’s necessary to continue with the process to try and regain a certain normality. ‘It’s the only exit door to the health crisis and the pandemic,’ she said, encouraging all citizens in the Valencian region to have the vaccine.

Valencians are more concerned about the psychological consequences of Covid-19 than the effects on the economy and jobs, a study has found.

According to the infobarómetro (a measure of public opinion) carried out last month, 34.7% of those questioned said their main worry about the pandemic was its psychological effects, almost double those who put economic consequences first (18.9%), although they said the Council should help production sectors of the economy and reduce unemployment in the city.

The results of the survey, which was carried out by phone in March questioning 2,300 randomly chosen over 18s, were presented on Thursday by Carlos Galiana, councillor for Administrative Control. Questions also touched on aspects such as town planning, neighbourhood needs, heritage, safety, co-existence and civil participation.

Galiana reported that 67% of the population consider Valencia to be a ‘very comfortable, pleasant city to live in’, especially because of the climate, the availability and variety of shops and services as well as the quality of life. He said Valencians have ‘very high self-esteem’ about their city, with 83% thinking that Valencia is the best Spanish city to live in, and 45% consider it ‘the best in the world’.

Students should only repeat in exceptional circumstances

The education department has announced that pupils will be allowed to move up to the next school year, as well as obtain the ESO and Bachillerato Certificates, regardless of how many subjects they have failed.

The resolution, published in the BOE on 31 March, was explained to teachers this week as they returned from their Easter break. It also gives guidance on how students should be evaluated at the end of this final term.

Due to the need for social distancing because of the Coronavirus pandemic, many students have only been attending school on alternate days, putting them at an unfair disadvantage compared to those who have had class every day. The result of this could be many students don’t achieve their potential and even fail subjects they would be expected to pass.

Normally a student who has two or three failed subjects, especially core subjects, would be made to repeat the year, but as occurred in 2020 this will not be the case this year.

However, if the teaching body feels it is justified, a student can be made to repeat, but the education department has emphasised this should only be in very exceptional, well-justified circumstances, and the norm should be to let students pass to the next academic year.

The idea of repeating has long been an integral part of the Spanish education system, as well as a point of contention. It certainly goes against the grain for anybody coming from systems where repeating is rare. In Spain the philosophy is that a student who hasn’t made any effort all year shouldn’t be given the prize of moving up, or put another way, they should be punished by being held back. The new education law, the LOMLOE or Law Celaá as it’s also called, after the education minister who brought it in, appears to be moving away from making students repeat as well as placing more value on effort and attitude.

Tourism has long been one of the main industries on the Costa Blanca, but after the past year, the sector is looking for new and innovative ways to attract visitors. This week saw the unveiling of the first International Health and Wellbeing Congress which will be held on Friday 23 April at the SHA Wellness Clinic in l’Alfàs del Pi, with the aim of analysing the region’s potential for offering this type of holiday.

President of the Alicante provincial government, Carlos Mazón, presented the upcoming event, saying that health tourism is a new opportunity to revive the tourism sector. He said the province was well-equipped to compete in this area and pointed out that health tourists spend between six and 10 times that of general holiday-makers, with an average spend per stay of €10,000, compared to between 1,200 and 2,500 of normal tourists.

Mazón continued: ‘The province of Alicante has an exceptional climate, with an annual average temperature of 18ºC and more than 3,000 hours of sunshine, as well as a strong tourism industry, excellent public and private healthcare systems and a wide knowledge base of science and innovation which Alicante University represents.’

He explained that health and wellbeing tourism is ‘a niche business and another opportunity to open new doors for the tourism sector from professionalism, health, investigation and wellbeing’.

Benidorm’s deputy mayor, Ana Pellicer, who also attended the presentation, encouraged those interested to sign up and participate in next Friday’s event which will be streamed online. You can click here for more information and to enrol.

Infection levels and hospitalisations continue to be low in the Valencia region and the vaccination roll out continues with a total of 1,240, 263 doses so far administered.

There have been 54 new outbreaks, higher than last week’s 42. Nine were work-related, and 44 were related to socialising.