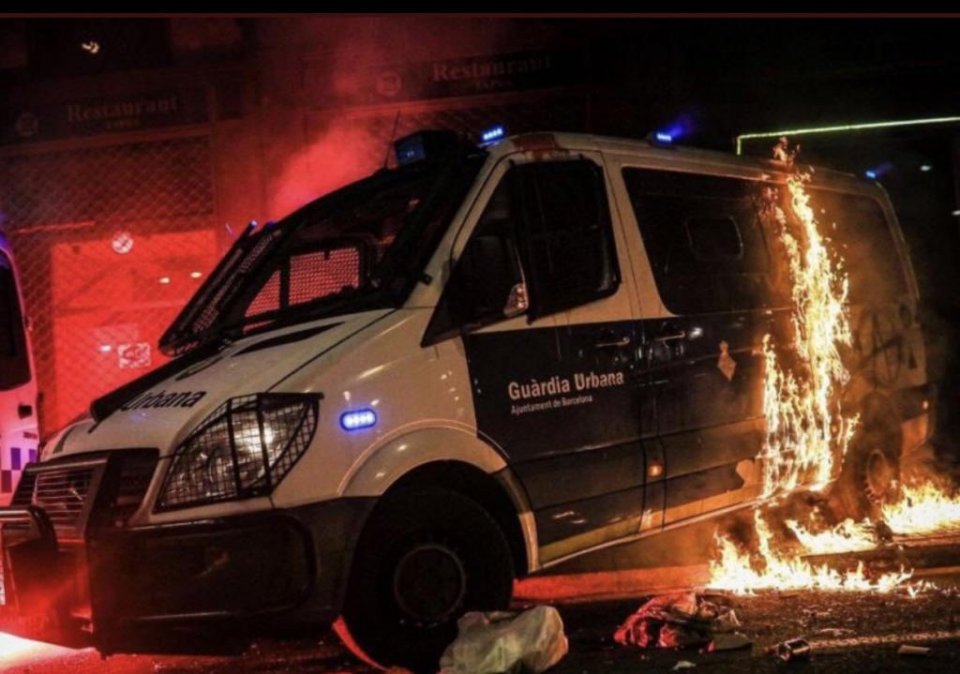 A police van was torched and looting broke out on Saturday night in Barcelona, as police and protestors clashed in new demonstrations against the jailing of the rapper Pablo Hasél.

Hasél was detained by police on 16 February after barricading himself in at the University of Lleida and refusing to turn himself in to serve a prison sentence of nine months. He had been condemned over tweets in which he glorified terrorist attacks, likened former king Juan Carlos I to a mafia boss, and accused police of killing demonstrators and migrants. Following his jailing, protests had taken place for nine consecutive nights, mainly across Catalonia but also in Madrid, Valencia and other cities – and there had been a brief respite before Saturday’s violent clashes.

The on-going protests have also expanded to include demands for action regarding other social causes, such as the EU’s unemployment rate and increasing rent prices. On Saturday evening in Barcelona, over a thousand protestors marched towards the central Plaça Universitat, arriving at 6pm, with a banner stating, ‘Without a future, we have nothing to lose’.

They called for the repeal of Spain’s controversial free speech ‘gag law’, as well as labour reform, the regulation of rent prices, and to also voice anger against evictions. Others also called for the right of self-determination for Catalonia, a ‘total amnesty’ for the jailed Catalan leaders, and for the anti-riot brigade of the Catalan police forces (the Mossos d’Esquadra) to be dissolved.

But after the initial peaceful march, small packs of protestors broke off and smashed the windows of at least two banks and carried out further acts of vandalism. Police made 13 arrests, including of two people suspected of setting fire to a police van.

‘Barricades and looting continue in the area of central Barcelona,’ the Mossos police tweeted on Saturday night. ‘For safety do not approach this area.’ They added that some ‘hooded groups’ were looting along Barcelona’s La Rambla boulevard, while firefighters were dealing with fires in shops and banks, adding there were ‘several banks with serious damage’.

More than 110 protestors have been arrested since the jailing of 32-year-old Hasél. The issue has also provoked a debate about freedom of expression, and driven a rift between Prime Minister Pedro Sánchez’s PSOE socialists and its junior coalition partner, the left-wing Podemos group, which has supported the protests.

On Saturday, Sánchez tweeted: ‘The acts of vandalism and violence that Barcelona is suffering tonight are unacceptable. All our support to the Guàrdia Urbana and Mossos police officers.’

ALSO READ (17/2/21): Protests and vandalism follow jailing of rapper, with 14 arrests and 33 injured