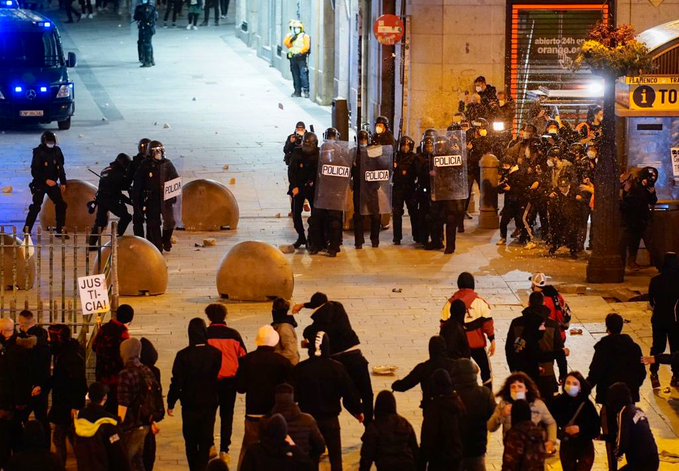 Police fired tear gas and rubber bullets at protestors in Madrid and Barcelona on Wednesday night, after thousands took to the streets for a second consecutive night to demand the release of the jailed rapper Pablo Hasél. Tuesday had already seen 14 arrests and over 33 injured in protests – and it was also confirmed that a young woman has lost an eye during the protests.

Hasél was detained by police on Tuesday after barricading himself in at the University of Lleida and refusing to turn himself in to serve a prison sentence. He had been condemned to 2 years and 9 months in jail in two separate cases by Spain’s National Court for ‘glorification of terrorism’ and ‘slander against the crown’ in the content of some of his tweets and lyrics. He had been given a 10-day window to voluntarily enter prison, but had refused and barricaded himself inside the university.

Protests in Madrid’s central plaza, the Puerta del Sol, were initially peaceful on Wednesday night, with people clapping and chanting ‘No more police violence’ and ‘Freedom for Pablo Hasel’. But after a few protestors began throwing glass bottles and stones they had loosened from the pavement, police eventually charged into the crowd, wielding their batons. Some protestors responded by setting fire to containers to create barricades in the narrow streets around the plaza.

On Wednesday night, the president of Madrid’s regional government, Isabel Díaz Ayuso, tweeted:  ‘Thanks to the police for defending peace in the streets of Madrid. My solidarity with the wounded police officers and my absolute condemnation of the criminals who have assaulted the streets with the support of the ultra-left.’

In Barcelona, there were similar scenes as the local police, the Mossos d’Esquadra, fired rubber bullets into the crowd. When protestors began throwing projectiles at the armoured police vans, the Mossos retaliated by shooting rubber bullets. Protestors set fire to garbage bins in many streets in central Barcelona.

Protests also took place in Lleida, Tarragona and Girona. But as peaceful marches descended into altercations, with rioters setting barricades on fire and police firing foam bullets, there were 29 arrests overall in Catalonia.

A young woman in Barcelona lost an eye during the protests on Tuesday, it has been confirmed. The Irídia Centre, which defends civil and political rights and first reported the incident, said the injury was caused by a foam bullet, yet this has not been confirmed by the official authorities.

According to the group, the injured party is a 19-year-old woman. During the riots, an image of the girl with a bloodied face had been shared on social media. Irídia said that ‘for years’ it has been arguing that foam bullets are dangerous and can lead to serious injuries and ‘even death’. They also demand that the police put in place appropriate mechanisms to ensure no unwarranted use of foam bullets.

ALSO READ: Protests and vandalism follow jailing of rapper, with 14 arrests and 33 injured