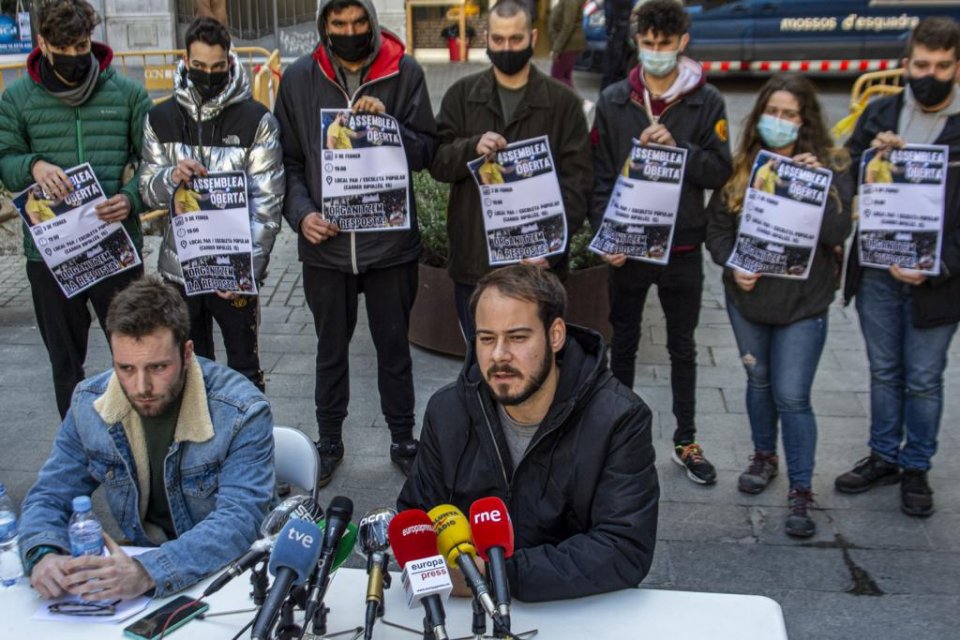 The Catalan police (Mossos d’Esquadra) have now detained the rapper Pablo Hasél, who had been asked to turn himself in to serve a prison sentence [see earlier full report below]. On Monday he had barricaded himself inside the University of Lleida in Catalonia, with around 50 supporters.

‘I am locked up together with many supporters in the University of Lleida,’ he had tweeted on Monday morning. ‘They will have to break it open to arrest and imprison me.’

At around 8.30am on Tuesday morning, the Mossos police arrived and detained Hasél. About 12 Mossos agents managed to dismantle the barricade and no scuffles have been reported. Images of the detention can be seen in the Tweet below from the programme ‘La Hora de La 1’, from Spain’s public broadcaster TVE.

Spain’s National Court had sentenced the rapper to two years and nine months in jail for two separate cases relating to his songs and tweets. The court deemed them to be a ‘glorification of terrorism’ and slander to the crown and Spanish law enforcement.

On 28 January, the court had given him 10 days to enter prison, after the Spanish Supreme Court confirmed the latest verdict and the Constitutional Court dismissed an appeal. Hasél made it clear that he had no intention of surrendering himself voluntarily.

Spain will ease its restrictions on free speech, the government announced this week, coinciding with a nationwide furore over the imminent imprisonment of Pablo Hasél.

Hasél, originally from Lleida (Catalonia) and whose real name is Pablo Rivadulla Duro, has been ordered by the National Court to turn himself in by the end of this week to serve a nine-month prison sentence imposed in 2018 under a security law known in Spain as the ‘gag law’.

Incriminating posts on the rapper’s Twitter account, as well lyrics of his songs uploaded on YouTube, led to his conviction. Hasél, however, argues that he is being imprisoned for ‘stating objective facts’.

The so-called ‘gag law’, which has resulted in these sentences, was enacted in 2015 by the government at the time led by the right-wing People’s Party (PP), which insisted it was needed to prevent the glorification of banned armed groups such as the Basque separatists ETA. The law also bans speech not only for glorifying violence, but also for insulting religions or the Spanish monarchy.

The rapper’s lyrics and tweets, which included references to banned guerrilla groups, compared a court to Nazis and also called former king Juan Carlos I a mafia capo, were found under the 2015 law to have encouraged violence and insulted the monarchy.

In a recent case, which almost echoes that of Hasél’s, another rapper Valtonyc chose to flee to Belgium in 2018 after being sentenced to over three years in prison on charges including insulting the monarchy and praising terrorist groups. Although Spain requested his extradition, it was rejected by the Belgian courts. It has since been appealed by Spanish authorities.

Hasél’s case is set to be one of the first in the country whereby the conviction of so-called ‘crimes of opinion’ has led to imprisonment. It has sparked widespread reaction from public figures and human rights organisations.

This week, more than 200 artists, including film director Pedro Almodóvar, actor Javier Bardem and singer Joan Manuel Serrat, signed a petition against Hasél’s jailing, calling for the law to be changed. The signatories claim that this type of crime does nothing but curtail the right of ideological and artistic expression, that the imprisonment of the rapper makes people who need free speech to exercise their trade more vulnerable – calling for the elimination of the criminalisation of criticism of institutions, because it ‘violates freedom of expression’.

Human rights organisations have also reacted. Roberto Spano, the president of the European Court of Human Rights, issued a warning to Spanish authorities this week that Hasél’s case is one of many that have resulted in disproportionately harsh sentences, adding that ‘public office holders – ministers, kings – because of the public nature of their functions, must accept a wider range of criticism’.

Amnesty International also published a statement insisting that ‘no one should be criminally convicted of tweeting or singing something disgusting or scandalous’, highlighting that in Spain around 70 people have been convicted under the law in 2018 and 2019.

With mounting public pressure, just hours after the signed petition was published on Monday, a brief statement was issued by Moncloa [the Spanish prime minister’s office] stating the government’s plans to ‘review offences linked to excesses in the exercise of freedom of expression’.

The government later revealed that the Justice Ministry will propose a review of crimes ‘so that only acts that clearly create a risk to public order or encourage some kind of violent conduct will be punishable through measures that deter but do not deprive individuals of their freedom’.

On Tuesday, the governing coalition’s Podemos party registered its own ‘bill for the protection of freedom of expression’, which the political party is currently drafting. It is expected that the group will push to completely eliminate the possibility that, insulting the crown and state institutions, offending religious feelings and glorifying terrorism, are punishable by law.

However, the Justice Ministry, headed by a member of the main coalition governing party, the PSOE’s Juan Carlos Campo, has not mentioned repealing the crimes of glorifying terrorism or offending religious sentiment. Instead, the Ministry has insisted that the reform will be executed with great care – taking into account the difficulty of ‘drawing the line between the exercise of freedom of expression and allowing criminal behaviour’.

There is no set date for a draft document of the reform nor has the Ministry made any direct reference to Hasél’s case. It is understood that any future changes to the law will not prevent the jailing of Pablo Hasél, who has stated that he will not turn himself in, as requested by the National Court. His imminent imprisonment is likely to happen in the coming days.

ALSO READ (13/9/18): Willy Toledo released after being detained for blasphemy

Fears for tourism sector, as Spain records lowest number of visitors in first 6 months of 2021