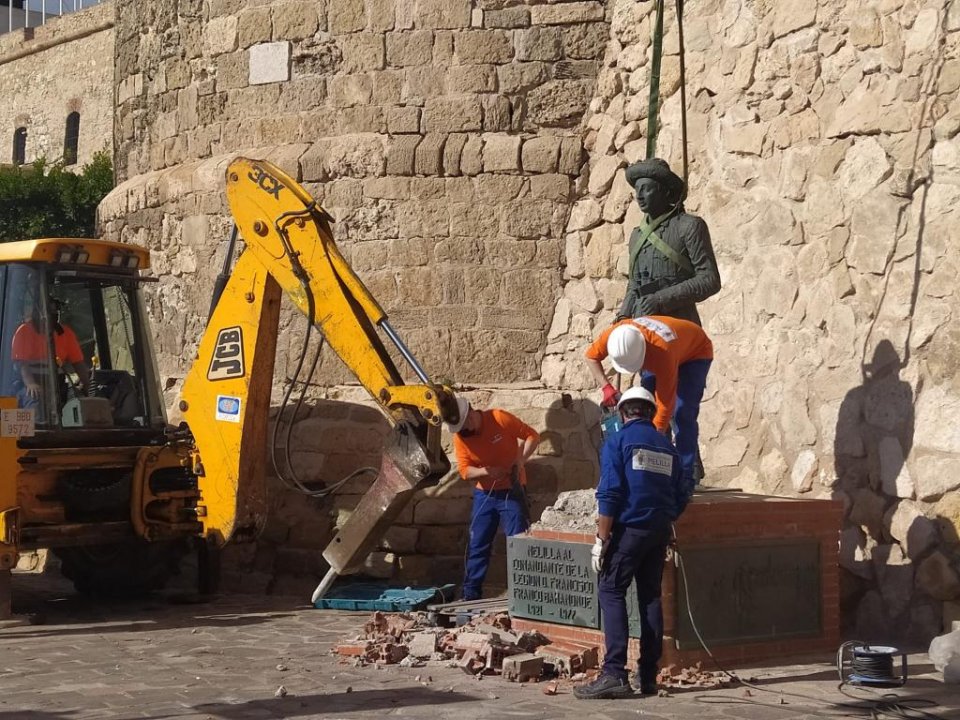 The 40th anniversary this week of the attempted coup d’état in the Spanish Congress has also coincided with the removal of the last statue of Franco in Spain.

The former dictator had led military rebels in the 1936 coup that resulted in the outbreak of the Spanish Civil War. On Tuesday, a small crowd gathered to watch workmen remove the figure of Franco in Melilla, a Spanish autonomous city located on the northwest coast of Africa.

Erected in 1978, three years after Franco’s death, the statue commemorated his role as commander of the Spanish Legion in the Rif War. The war was fought in the 1920s by Spain and France, against the Berber tribes of the mountainous region of Rif in Morocco.

After a local assembly voted in Melilla on Monday to remove the figure of the former dictator, the city’s socialist (PSOE) representative for education and culture, Elena Fernández Trevino, said: ‘This is a historic day for Melilla,’ adding that it was ‘the only statue dedicated to a dictator still in the public sphere in Europe.’

The only party to vote against the decision in Melilla was the far-right Vox party, who argued that the statue celebrated his military role and not his dictatorship, and thus could not be considered within the framework of the Historical Memory Law.

Passed by the Spanish Congress in 2007, some of the provisions of the Historical Memory Law are: the condemnation of the Francoist state, prohibition of political events at Valley of the Fallen, state aid in the tracing, identification and eventual exhumation of the victims of Francoist repression, and the removal of Francoist symbols from public buildings and spaces.

Since the law was approved, many high-profile removals have taken place, one of the most being the exhumation of the body of Franco on 24 October 2019 from the Valley of the Fallen. To this date, however, there still exists public place names throughout Spain that honour the former dictator.

In September 2020, the Spanish cabinet approved a draft bill of a new ‘Democratic Memory Act’ to ‘comprehensively redress the victims of the Spanish Civil War and the Franco dictatorship’, whilst also seeking to ‘boost policies on truth, justice, redress and guarantees of non-repetition’.