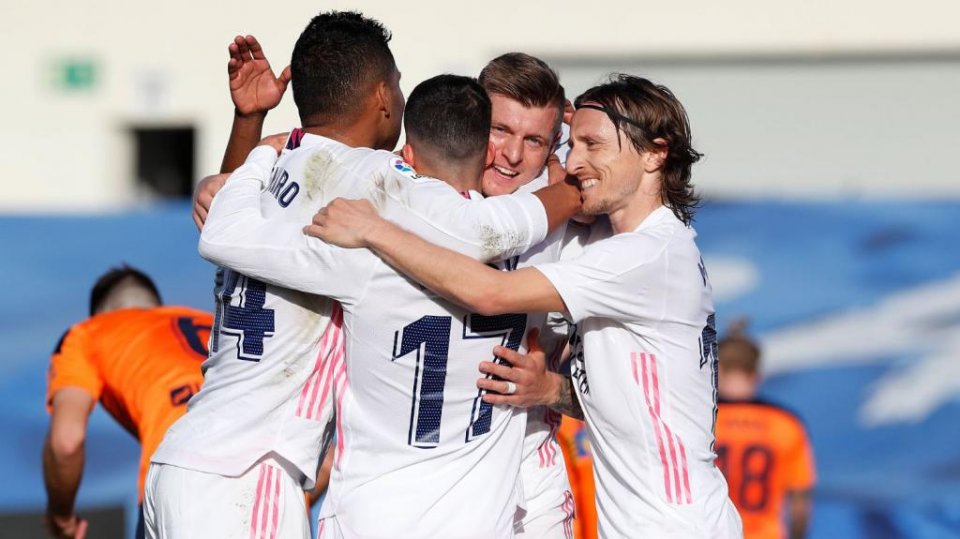 Real Madrid have closed the gap on local rivals and league leaders Atlético to just five points after a comfortable 2-0 win over Valencia.

It was a routine win for the home side, and only took 12 minutes for Karim Benzema to net his 12th league goal of the season with a low curling shot that bounced into the bottom corner.

Three minutes before half-time, Toni Kroos, who got the assist for Real’s first, finished off a nice move by slotting the ball in from the edge of the box.

With a two goal cushion, Real Madrid controlled the match and never looked like faulting. Valencia, in fact, only managed one shot on goal in the entire 90 minutes.

The score finished at 2-0, meaning Real are now just five points behind Atlético. The red and whites do, however, have two games in hand in which they’ll have the opportunity to restore an 11 point lead.

The league leaders were hosted by Granada on Saturday and came away with the three points despite a fairly difficult start.

Granada stifled the visitors for much of the game, which is why it wasn’t until the 63rd minute that Atlético managed to break the deadlock when Marcos Llorente drove the ball low and hard into the near corner from 20 yards out.

But just three minutes later, Yangel Herrera scored a scrappy deflected equaliser to put Granada level. It was not the prettiest of goals but one that the young Venezuelan, on loan from Manchester City, will be happy to claim nonetheless.

Whilst Atlético were unlcuky to have conceded in the way they did, luck seemed to swing back in their favour in the 75th minute when Angel Correa’s shot took a huge deflection to fly upwards over the keeper and into the back of the net.

The second unattractive goal of the game was enough to settle the score and hand the victory to the league leaders who have become synonymous with what English pundits call ‘winning ugly’.

That is not to take credit away from Atlético who have also played some fine football this season, and have undoubtedly revitalised the career of Luis Suarez whose transfer from Barcelona in the summer has proved to be an absolute steal, one that the Catalan giants can only regret.

Yet in spite of playing this season without the Uruguayan, they still managed to prove they’ve got plenty of goals in them on Saturday by putting five past Alavés.

Lionel Messi and Francisco Trincão scored two each before Junior Firpo put away Barça’s 5th late on in the game. Luis Rioja got on the score-sheet for the Basques but it was nothing more than a small consolation.

It was a special day for 21-year-old Trincão, who aside from netting a brace, was making the first league start of his career despite having been used regularly as a substitute throughout the season.

Messi, on the other hand, was making his 505th league appearance for the club, meaning he has now equalled the record held by Xavi which he’ll undoubtedly break in their next league game.

The victory for Barça comes off the back of their shock midweek defeat in the semi-final first-leg of the Copa del Rey away to Sevilla.

Goals from Jules Kunde and Ivan Rakitic mean that Barcelona have got a huge mountain to climb in the second leg if they’re to make it to the final.