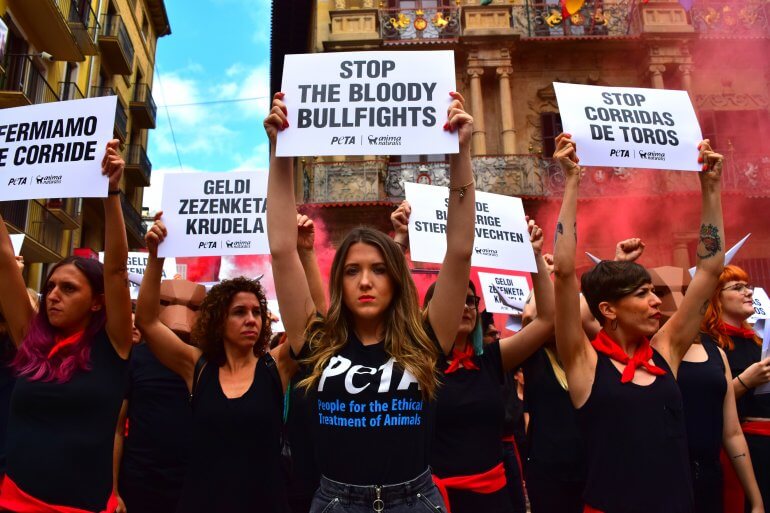 The annual ‘Running of the Bulls’ festival in Pamplona normally starts on 7 July but in 2020 it was suspended due to Coronavirus. The president of the Navarra regional government, María Chivite, has also announced that it will not be possible to hold the event in July 2021.

In April 2020, the People for the Ethical Treatment of Animals (PETA) organisation sent a letter to the Mayor of Pamplona, Enrique Maya Miranda, offering the city €250,000 if it agreed to permanently end the bull-running and subsequent bullfights. Here is an opinion piece by Elisa Allen, director of PETA UK (first published 24 April).

The hilarious thing about anti-bullfighting activists is that each and every single one of them supports genocide of animals they don’t like.

Have a mouse? You know mice are intelligent and social creatures and that leaving out poison to slowly kill them or traps to break their necks or get them stuck in one place where they starve to death is inhumane right?

Hell, these bulls lead better lives than the meat in your hamburger lead. Most of that meat stayed locked up inside a stall not even big enough to move in and crammed full of antibiotics.

First you people need to give up all the animal torture you’re already doing and THEN throw your xenophobic opinions around. Saying “we’re better than that because we don’t watch enough PETA videos or consider just how insignificant these displays of violence are compared to the genocide humans already do.

If this was human vs human the same people complaining would still complain… it has nothing to do with animal rights so much as xenophobia. All culture must be approved by cis white americans.

My attitude towards people who don’t like the corrida is don’t go to them. I once sat next to an English lady in Las Ventas who started complaining practically the moment the alguaciles entered the ruedo. After a few cape passes, when she wouldn’t stop bitching, I bluntly told her to leave if she didn’t like it. So did some other people around us. She left.
PETA is a professional crybaby organization; the horror of it is that people give money to it. If its demonstrators (probably paid) didn’t have bullfighting to bitch about it would be something else. I think that people who have nothing better to do than gratuitously interfere in other peoples’ lives and pastimes should be kept at least two blocks away from whatever they are protesting.