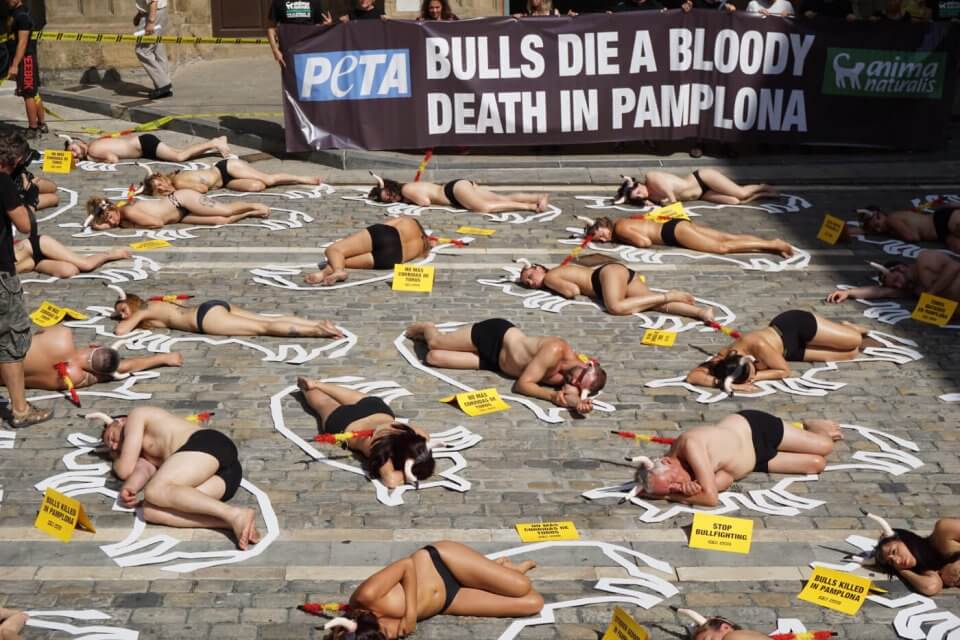 More than 100 activists marched to the beat of drums towards the Plaza Consistorial in Pamplona on Friday, holding signs proclaiming, ‘Stop the Bloody Bullfights.’

Supporters of affiliates of PETA (The People for the Ethical Treatment of Animals) and Spanish animal-protection group AnimaNaturalis – half of whom were ‘runners’ and half of whom were ‘bulls’ – shot blood-red flares into the sky to call for an end to bullfighting and bull-running in the northern Spanish city at the annual San Fermín festival.

The activists – who had travelled from around the world – then lay down nearly naked inside dozens of silhouettes of bulls, representing the ‘crime scene’ of the number of animals that will be killed during the eight day fiesta.

Pamplona’s annual San Fermín festival has become a symbol of Spanish culture, attracting thousands of tourists each year to watch the running of the bulls.

The week-long festival kicks off on Saturday with the ‘chupinazo’ – a rocket launch at the city hall. The eight days are filled with early morning bull runs as people dressed in the traditional white and red outfits run for their lives alongside a herd of bulls towards the bullring. Bullfights are then held later in the day.

Each day at 8am hundreds of people race with the six bulls, charging along a winding, 848-metre course through narrow streets to the city’s bullring, where the animals are killed in the daily bullfight. The festival dates back to medieval times and also features religious processions, folk dancing, concerts and round-the-clock drinking.

Animal rights’ groups traditionally stage a protest in front of Pamplona’s town hall on 5 July, a day before the city explodes into revelry at noon on 6 July.

‘Young bulls who have had very little contact with humans are transported to Pamplona on a long and stressful journey,’ PETA wrote in a petition calling for the spectacle to be banned.

‘The festival organisers confine them to a small pen for several days. Then, they release them into a noisy, chaotic mob of people – mostly tourists – who chase the terrified animals through the narrow streets of the city. The bulls often crash into walls or lose their footing, sometimes breaking bones,’ it continued.

‘And that’s not the end of it. Later that day, they’ll be tormented to death in the bullring.

‘At least 48 bulls will be barbarically stabbed to death during the festival. The mayor of Pamplona needs to stop this bloodbath,’ it said, urging people to sign the petition.

PETA has also in previous years protested the centuries-old tradition, made famous outside Spain by Ernest Hemingway’s book The Sun Also Rises.

‘It’s 2019, and no living being should be slowly stabbed to death for the sick satisfaction of a rowdy mob,’ says PETA Director Elisa Allen. ‘PETA and the rest of the world are absolutely disgusted that Pamplona continues to smear its own name with this out-of-touch, blood-soaked display straight out of the Dark Ages.’

More than 125 Spanish towns and cities have declared themselves anti-bullfighting.

Surveys have shown that more than 80% of Spanish people oppose bullfighting, and approximately 56% fewer official bullfights took place in 2018 than in 2007 – but the tradition continues. Bullfighting also takes place in the south of France, and in Mexico, Columbia, Ecuador, Venezuela and Peru. Most recently, Spain’s right-way and far-right political parties promised to defend bullfighting in their election manifestos. Members of Spain’s royal family also regularly attend bullfights.

Catalonia banned bullfighting events in 2010 after the Canary Islands became the first region to pass a ban in 1991.

Pro-bullfighting groups have fought back against restrictions and sought to get the tradition protected under UNESCO’s cultural heritage list.