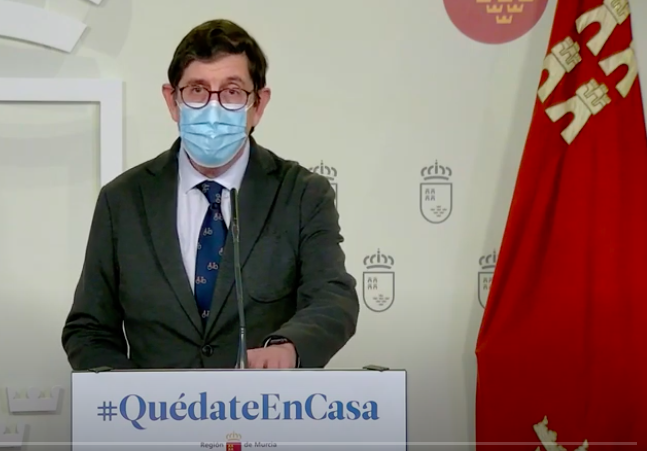 The top health official in the region of Murcia has resigned after admitting that he received the Covid-19 vaccine despite not belonging to any of the priority groups scheduled for initial jabs, such as frontline health workers and residents at care homes. The Spanish government has divided the population into 15 groups for its Vaccination Strategy.

The health official, Manuel Villegas, had initially refused to step down following reports in the local media of his early vaccination, but finally resigned on Wednesday.

He had justified receiving the jab ahead of other priority groups by saying he was a doctor and that his job led him to frequently interact with other health workers who had a high risk of infection.

‘My papers say I’m a doctor, they don’t say I’m a politician,’ he told a news conference on Wednesday, adding that some 400 members of his department had also already received the jab. ‘It was a decision that I believed in and I continue to stand by it,’ he said.

‘Today it is my turn to say goodbye to an admirable man … Villegas has been exemplary and his performance has been impeccable,’ he told a news conference.

The resignation of Manuel Villegas in Murcia follows on from the news in the Valencia region last week of a young socialist couple who are mayor and mayoress of neighbouring towns in the province of Alicante – and who also received jabs of Covid-19 vaccines despite not being in high risk groups.

Ximo Coll, mayor of El Verger, and his wife Carolina Vives, mayoress of Els Poblets, were both vaccinated – and five other doses were given to Guardia Civil and local police officers. Coll told the EFE news agency that he received a call from the health centre saying that seven doses of the vaccine had been left over as two health workers were in quarantine, two had flu and a further three didn’t want to have the jab. ‘Without hiding anything and with no malintent,’ Coll went to the health centre with his wife and had the jab.

The Valencian health department has opened an investigation, saying that protocol must be followed in the distribution of vaccines, but it seems the married mayors aren’t the only ones to have been vaccinated, as Fran López, mayor of Rafelbunyol in the Valencia region, also had the jab at the end of December despite not being in a high-risk group.

Latest figures (up to 20 Jan) show that Spain has now received 1,346,100 doses of Covid-19 vaccines (from Pfizer-BioNTech and Moderna), and that 1,025,937 jabs have been administered. This is 76.2% of total vaccines received. 15,642 people have received a second jab. For the amount of vaccines received and administered for each region, see: Covid-19 Vaccinations in Spain

ALSO READ: Opinion: ‘Queue jumping doesn’t only happen in Spain, but they’re good at it’