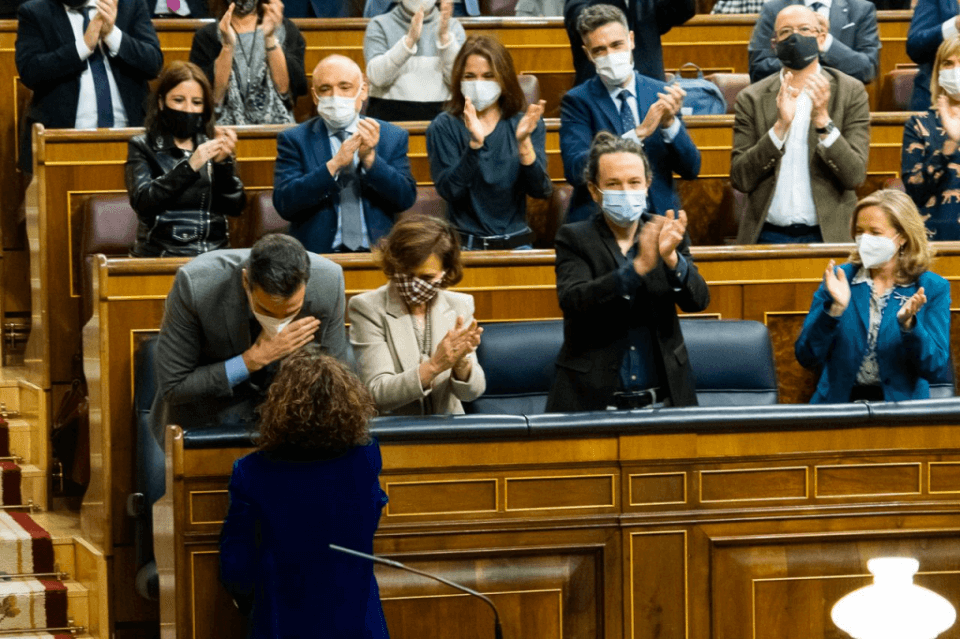 Spain’s left-leaning PSOE–Podemos coalition government led by Prime Minister Pedro Sánchez secured passing its first budget in the Spanish Congress on Thursday, with 54% of the votes in the 350-seat chamber. It is Spain’s first new budget since 2018, and the first full-year budget since 2016. In other years, budgets have been rolled over from year to year, for lack of a majority. The bill will now go to the Spanish Senate, and where any amendments will then be voted on by Congress before the end of the month.

The government had presented the 2021 budget plan in early November, with the key points being to raise taxes on corporations and the wealthy in order to fund investment in infrastructure, social care and the health system, as part of its ‘progressive’ agenda.

The PSOE socialist party and left-wing Podemos group have a total of 155 seats in Congress (120 PSOE and 35 Podemos – with the latter being an alliance between Podemos and the United Left party). They also secured the votes of the Esquerra Republicana (ERC) party (13), the Basque Nationalists (6), EH Bildu (5), PDeCAT (4), Más País (2) as well as the single MPs from Compromís, Nueva Canarias, the Regionalist Party of Cantabria (PRC) and Teruel Existe.

The right-wing People’s Party (PP) with 88 MPs, centre-right Ciudadanos (Cs) with 10, and Spain’s third-largest party, far-right Vox (52), all voted against the budget.

The government celebrated its triumph with a long standing ovation in the chamber, and in the absence of the main opposition leader, Pablo Casado of the PP, and Santiago Abascal of Vox.

Announcing the budget plan back in November, Pedro Sánchez had said that public spending would be 10% higher than in 2020, to include 27 billion euros from a massive European Union Coronavirus recovery plan agreed back in July. The amount of money allocated to public spending is ‘the most ambitious in our democratic history’, he said.

‘This is a progressive budget,’ Sánchez had said. ‘It is exceptional due to the situation and because of the amount of public investment involved.’ He explained that the first goal was to rebuild what the Coronavirus crisis has taken away from the economy, the second ‘to modernise our productive model’, and the third ‘to shore up our welfare state’.

The 2021 budget will bring higher corporate taxes on big companies, a raise in the income tax on high earners, and a hike in IVA (VAT) on sugary drinks.

The 2% increase on income tax for high-earners will only apply to those making more than €300,000 a year, up from an initial threshold of €130,000. It is estimated that it will apply to 0.17% of taxpayers, although deputy prime minister and Podemos leader Pablo Iglesias presented the increase as a first step to further reforms.

Higher corporate taxes are expected to affect just 0.12% of Spain’s companies yet yield 1.52 billion euros. ‘Those who have more will contribute more,’ Iglesias had said.

‘We are inaugurating a new stage in Spain’s economic policy, which definitely leaves behind the neo-liberal stage of austerity and budget cuts,’ added Iglesias.

Coronavirus in Spain (2 Dec) – incidence rate now down to 251

Coronavirus in Spain (3 Dec) – incidence rate now down to 240

Carles Puigdemont to be released by Italian police, with first hearing Saturday