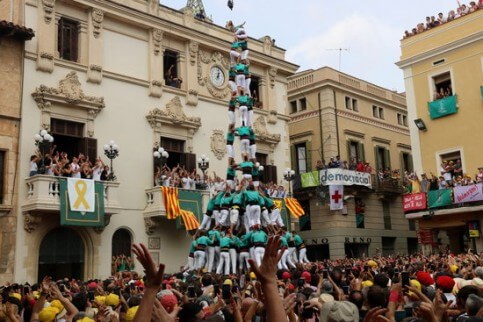 In the region of Penedès, arguably the heart of one of Catalonia’s finest wine-growing areas, and where cava is not only a festive drink but a highly profitable business, another quintessentially Catalan tradition runs strong: human towers.

In Vilafranca, one of the region’s biggest towns, this tradition is lived out at least once a year and is followed with as much expectation as the most crucial of football matches. And the 2019 date has come.

Sant Fèlix (Saint Felix), celebrated on 30 August, is honoured with a human tower building session. They are made by large groups of people known as ‘colles’ that form tiers of differing sizes, with those above balancing on the shoulders of those below. There are typically one or two ‘colles’ per town present at the event.

According to the specialised media outlet elmoncasteller.cat, spectators can expect up to 10-tier tall human towers, which is the highest number seen in this tradition.

More than one of the groups may try to build such a tower, with three to four people per floor, or others such as the 8-tier tall towers with one person per floor.

What are human towers

Declared Masterpieces of the Oral and Intangible Heritage of Humanity by UNESCO in 2010, Catalonia’s human towers -or ‘castells’- are one of the country’s most unique customs.

The tradition first documented in the 17th century sees large groups – known as ‘colles’ – forming tiers of differing numbers of people standing on the shoulders of those below them.

A human tower is only complete once a child called the ‘enxaneta’, who can be as young as five, clambers to the very top of the structure and raises their arm.

The towers are a common – and breathtaking – sight in towns squares all over the country, where they are built during local festivals to the sound of traditional ‘gralla’ flutes and drums.

‘Castells’ will often come crashing down, although the ‘castellers’ have their own human safety net in the dozens of team members supporting the tower’s base, or ‘pinya’.

There are ‘colles’ in towns and cities all over Catalonia that spend months practising at building the tallest and most complex human constructions.

Each ‘colla’ is distinguished by the colour of its shirts, and ‘castellers’ wear traditional garb of white trousers and a wide black sash around the waist, providing back support and a foothold to help team members climb up or down the tower of people.