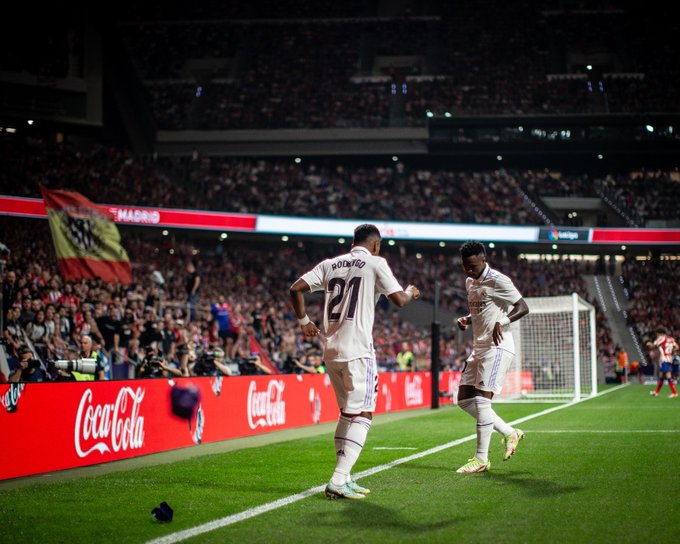 Spanish Prime Minister Pedro Sánchez criticised football club Atlético Madrid on Tuesday for not taking a stand against the racist chants from some of their supporters aimed at Real Madrid winger Vinícius Júnior.

The club later released a statement [see below] saying the abuse was ‘unacceptable’ and that they would not stop until the culprits were found and banned. The club said the racist chants provoked ‘enormous repulsion and indignation’.

Some sectors of the crowd had chanted ‘You are a monkey, Vinícius, you are a monkey,’ before and during Real Madrid’s 2-1 win at Atlético’s Metropolitano stadium on Sunday. Missiles including lighters were also thrown at him, together with his Brazilian compatriot Rodrygo as they celebrated a goal.

‘I’m a big supporter of Atlético Madrid, so I was very sad,’ Sánchez told Politico while at the United Nations General Assembly in New York.

La Liga will report the events to the Spanish Football Federation’s disciplinary committee but Atlético did not comment until Tuesday afternoon [see full statement below].

‘Atlético Madrid condemns the unacceptable chants that a minority of fans sung outside the stadium before the derby,’ said the club.

‘A few cannot stain the image of thousands and thousands of Atlético fans who support their team with passion and respect for the opponent.’

‘The pain the Rojiblanco (Red & White) family feels for what happened is enormous. We cannot allow our fan base be related with this type of behaviour and question our values because of a minority who do not represent us.’

The storm had been sparked after Pedro Bravo, the head of the Spanish football agents association, said while a guest on a television sports talk show, that Vinícius needed to stop ‘acting the monkey’ when dancing to celebrate goals. Bravo later apologised, saying he was using a phrase which was not intended to have racist connotations. The phrase is commonly used in Spain to mean ‘playing the fool’.

Vinícius was reportedly upset about Bravo’s comments. The 22-year-old Brazilian, who is set to make it to his first World Cup in November, said his actions on the field were ‘being criminalised’, and that his success as a black Brazilian man in Europe was ‘annoying’ to some.

On Sunday in the derby, with their samba-like moves after Rodrygo had just scored Real Madrid’s first goal  against Atlético Madrid, Rodrygo and Vinícius made it clear they will not be backing down from the racist language from their critics or by the racist chants from the opposing fans.

‘Dance wherever you want,’ Vinícius wrote on Twitter in a message directed at Rodrygo after Real Madrid’s 2-1 win.

‘White and BLACK dance,’ Rodrygo posted not long afterward, along with the photo of the young Brazilians celebrating together.

‘They have no place, not just at a sporting event but in any sphere of life,’ said Almeida.

‘I think what we have to do is identify these people because I don’t think they are worthy of coming in. It is absolutely reproachable and needs to be condemned. I say this both as the mayor of Madrid but also as an Atlético fan. I am ashamed that there are Atlético fans capable of uttering this type of racist insult.’

It isn’t the first time Vinícius has been subjected to racist taunts. It also happened last year during a Clásico match against Barcelona at the Camp Nou. There have also been cases against other players, including Athletic Bilbao’s Iñaki Williams.

Below is the full statement in English from Atlético de Madrid:

‘Our club has always been known for being an open and inclusive space for fans of different nationalities, cultures, races, and social classes, and a few cannot tarnish the image of thousands and thousands of Atleti fans who support their team with passion and respect for their opponents.

These chants provoke enormous repulsion and indignation. We will not allow any individual to hide behind our colours to utter insults of a racist or xenophobic nature. At Atletico de Madrid, we have zero tolerance for racism, our commitment to the fight against this social scourge is total, and we will not stop until we eliminate it. To this end, we have contacted the authorities to offer them our full cooperation in the investigation of the events that took place outside the stadium. We ask them to identify the people who participated to proceed with the immediate expulsion of those who are members of the club.

We would also like to invite all professionals involved in the world of football to reflect deeply. Making clear once again our strongest condemnation of these events, which have no justification whatsoever, we believe that what has happened in the days leading up to the derby is unacceptable. Fans are asked for sanity and rationality, and during the week, professionals from different fields generated an artificial campaign, lighting the fuse of controversy without measuring the repercussions of their actions and manifestations.

The pain felt by the Red & White family for this event is enormous. We cannot allow anyone to link our fans with this behaviour and question our values because of a minority that does not represent us. Our decision is firm and emphatic. We will not stop until we expel those involved from the Red and White family because they cannot be part of it.’