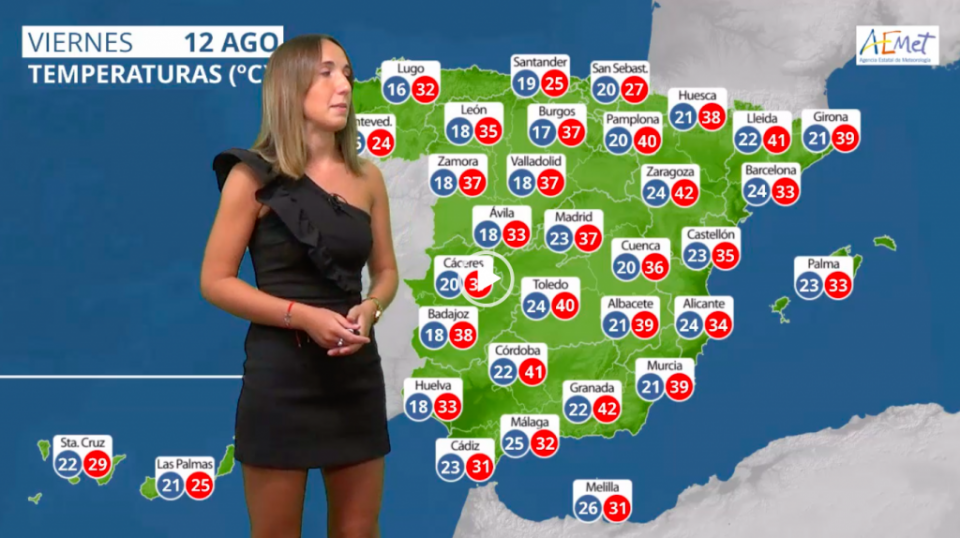 Spain is experiencing another ‘final heatwave’ of the summer this week, coinciding with the Spanish government’s new decree that orders many establishments to set their air-conditioning at a minimum level of 27C, as part of the country’s new energy-saving plan.

The intense heat that Spain has seen this summer is due to end on 14 or 15 August, however, according to Spain’s state meteorological agency AEMET.

The swelteringly weather will continue over the next few days and will rise to 35C across much of the country between Thursday and Saturday, before finally subsiding on Sunday, AEMET has said. Temperatures could rise above 40C in Zaragoza, Granada, Córdoba and Lleida on Friday, according to AEMET’s latest forecast (see main image screenshot). Click here for AEMET’s main page.

In a series of tweets (see link below), AEMET said that ‘with the data currently available, the current warm episode, which began on 30 July and will end on 14 or 15 August, will probably be classified as a heatwave, so that this summer we will widely exceed the record for days under a heatwave, with more 40 days.’

Earlier this week, the national weather office confirmed that Spain has seen the hottest month of July in more than six decades, since official records began in 1961.

Spanish reservoirs are at just 40% of capacity on average in early August, well below the 10-year average of around 60%, official data also shows.

‘We are in a particularly dry year, a very difficult year that confirms what climate change scenarios have been highlighting,’ Energy Minister Teresa Ribera told a news conference on Monday, also highlighting that the drought was leading to devastating wildfires.

AEMET spokesperson Rubén del Campo described the next few days as ‘the final firecracker’ of the summer.

‘As of Sunday we expect a change in the prevailing atmospheric conditions,’ said del Campo, who added that Spain will experience cooler surface air, which will cause a drop in temperatures ‘in most of the country’.

Storms have also been predicted following the sharp drop in temperatures, which will mostly be seen in the northeast of the country and in the Pyrenees.

Del Campo has warned that despite the cooling temperatures, the sea will remain much warmer than normal, particularly between the Balearic Islands and the Valencia region.

AEMET also tweeted that 29.72C had been registered by the Valencia state buoy at 5pm on Tuesday, a ‘historical maximum of surface temperature of the sea water at this point’. Up until now, the maximum had been 28.65C, registered on 7 August 2015.

Don’t you mean that establishments must set their aircon at a MINIMUM of 29C? If it were a maximum, then they could still set it at 20C or whatever they do now.

We have changed it to ‘minimum’ as, yes, it is clearer – but by previously putting ‘maximum’ it was meant as the ‘maximum lowest temperature’!