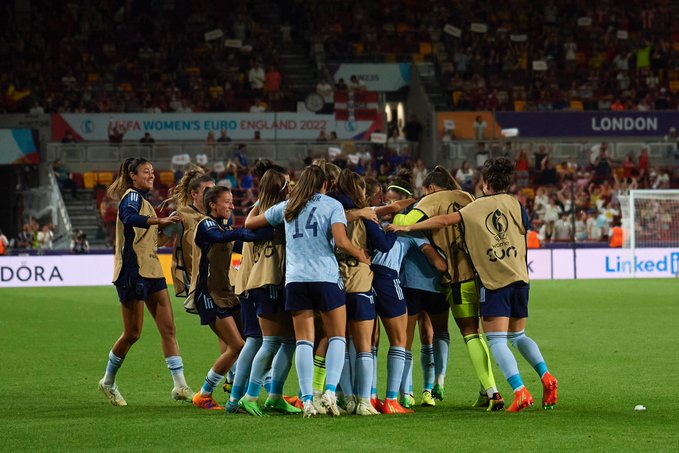 Spain will play the host nation England in the quarter-finals at the UEFA Women’s Euro Championship after beating Denmark 1-0 to finish second in Group B on Saturday.

The clash will see two of the tournament favourites battle it out as they look to take another step towards the final at Wembley on 31 July.

Denmark, losing finalist in the last continental showpiece in 2017, exits in the group stage.

A draw would have been enough for Spain to hold onto second place and it took until the 90th minute for Marta Cardona’s header to clinch the victory.

Spain will play England on Wednesday on the south coast in Brighton.

England have had their place in the last eight secure for some time, having guaranteed top spot in Group A with their 8-0 thrashing of Norway. They closed out the group stage in style on Friday with a 5-0 win over Northern Ireland to make it three wins out of three.

Germany had already clinched top spot in Group B before beating Finland 3-0 in Saturday’s other game. There were goals from Sophia Kleinherne, Alexandra Popp and Nicole Anyomi.

Germany, who won the last of its record eight European titles in 2013, will play Austria in the last eight on Thursday in Brentford.

Click here for all news on the Spanish women’s team on the UEFA Euro Championship official site.

Wildfires rage in Spain, with over 3,000 evacuated from homes in Andalusia