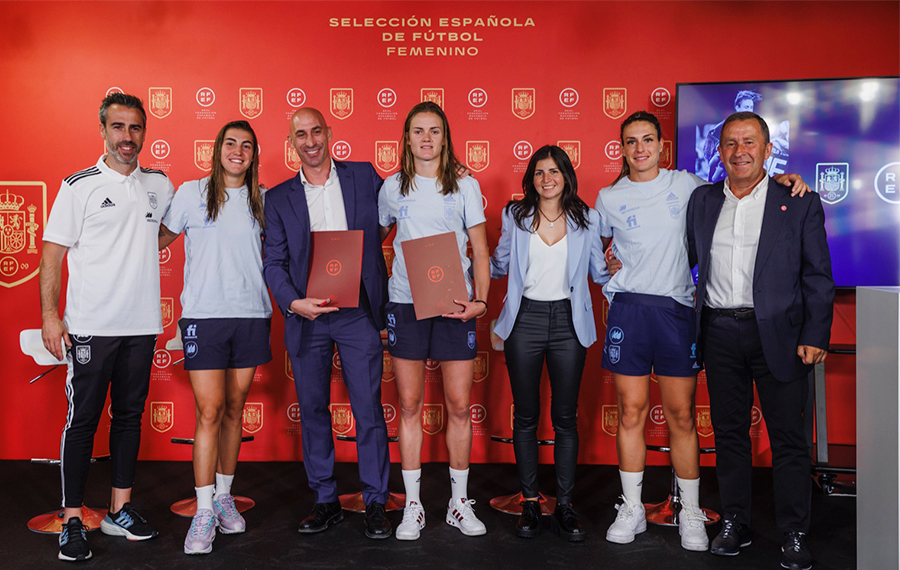 Spain’s female footballers are to receive the same percentage bonuses as their male counterparts, as part of a new five-year agreement announced by the Spanish Football Federation (RFEF) on Tuesday.

The deal will also see the women’s football players receive money from future sponsorship arrangements, income from image rights, as well as improvements in the team’s working conditions.

The agreement comes into force immediately, with Spain among the favourites for this summer’s UEFA Women’s Euro Championships, which get underway in England next month.

‘We have agreed with the Spanish Women’s National Team the amounts that will be allocated in bonuses and image rights during Euro 2022 and for the next five years,’ the RFEF said in a statement.

‘Through the agreement, the bonuses received in percentages by the players are equal to those received by the [men],’ the statement read. ‘In addition, the image rights that the players will receive are regularised and improved, while significant improvements in working conditions have also been agreed upon.’

Spain has become the latest country to sign an agreement of this sort, and it follows new collective bargaining agreements announced by US Soccer last month.

‘This is an important day,’ Luis Rubiales, the president of the RFEF, said. ‘The agreement we have signed is at the forefront of world football. The five-year deal will cover upcoming World Cups, European Championships and, we hope, the Olympic Games.’

‘We have to promote women’s sport. We are working to shorten the distances with the men and we are grateful to the players for trusting in the benefits of this agreement,’ he added.

Despite saying the percentages of bonus payments would be the same as the men, Rubiales did not give examples of the figures involved.

Players don’t earn fixed salaries for representing their countries but are instead paid in various ways, depending on each federation. It can be through appearance fees, bonuses for progress at major competitions, image rights payments or a cut of sponsorship agreements.

Spain kick off their Euro 2022 campaign against Finland on 8 July before taking on Germany and Denmark for a place in the knockout stages.

The team are among the favourites for the competition thanks to Barcelona’s success in club football, with a large part of their squad coming from the Catalan side, including Ballon d’Or winner Alexia Putellas.