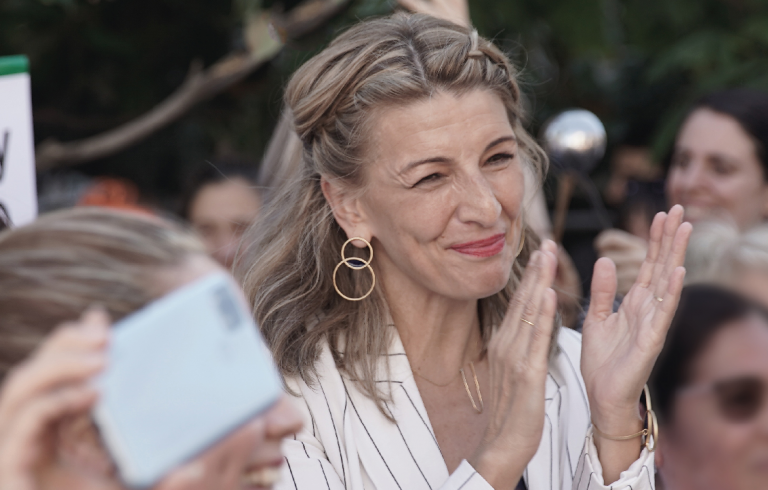 Spain’s popular and charismatic Labour Minister, Yolanda Díaz, launched a new left-leaning political movement on Friday, ahead of the country’s next general election expected in late 2023, and promised a new way of doing politics.

Díaz said she would now go on a nationwide ‘listening tour’ in order to gather ideas about what the Spanish people want for their country, and then decide whether the movement would take part in the next election with her at the helm.

‘In this citizens’ movement, I am just one more piece. You are the protagonists and if you want I will step up,’ she told a crowd of around 5,000 people gathered at a Madrid cultural centre on Friday.

Díaz said the new movement called ‘Sumar’ (meaning ‘to add’ in Spanish) would seek ‘a new social contract’ and work to put an end to the politics of ‘confrontation’.

Politics should be about ‘extending a hand, and then being able to reach agreements that change people’s lives,’ she said.

‘Our democratic societies carry too many wounds and the political parties do not seem capable of offering substantive solutions, nor above all a horizon for the future,’ states the Sumar manifesto on its website. ‘But the citizens who know that politics is the only tool for ordinary people to transform reality are waiting for us. Sumar wants to be a tool at the service of the country and widen democracy.’

Recent opinion polls have consistently indicated that Díaz is Spain’s most popular politician. As labour minister, she was responsible for a recent labour reform which is credited with a sharp fall in the number of temporary job contracts. ALSO READ: Permanent job contracts reach record high in Spain, following labour reform.

She also oversaw a generous job furlough scheme at the height of the Covid-19 pandemic, which ensured people had an income even when large parts of the economy were closed due to lockdowns.

The launch of the new political movement comes as both the PSOE and Podemos have slumped in the polls, with Spain battered by high inflation as is the case across Europe.

The main opposition right-wing People’s Party (PP) have overtaken the PSOE as Spain’s most popular party, according to a poll published last Monday in daily newspaper El Pais.

The PP, which in April picked a moderate new leader, had 27.4% support, ahead of the PSOE at 26.3%. Podemos was in fourth place, behind far-right party Vox.

The PP last month secured a landslide win in a regional election in Andalusia, winning an absolute majority of seats in the former socialist stronghold. It will now govern the southern region, Spain’s most populous, on its own for the first time. ALSO READ: Spain’s main opposition party, PP, wins absolute majority in Andalusia election.

Sánchez to meet Aragonès on 15 July in Madrid, first official meeting since ‘CatalanGate’

Oldest European fossil of human ancestor from 1.4 million years ago found in Spain