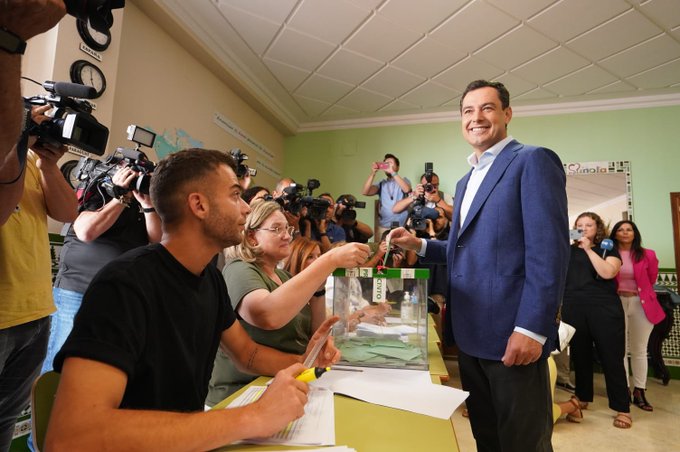 Spain’s main opposition party, the right-wing People’s Party (PP), won a resounding victory on Sunday in the elections held in Andalusia, the country’s most populous region (8.5 million inhabitants), highlighting the scale of the challenge that socialist Prime Minister Pedro Sánchez faces to win re-election next year.

The PP, led by Juanma Moreno, took 58 of 109 seats in Andalusia’s regional parliament, winning an absolute majority after ousting Sánchez’s socialists from power in a longtime stronghold in the 2018 elections.

The PSOE socialists won 30 seats, down by 2 from 2018. The far-right Vox party won 14 seats, making it the third-biggest political force in the region. In the 2018 elections in Andalusia, the Vox party took 12 seats, handing a majority to right-wing parties in the southern Spanish region governed by the socialists for more than three decades.

After Vox officially entered regional government for the first time after elections in February in Castilla y León, expectations had been that the PP would need to depend on the far-right group to form a government in Andalusia. The PP’s absolute majority rules this out.

Sánchez and his PSOE-led coalition government (with left-wing Podemos) have been struggling to cope with the economic fallout from Russia’s invasion of Ukraine, which has helped push inflation to the highest in more than three decades and sparked protests over soaring fuel prices in the euro area’s fourth largest economy.

Sánchez, 50, and in office since 2018, has indicated that he plans to call a general election in December 2023. While the PSOE retains a slight lead in national opinion polls, the PP has narrowed the gap in recent months.

The Ciudadanos (Cs), often referred to as a ‘centre-right’ party, failed to win any seats at all in Sunday’s Andalusian election, falling to zero from 21 seats won in 2018. The regional leader of the party, Juan Marín, announced his resignation as soon as the results were known.

With about 18% of the country’s population, Andalusia is a key battleground in a nation where politics is still often overshadowed by the Catalan independence crisis. The southern region is one of the poorest in the country.

Whilst the PSOE won the most votes in 2018, it wasn’t enough to form a government. PP regional head Juanma Moreno instead formed a coalition with the Cs party that was also reliant on political support from Vox. With Sunday’s results, the PP can now rule alone.