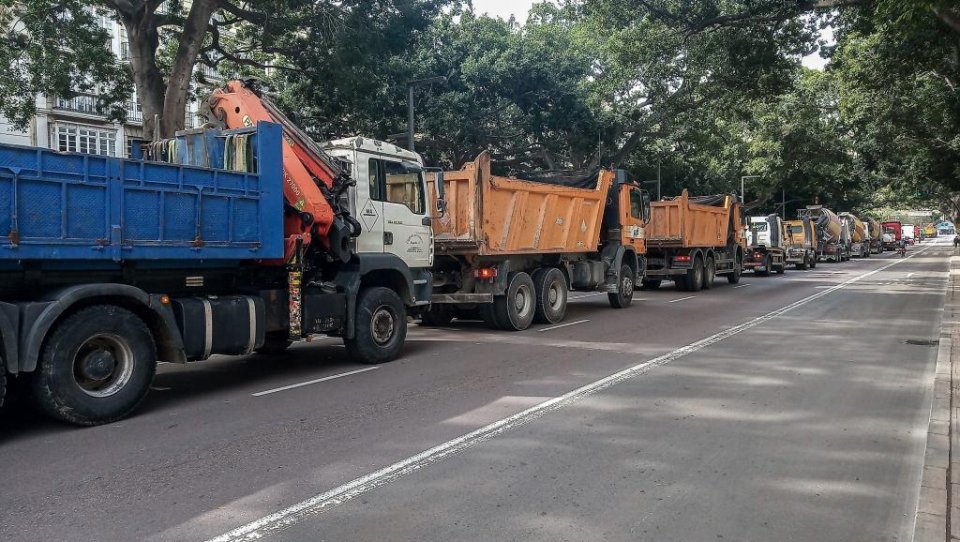 The Spanish government has now offered striking truck drivers a rebate on fuels, as well as a one-time cash bonus in an effort to end the stoppage that has led to shortages and pushed firms to scale back production.

However, the agreement has been reached by the government with the big transport employer’s association, without the participation of the group that directly called the strike, known as the Plataforma para la Defensa del Sector del Transporte de Mercancías, and which claims to represent may self-employed truck drivers. The self-employed truckers have since said they will be continuing to strike.

The group said it would not budge from its demands, which go beyond gas prices. It has claimed that large distribution companies engage in unfair competition, forcing down the prices for freight, and the group is seeking better working conditions for truckers, including being allowed to retire at 60.

‘After 12 days, we’re not going to throw in the towel. It’s now or never,’ the Platform said on its Facebook page.

The package of measures – a rebate of 0.20 euros per litre of fuel and a 1,200 euro bonus – will cost the government about 1 billion euros, Spain’s Transport Minister Raquel Sánchez told reporters after talks that ran through Thursday night.

The platform that organised the start of the strike was not invited to the negotiation by Sánchez, who even called its members ‘far-right’ at the beginning of the indefinite strike.

‘We have always been aware of the hardship that the transport industry like other sectors face as they are hit by the energy crisis that was intensified by the Russian aggression to Ukraine,’ she said on Friday.

The rebate on fuel prices, a quarter of which will be paid by oil companies, will also apply to other transport companies, she said. Bus, light truck, ambulance and taxi drivers will also receive smaller bonuses.

The strike began on 14 March when a group of drivers and small truck owners began blocking roads and ports in response to rising costs, which have been exacerbated by the Russian invasion of Ukraine.

Whilst the strike only involves a minority of drivers, it has caused huge traffic jams across Spain, leading some factories to halt production as they could not guarantee deliveries would be received on time. Also read: Strike by Spanish truck drivers provokes supply chain tensions.

Taxi drivers also stopped working in parts of the country and the national fishing fleet temporarily halted operations. Meanwhile, Spanish business associations have been complaining that the government had been slow to act compared with neighbouring France and Portugal.

Retailers have urged consumers not to panic buy and stressed that food supplies are guaranteed, although there are shortages of some goods.