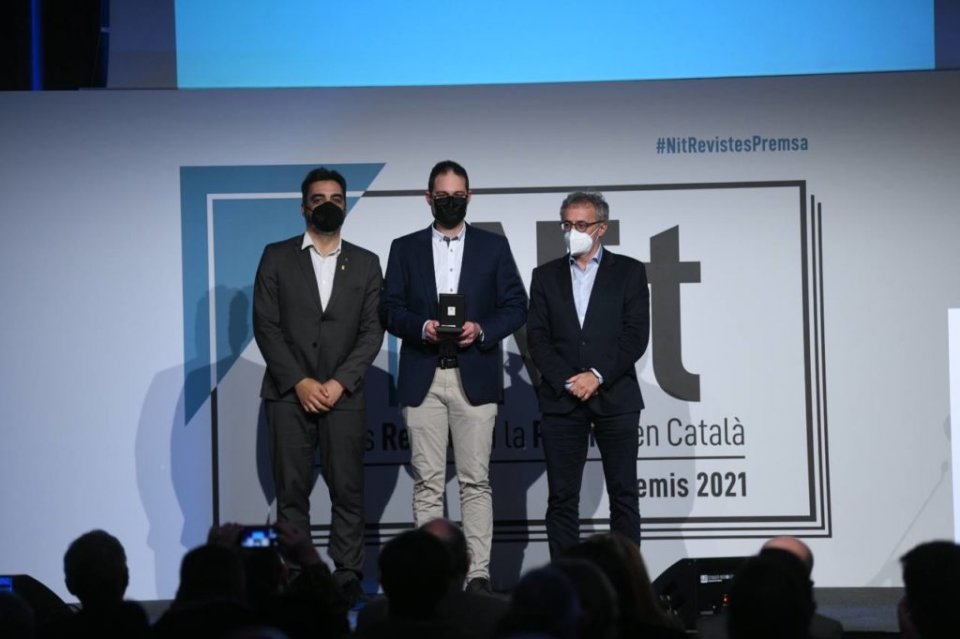 L’antiga fàbrica Damm – the old Damm brewery in Barcelona – ​​was the scene on Tuesday night for the Newspapers and Magazines in Catalan Awards (La Nit de la Premsa i les Revistes en Català), and in which L’Eco de Sitges received the award for the best non-daily newspaper. L’Eco shared prominence with 11 other media groups that received awards, as well as companies and individuals.

The prize for the best non-daily publication was given for the first time this year at the awards ceremony, and was also the last to be awarded at the end of the gala. It was presented by the Secretary General of Media at the Catalan government, Jofre Llombart, and was received by the editor of L’Eco, Magí Fortuny, and the president of Premsa de Sitges – publisher of the weekly newspaper – Santi Terraza.

During his thank you speech, Magí Fortuny highlighted ‘zero-kilometre journalism’, which ‘is still an essential link, not only to inform or control the management of institutions, but also to unite society and give voice to its most vulnerable citizens’. Fortuny also highlighted the important role of collaborators in L’Eco: ‘We have up to a hundred altruistic collaborators who put their grain of sand in the form of their own sections and opinion articles. Some of them have been writing for fifty years. It’s not a cliché: without their contribution, this weekly – their weekly – would not be possible.’

The Newspapers and Magazines in Catalan Awards – which celebrated its 21st edition on Tuesday – is the sector’s leading institutional event and in which the work of publications in the Catalan language are recognised annually. The awards are organised by APPEC with the Catalan Association of Regional Press (ACPC) and, for this year, the Catalan Association of Newspaper Publishers (ACED) also joined. The event was presented by the writer Màrius Serra and was attended by the president of the Catalan Parliament, Laura Borràs.

‘Sitges, the Christmas you deserve’

Sitges surpasses 5,000 Covid cases since the start of pandemic

New lines of aid approved for Sitges businesses and self-employed