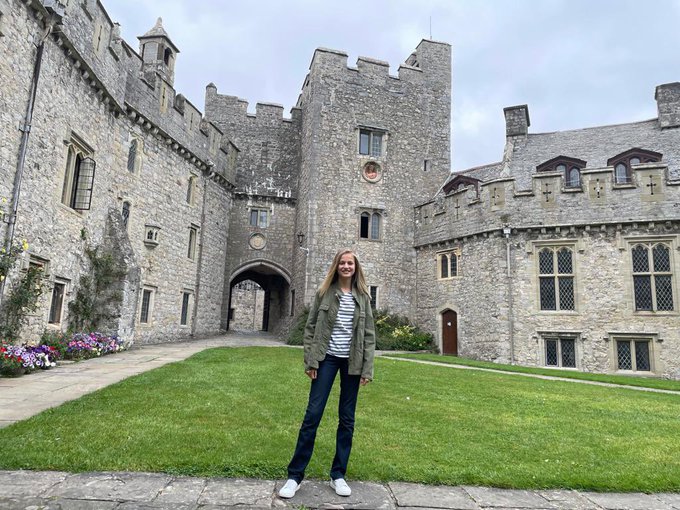 This week, Leonor de Borbón, whose official title is the Princess of Asturias, has moved to South Wales to start a new academic year at UWC Atlantic College, based at the 12th-century St. Donat’s Castle in the Vale of Glamorgan. Leonor, who turns 16 in October, is the eldest of two daughters of Spain’s king Felipe VI and queen Letizia.

Leonor will spend the next two academic years living at the boarding school. Her parents will personally meet the course’s full cost of £67,000 (approximately €76,000), a statement from Spain’s royal household stressed back in February.

The UWC Atlantic College is for students aged 16-19 years, and its website states that it seeks to ‘inspire changemakers’ who want to work for the common good. It looks for students who ‘can navigate the complexity of life and (reach) beyond easy answers’ [also see promotional video below]. The Spanish royal household statement also noted the school’s ‘open and critical approach’.

St.Donat’s Castle, where the school is based, is set in 122 aces of woodland and farmland. It became the home of the American newspaper magnate William Randolph Hearst in 1925, after he saw a feature on it in a magazine. Princess Leonor obtained admission to the school anonymously, taking several tests before being accepted, the royal household said. ALSO READ: RTVE regrets ‘Leonor leaving Spain, like her grandfather’ headline – for new school in Wales.

But what is life really like at such a school? And what kind of teenager, apart from a royal one, gets the opportunity to go there?

Extremadura-born Judíth Santano Merchán has the answers. The Cáceres-based journalist attended the school from 2003 to 2005 despite coming from a completely different background to that of the Spanish princess. Here she tells Adam L. Maloney what what the college was like, and what the teenage princess can expect …

How did you end up studying at UWC? Were you born into royalty?

No, I wasn’t born into royalty! Not at all. I’m from a small village in the Cáceres province. I was raised by my grandparents who were both farmers. There is no chance whatsoever that we could have afforded the fees. It was only the scholarship that made it possible. My schools in Extremadura were normal. I always studied in state education schools.

I first heard about the UWC application through my geography teacher at school. She told me about the possibility of applying for a scholarship to go and study at different UWC colleges around the world. I wasn’t the only one told about it. There were two others as well. We were picked out because of our good grades. But in the end, I was the only one who ended up going.

I had to write an anonymous article in order to apply. And a few months later, I was told that I’d been selected to go on to the next phase of the application process. I then had to travel to Madrid and set an exam as well as a psychological test and an interview. Another part of the process was to participate in group work with other applicants.

At the time, I was going to secondary school in Coria, a small village in Extremadura, and in the end I passed. I had the choice to go to some other colleges, too, but I liked the idea of going to UWC Atlantic College in Wales because it’s still close enough to home.

Are other students mostly from backgrounds of wealth and privilege?

This is quite difficult to answer because all the students are so different from one another. Overall, there were more than 300 of us. You could find some people there who were from royal families, like the Jordanian princess who studied there at the same time as I did, but there were also a lot of students there like me who had got in on a scholarship.

Some of my peers even came from refugee camps in Western Sahara and South Sudan. There were also places reserved for students with disabilities. I was friends with people from all types of backgrounds.

When you’re there, you don’t really notice who’s rich and who isn’t unless people talk about it, and we never did. We just spoke about normal teenager things, who fancied who, how our studies were going, what our countries were like and general gossip. It was a great experience.

Describe a typical day at UWC.

I would get up and go to the dining room. So does everyone. Then after breakfast, we would go to classes. It was on the Welsh coast in Vale of Glamorgan so it could be sunny in the morning and then start raining out of nowhere.

We would have a break for tea at 10.30am and then a much longer lunch break that I think lasted for around two hours. But it never really lasted that long because some of us still had to go off to an extra class within this time. It depended on your timetable.

The press has called it ‘Hogwarts for hippies’. How accurate is that?

I’m aware that a few royals and quite a lot of very wealthy people attended the college but it’s not only them. A wide variety of people from different backgrounds go there. We had the opportunity to go to class inside a castle. It was the type of learning environment that so many of us there would never have even dreamed of.

It’s a meeting point for people from all different types of economic and cultural backgrounds to come together. I didn’t even know most of the time which of my friends were rich and which were not.

The fact that the school is in Saint Donat’s Castle does make it a bit like Hogwarts, I suppose. The hippie part of that description might be down to the fact that part of the syllabus promotes human rights and a culture of peace which, in my view, is a great thing.

What career paths did your group of friends all go on to?

We have all gone down very different paths but one thing that we all have in common is the idea of changing the world somehow. Among my friends, who I still keep in touch with, are artists, activists, social workers and journalists such as myself.

I can only speak of my own group of friends but we all had priorities that came above simply making money. I’m a journalist now and over the years, I have worked with immigrant communities in Spain as well as in Chile. I’m also part of the local government now back in my village.

What do you think life will be like at UWC for the young princess?

I think it will be an opportunity for her to live among a diverse range of people in a totally different environment, and an opportunity to learn what it’s like to live with others, sharing a living space and facilities. Her life will be like that, sharing experiences, creating new bonds and learning about the rest of the world.

You can watch a promotional video by UWC Atlantic College below:

Spain carried out 107 arrests in major marijuana raids during summer