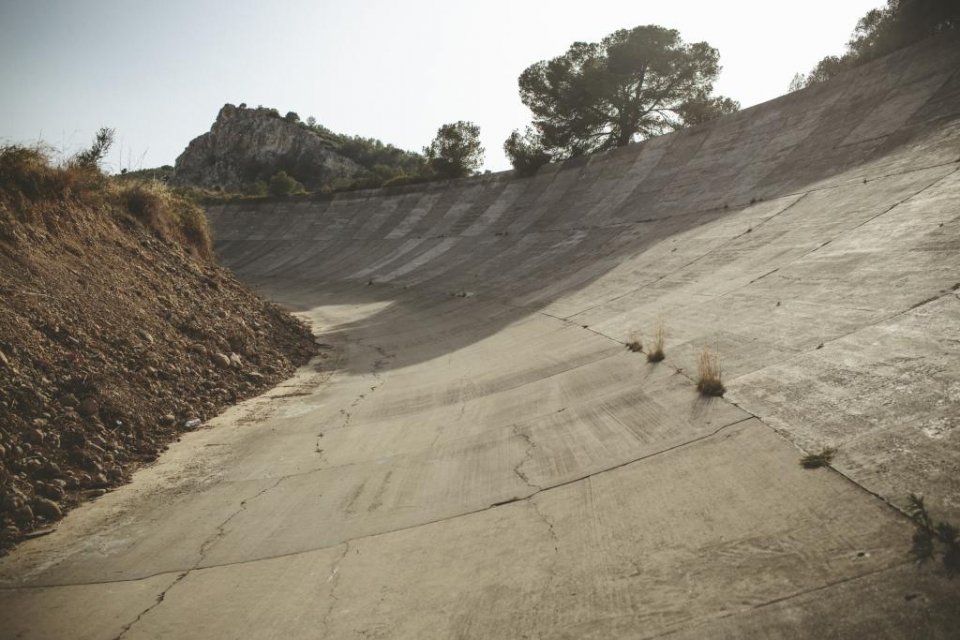 Nearly 100 years after it was built, the Autòdrom Terramar racetrack at Rocamar, Sant Pere de Ribes, is set to re-open in October 2023, reversing its slide into obscurity more than half a century ago. Plans are finally underway to bring glamour back to the oval racetrack in the shape of equestrian events and show jumping under the aegis of French specialists, the media and events group Grand Prix.

This hopes to emulate the original intention of the racetrack Autòdrom Terramar, which was to attract wealthy visitors from Barcelona to Sitges. Sabadell industrialist, Francesc Armengol, proposed the idea as part of plans to establish the Terramar area of Sitges as a ‘Garden City’ in 1923. Just as the French Riviera attracted wealthy visitors from northern Europe to the French coast, the Garden City of Terramar, Sitges, would attract the wealthy from Barcelona and beyond with its modernist mansions and beautiful gardens, access to the Mediterranean and the hotel and sporting facilities of the Terramar Hotel.

Sitges was already fashionable and full of untapped potential in those days before the Great Depression. Santiago Rusinyol had come to live in Sitges in the 1890s and continued to have a home in Cau Ferrat. Modernism and Noucentisme were still prevalent artistic movements and money was coming from the Americas in different ways.

Cultural sponsorship was offered by US industrialist Charles Deering for projects like the modernist Palau Maricel to house Spanish and Catalan art and the newly enriched émigrés returning from Cuba, dubbed ‘Americans’, wanted to build modernist mansions to trumpet their success and entertain their guests in their pleasure gardens.

The other great financial catalyst in Spain at the time was the cutting-edge motor industry. The racetrack added innovation, novelty, danger and glamour to the entertainment on offer, with its 60-degree, death-defying north bend, designed to counter gravity and centrifugal force, as racing car drivers hurtled along its 2km track at speeds of up to 180 kmh.

The track was inaugurated by king Alfons XIII in October 1923. The whole complex had been built in a staggeringly short period of time, between four and ten months, according to various accounts. It was hoped that it would shatter old Hispanic clichés of bullfighting and flamenco and equal if not surpass Brooklands, the Ascot of British motor racing in the Surrey and London stockbroker belt.

However, the track opened with huge debts. The purchase of the two properties on which it was built represented nearly a third of the original budget. These were large and of historical interest and one was refurbished as a royal place for the king but neither of them was exactly a castle. One was a Jesuit monastery, El Clot dels Frares, which had been used mainly for bathing in the summer months by the monks; and the other, El Clot d’en Sidós, was a private farmhouse. Both had seen their heyday in the 1700s.

Nevertheless, such was the furore about the project that the railway company even built a station next to the racetrack so that the public could attend easily and there were plans to build equestrian facilities in the centre and a lake for water sports.

The glitzy new racetrack staged the Spanish Grand Prix in 1927. It was a glamorous event to challenge Brooklands, Monza or Indianapolis and great names attended, either to compete and represent their cars, such as Bugatti, or to steal the limelight, like Hollywood goddess Mary Pickford, married to tycoon, Douglas Fairbanks.

Great old racing car firms were represented, like Hispano Suiza, Miller and Talbot, together with firms that have survived the test of time such as Opel, and interestingly Mercedes and Benz separately. The winner was Alberto Divo in a 1923 Sunbeam, followed by Count Louis Zborowski, in a Miller.

However, by the end of 1927 the racetrack was bankrupt. Francesc Armengol had increased the issue of shares from 700,000 to one million pesetas, which today would represent 45 million euros. There was so little money left in the pot that the prizes from the 1927 Grand Prix were never paid.

During the 1930s, the racetrack fell into disuse and the area was used to train soldiers during the Spanish Civil War. Since the racetrack was finally closed permanently in 1957, it has been used as a piston factory, a seed business and a chicken farm. It slowly became a faint echo of what it had once been, slipping into oblivion. What had been the Autòdrom Terramar was now known locally as the racetrack of Rocamar, ‘Sea Rock’, a geographical feature from which the less wealthy could have watched the races and the name of the present residential area near Sant Pere de Ribes.

Yet the desire to do something with the racetrack at Rocamar never died. It is a testament to the care and quality control of the materials and techniques used to build it that it is still intact, and it is the only oval racetrack in the world that still has all its original elements.

Thus, it is not surprising that recently a French company has taken as its name the initials of the original name, Autòdrom Terramar, AT, and has secured the rights to develop the complex. According to Matthieu Liard, executive director of AT, plans are in place to convert the whole site into an equestrian centre. Liard, also executive director of the media and equestrian events group, Grand Prix, that organises equestrian events in Fontainebleau, Paris, stresses that the new complex will allow equestrian events to continue beyond the present May to October season when it becomes too cold in northern Europe.

Spain has equestrian venues in Madrid, Alicante, Marbella, Jerandilla de la Vera, near Cáceres, and Ponferrada but there is presently nowhere in Catalonia. At Rocamar, on the border between Sitges and Sant Pere de Ribes, the infrastructure already exists in terms of travel, communication and tourism and the company plans to invest 20 million euros to restore the racetrack to its former grandeur.

In addition to its original function, the grandstand will also be redeveloped in glass to house restaurants as well as conference and exhibition facilities. Equestrian events would happen mainly between October and April but there would also be events staged during the whole year. The possibilities that the revamped grandstand offers for exhibitions and conferences will be second to none and Cupra, Aston Martin and Peugeot have all used the facilities, albeit in their original state, for marketing purposes already, Liard explained.

Permission to build hotels has been granted, he says, ranging from four to five stars, and 20 to 200 bedrooms with the construction sub-contracted. In other communications from AT, it is hoped that hotel revenue could total 10 million euros per year and the complex could provide 70 permanent jobs. The proposed location of the hotel complex is next to Clot d’en Sidós. It is on a hill just opposite the 60-degree north bend of the racetrack, with attractive views over the vineyards and hills of Sant Pere de Ribes, Sitges and the Mediterranean. The Autòdrom Terramar is due to open in October 2023.

However, the project has not escaped protest from an ecological point of view. The location of the racetrack presents problems as it is next to the Riera de Ribes, the dry riverbed of the Ribes river, on its south side. Only 2 km from the estuary which is a nature reserve, it is an important focal point for fauna and flora and there have been protests from many residents in Rocamar about the construction of a wall that has now been built between the residential area, the riverbed and the race track.

The Town Council of Sant Pere de Ribes allowed the construction of the wall to go ahead even though Rocamar’s residents claim to have previously filed a complaint against it and the matter is now to be decided by the Catalan Tribunal Superior. Meanwhile, 500 signatures or more have been collected by the online protest organisation SOS in order to minimise ecological harm. When asked about this aspect, Liard stated that access to the complex will be from Les Torres to the north, and not from Rocamar. He claims that the residents will benefit economically and entrance into the complex will be free of charge.

Whether you choose to call it the racetrack at Rocamar or the AT Terramar, the circuit has stood the test of time. The original speed record for the two-kilometre Autòdrom Terramar track was set at 45.8 seconds in 1923 by Count Louis Zborowski in a 1923 Miller. It took Carlos Sainz 89 years to break the circuit record, clocking 42.6 seconds in an Audi R8 LMS for Red Bull in 2012, on the original, unmodified track, even though it had not been used for half a century and was uneven and had grass growing between the cracks.

It may still have more to offer to pay back the 45-million-euro equivalent that it took to launch the original plan. Locals hope the benefit from the similarly huge investment of 20 million euros required to modernise and re-equip the complex will be equitably profitable for the area. As the French Riviera attracted wealth to the south of France in the past, the present rebirth of the Sitges Terramar City of Gardens project could bring new prosperity to Garraf and Costa Daurada one hundred years on. Sant Pere de Ribes and Sitges could become centres of equestrian excellence with all its trappings like Badminton and Burghley, a Fontainebleu for the winter season.

A shorter version of this article was published in L’Eco de Sitges (20 August). Please also see videos below.

Jeremy Ottewell is the author of The Chronicles of the Forgotten Kingdom.

Here is a video of original images of races at the Autòdrom Terramar at the end of the 1920s.

Here is a video of Jeremy Clarkson, Richard Hammond and James May of the Grand Tour programme (Amazon Prime) testing an Aston Martin, Jaguar and a Honda at the Autòdrom Terramar in 2018.